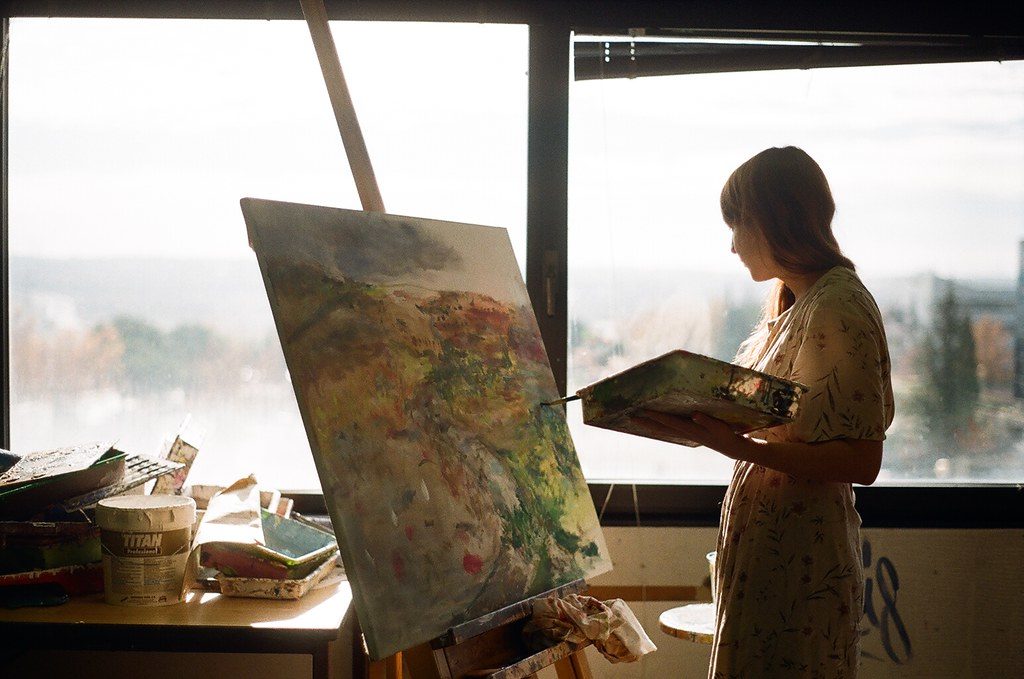 An artist working in her studio (not the person in this case study). Image: Rowena Waack via Flickr used under (CC BY-NC-ND 2.0)

Sonya is a disabled visual artist, arts worker and consultant who has been working self-employed for decades. She is a painter who makes her living through commissions, presenting at conferences, mentoring other artists, residencies and running her own studio. She is also a board member of an arts organisation. An average week for Sonya includes working in the studio on commissions, responding to emails, chasing leads for new projects, working on ongoing projects, setting up and attending meetings across the country with new clients and self-promotion. Typically, two days will be spent on admin, one on meetings, one on commissions/making work and one on workshops or mentoring. Sonya has an unchanging physical impairment which means she needs support when working in the studio, when travelling and with some admin.

“The whole process can be frustrating and quite demoralising. But once it’s set up, it generally works perfectly fine. If I didn’t have Access to Work, I wouldn’t be able to do my job, I’d have to give it up. How many countries in the world really have a system like Access to Work?”

“I’ve found that you have to phone them up to begin the process. That first point of contact who simply takes your details can’t actually do anything, they just hand them on to someone else. It takes 14 working days for them to get back to you. I find the questions they ask on the forms quite confusing.”

“Even though there are lots of inconsistencies and you can get frustrated with Access to Work staff, they are usually very personable and whilst they might not understand what you do, they are generally understanding.” 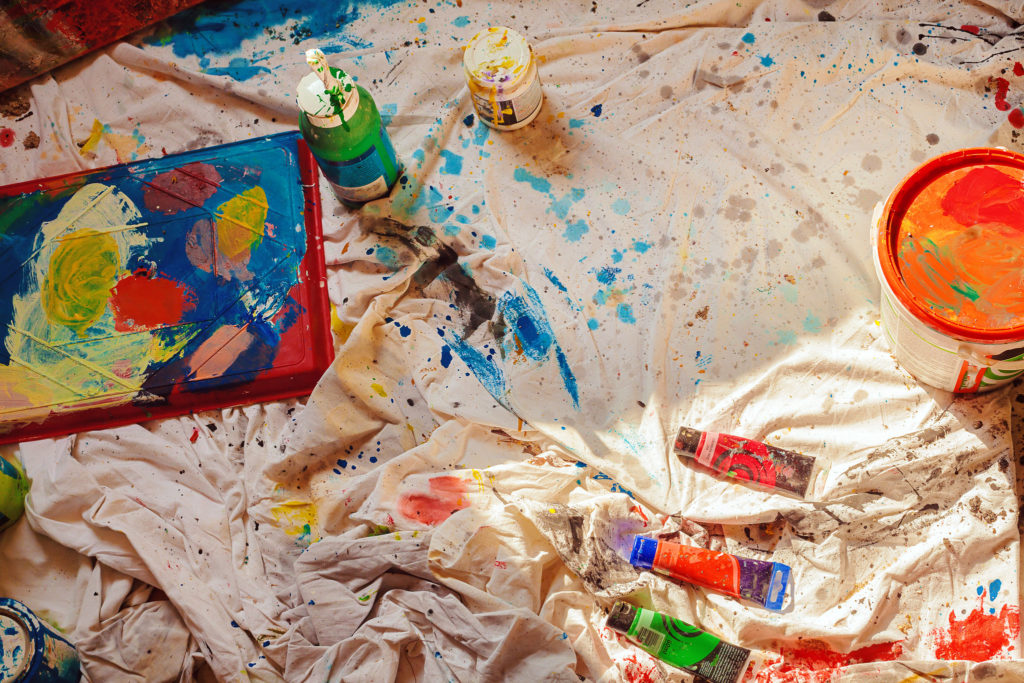 Painter’s colors on pallet. Image: Dejan Krsmanovic via Flickr used under (CC BY 2.0)

Sonya’s initial application took 2-3 months. Each time she has to reapply the length it takes for the process to be completed varies wildly. Last year took 3 weeks, whereas this year took nearly 8 weeks.

“In the early days it used to be a lot easier and more streamlined because you dealt with the same person all time. But that seems to have changed now and you speak to a different person every year and you have to re-explain everything all over again. For a person with an [invariable] impairment like mine, things are not going to change, unless the work changes.”

“I was told about three years ago I had to reapply every 12 months but when I spoke to them this year they said I would get the support assigned for three years but you still have to speak to them on an annual basis.”

What support was applied for

In Sonya’s original application as an employee at an arts organisation, the support offered was mostly equipment such as a specialised desk, writing machines and speech-recognition software – plus training to use the software. She didn’t find any of this particularly helpful and now Sonya applies for support worker hours instead.

In her most recent application she applied for 31 hours a week of support worker time, which she was granted. She also applied for two days a month for administrative support to fill in the Access to Work claim forms, but was only granted four hours. 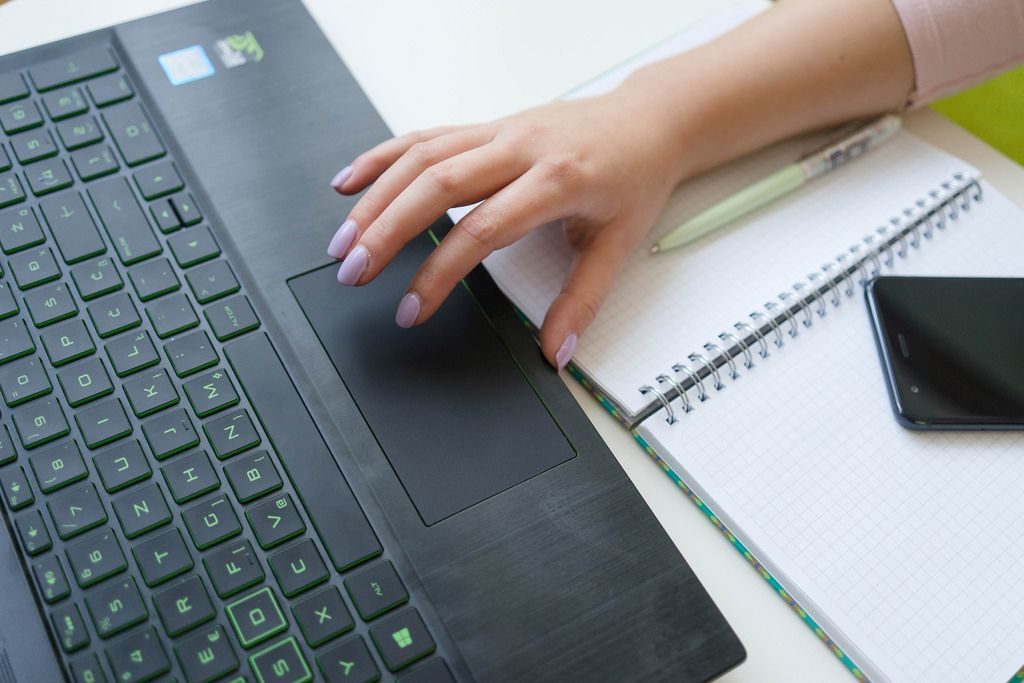 “Administrating the claims every month takes too much time. Time which is taking me away from doing my other paid work. I applied for support to help with administering the claims process and the Access to Work employee said they’d never heard of this being granted. Then she said the £12 an hour I was quoted for this support was more than she got paid. I explained that she isn’t self-employed. When she went away and looked into it, she realised I could get this sort of support. But it shows they aren’t necessarily aware of their own rules.”

“There’s lots of niggly rules in the claims process which seem arbitrary. For example, they insist the forms are printed double-sided, which can be a challenge if your printer doesn’t have that function. A massive barrier is it seems that every year about six months in you send in your claim forms as usual, the way you’ve been sending them all year – and then they send it back to you and say they want it presented differently, with no prior warning!”

“My Access to Work contact this year asked why my income was lower compared to the previous year. I just don’t think they understand the nature of self-employment. You have to justify everything – and that can knock you back and be demoralising.”