Over the past few months, I have been collaborating with the Hebrides Ensemble and Drake Music Scotland. I was initially commissioned to write a work for members of Hebrides Ensemble and  Drake Music Scotland’s Digital Orchestra, an ensemble of disabled musicians who play using a variety of digital instruments. This resulted in the creation of my new work Symphonies of Instruments which premiered as part of Diversions at the Queen’s Hall, Edinburgh on 12th December 2019. 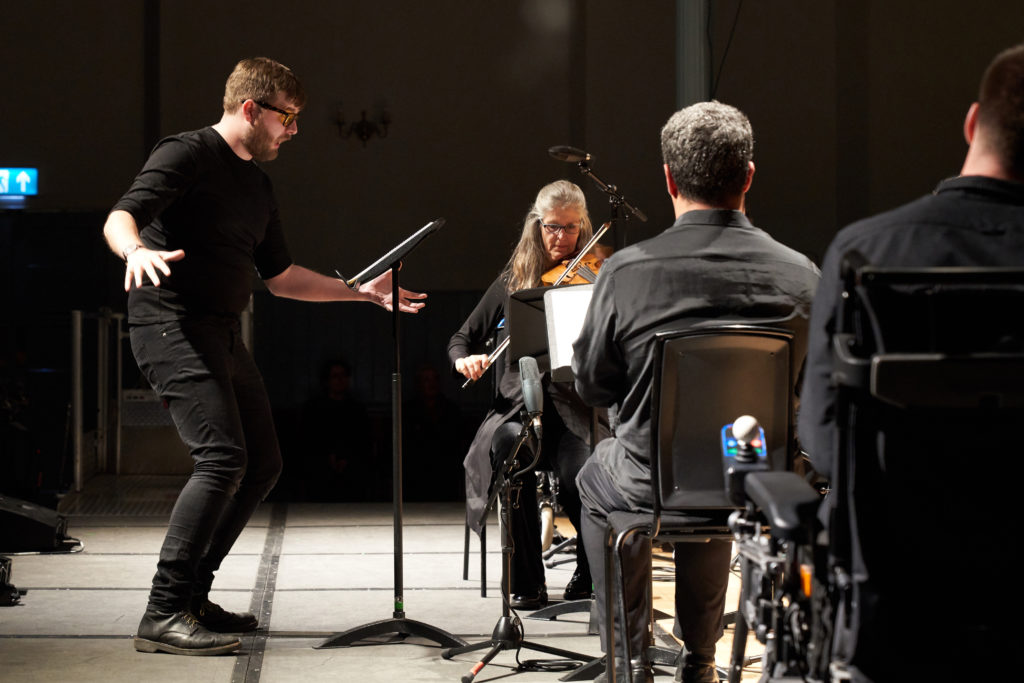 The experience of collaborating with the Digital Orchestra has been a truly wonderful one, however for me what makes this particular collaboration stand out is the resulting concert we have produced. As many in the disabled community know, discussions of equality within the arts often forget disabled people; this I would argue is even more prevalent within music, probably because of classical music’s obsession with virtuosity. So, finding a concert that retains the integrity of a profound concert but is also physically accessible is rare to say the least.

When we started the discussions of what should the concert look like, there were many interesting ideas of what could have been done; however, I wanted to use this collaboration to try something that has only happened on two prior occasions. Thanks to many activists, concerts celebrating women composers are becoming increasingly common, and thanks to groups like Chineke, concerts celebrating non-white composers are finally gaining ground. With this in mind, I was adamant about using this as a chance to showcase disabled composers.

Concerts of this nature are incredibly rare, I feel this is because producers and institutions are only really beginning to understand that disabled people might actually like to play music, let alone make music that rivals THE greats. To make this a really enticing concert, we had to make sure the composers chosen are not only highly gifted individuals, but also give a taste of the broad spectrum of music making that is happening amongst Britain’s disabled community.

Overall, nine composers featured in the concert, all of whom deserve to be programmed and celebrated like any other composer working today. The concert featured two of Drake Music’s Emergent Composers Lucy Hale (2017) and Ewan MacKay (2019), it showcases the award-winning Rylan Gleave, as well as talented individuals like Rhona Smith, Joe Stollery and Benjamin Teague.

As part of this process, I was also fortunate enough to be commissioned to do research and produce a document advising organisations on how to not only make concert more inclusive of neurodivergent individuals, but to also show ways in which accessibility can be used creatively, instead of a tatty bolt on.

Alongside the production of this document, we were tasked to make sure what was discovered in the research process was implemented as successfully as possible. This has meant consulting and advising the Queen’s Hall on adapting their accessibility information, as well as preparing quiet spaces to wind down after becoming over-stimulated. In short, we pushed to make sure this concert proved that once neurodivergent people are in a comfortable, welcoming space, they can respond to music with the highest intellectual rigour possible.

This concert is arguably unlike anything Scotland has seen and will be a real treat for the ears and is not to be missed.