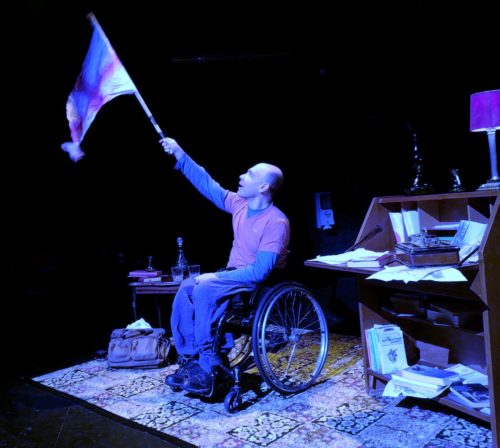 Andrew McLay as Murphy in Another England

I went to see the Little Cog production of Another England on its opening night at the ARC in Stockton. I have huge admiration for Vici Wreford-Sinnott’s writing and was expecting a play that told the truth about the horrific times we are living in, with a sense of urgency … and that’s pretty much what we got.

The play is a two-hander set in the round (although in reality it’s more of a square). Philippa Cole and Andrew Mclay are convincing protagonists as Rat and Murphy, two disabled people who come together in a derelict house. Rat is on the run from the authorities. It’s 2024 and all disabled people are having their identity numbers removed from national records and are being rounded up and sent to detention centres across the UK.

When Vici originally started writing the play a few years ago it was a near-future dystopian vision, but with the deaths of over 130,000 people due to austerity and the persistent ongoing attacks on the welfare of disabled people through government policy; the denial within the media and the constant untruths told by politicians on the amount of money spent on the welfare budget. (Why is it that they never explain how much of the figure they quote is spent on the bureaucracy dedicated to preventing support of disabled and sick people?).

Having become a fan of Years and Years the Russell T Davies drama being broadcast on BBC currently, the thematic connections between the scenarios being put forward in both dramas are immediate and chilling. The casting of disabled actress Ruth Madeley as a somewhat naive and hapless victim in the television piece, proffers a very real sense of the false hopes of many young disabled people that we are living under a system that has their interests at heart.

In Another England, Cole’s disabled character Rat – on the other hand – was born after her mother attended a protest against the Criminal Justice and Public Order Act 1994 – and was destined to be a fighter. She reflects the ideals of feminism; of freedom and justice as opposed to Mclay’s wheelchair-user Murphy who is a symbol for reactionary attitudes born of fear and hatred.

The drama unfolds around the point of tension between these two very different people, reflecting opposing ideals. We are continually taken back in time – into the pasts of each of the characters individually as the drama unravels, underlying motives are revealed and we move towards a resolution. But equally we go back in time to significant individuals from parallel historical times when the far-right came into vogue – Europe in the 1890s and again in the 1930s.

There is a third England above and beyond the conflict between these individuals in terms of what they represent as allegory. And so, for example, within Murphy we see the spirit of Oswald Mosely, leader of the British Union of Fascists in the 1930s. In contrast Rat at one point reveals an aspect of herself in conjuring a powerful and wonderful visual image of Jane Avril, the French disabled can-can dancer made famous through the paintings of Henri de Toulouse-Lautrec – as a symbol of a disabled woman who fought against oppressive circumstance to gain agency and independence.

Another England is a many-layered and complex piece of writing that pulls the audience in. I loved the considered way the staging of the piece is described in an incidental and naturalistic way, giving a poetic license to audio description and enhancing the visual elements of the work as an integral part of the script.

How great it would be to see it on the main stage of the National Theatre!