I am pleased to say that I am going to have a painting – albeit one made nearly 30 years ago – in an exhibition coming up, curated by DAO’s own Dolly Sen. Art & Protest: What’s there to be mad about? is on exhibition at Bethlem Gallery from 7 September to 8 November 2019

I have had a connection with the mental health system since early childhood, which led to my involvement with the Campaign Against Psychiatric Oppression in the mid-1980s and then to being involved with Survivors’ Poetry at its outset in the early 1990s.

So what is there to be mad about? I produced Dreams of the Absurd – an exhibition of paintings, prints and drawings that reflected my experience of being disabled by Psychiatry and which illustrated mental events that were a part and parcel of daily life and the fear of psychiatric treatment that was at the foundation of my existence.

I grew up seeing the psychiatrists’ role being to murder and to torture people, because that’s what I saw happening to my family. In my teens and early twenties I went into the lions den and volunteered in two long stay institutions to try and understand how and why this was happening? And my belief was reinforced. It matters not that there is little scientific basis to Psychiatry’s belief in mental illness. Our collective belief in medicine is so strong that we will see a loved one murdered and still say it was “because of the mental illness”. And medicine’s collective delusion in its actions is so strong that it continues to believe it is acting out of the individual’s best interests. 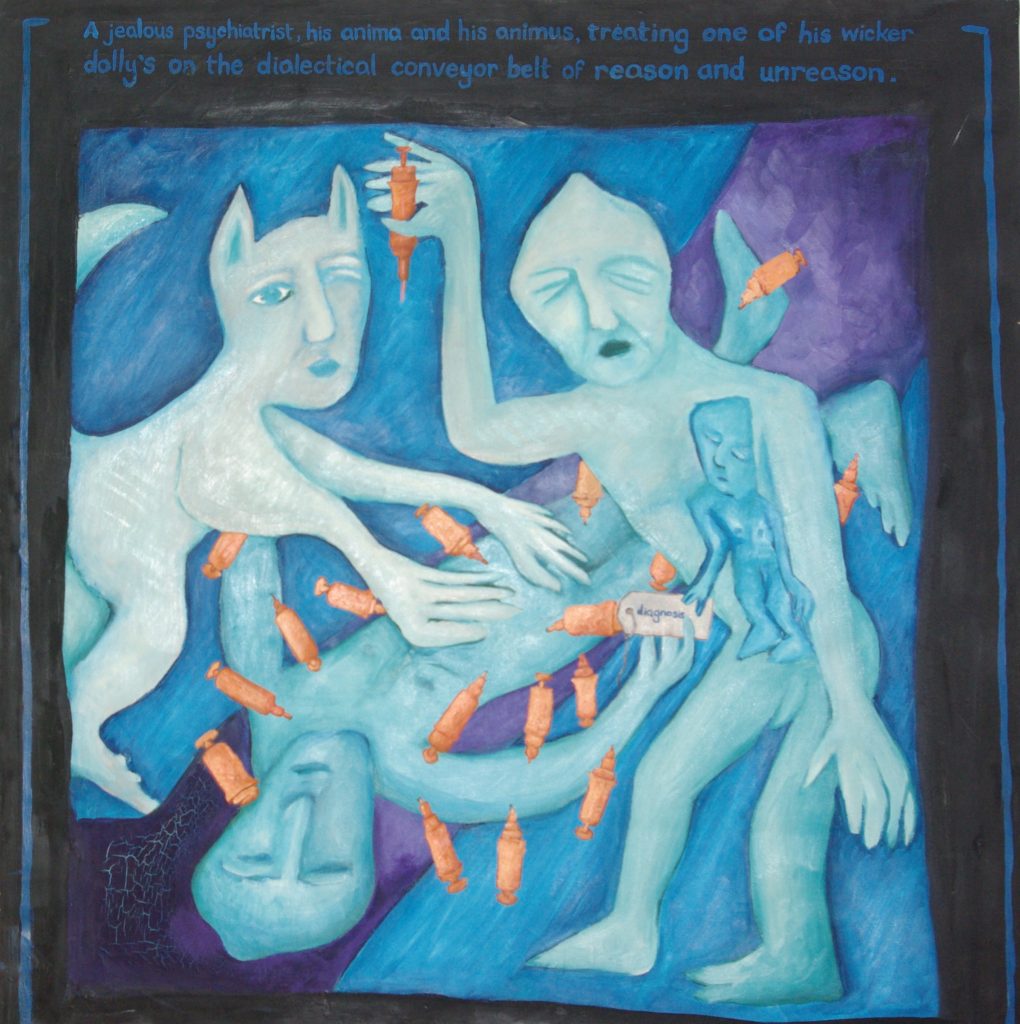 ‘A Jealous Psychiatrist, his animus and one of his wicker dolly’s on the dialectical conveyor belt of reason and unreason’. Oil on canvas. Image © Colin Hambrook

‘The Jealous Psychiatrist’ was one of a series of paintings, which explores the relationship between current psychiatric practice and the persecution of witches from the 16th to the 18th centuries. A common practice at witch trials in Britain was the use of the ducking stool where a witch if drowned when lowered into water was declared to not have been a witch, but if floated was declared in allegiance with Satan and was killed anyway.

The artwork reflects the parallel between beliefs in witchcraft and beliefs in mental illness as pathological disease. The painting expresses the continuity of ways and means that society uses to control individuals deemed to be ‘other’. A psychiatric patient is declared to have insight if they conform to the idea that they are subject to a psychopathology and therefore in current parlance to be in recovery.

However if a person rejects diagnosis and refuses the idea of having a mental illness, they are deemed to be lacking insight and historically have been subjected to even more punitive forms of ‘treatment’ with sectioning, neuroleptic drugs and electric shock ‘treatments’.

We are in a catch-22 situation where the tools for understanding the dilemmas we face when we go through difficult mental experiences are in the hands of those who control the language around mental distress. The symptoms around mental distress have been medicalised to such a degree that the authorities can and will get away with telling any lie and presenting it as truth. For instance the NICE guidelines have said for decades that withdrawal from anti-depressants lasts for a week. It’s taken years of campaigning and an epidemic situation where 1 in 6 of us are taking their shitty drugs for the guidelines to be revised. Who wins eh, who wins from peoples’ misery?

Bethlem Gallery presents Art & Protest: What’s there to be mad about?

one of my favourite pics

Loved seeing it at the exhibition