Boris Johnson didn’t like it when MPs stood up to him in parliament and prevented him from carrying out what he wanted, and he was similarly antagonistic towards the judges who declared that his suspension of parliament was not legal. 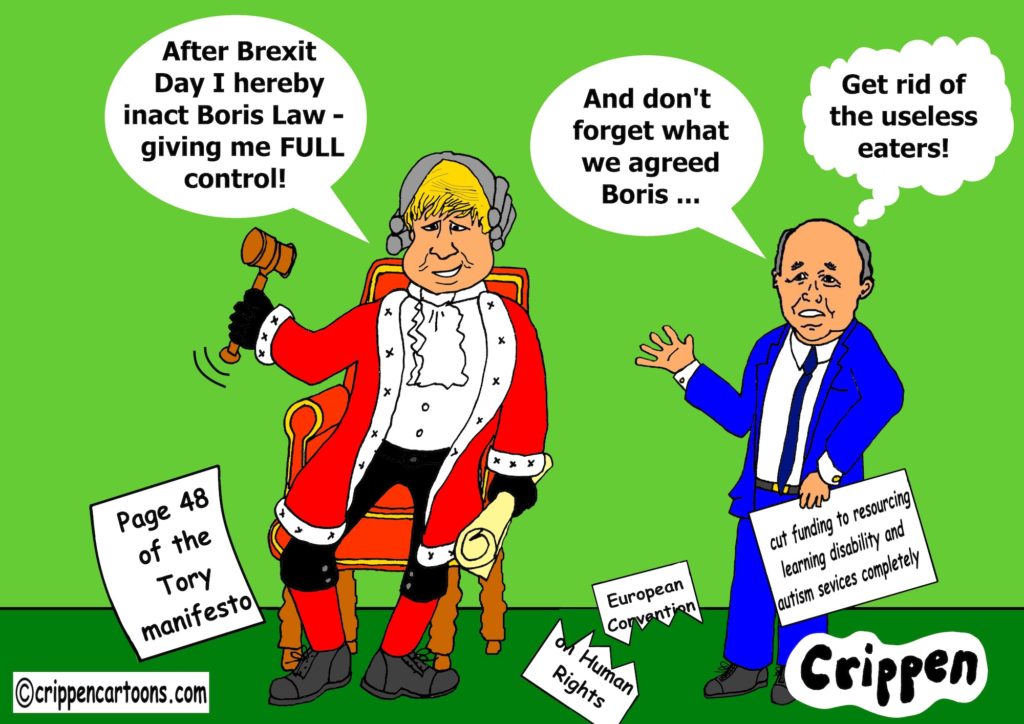 Now that Johnson has been re-elected, and with a large majority, he will most certainly take steps to curtail the powers of MPs and judges so that similar situations cannot occur in the future.

Hidden away on page 48 of the Conservative manifesto is an Orwellian indication of this. It reads:

“After Brexit we also need to look at the broader aspects of our constitution: the relationship between the government, parliament and the courts”.

However, page 4 of the costing document attached to Page 48 is much more sinister and has a direct impact on disabled people. The table sets out their commitment to cut funding for resourcing learning disability and autism services from 23million per year to zero in 2023-24.

I presume that this is the deadline they’ve given themselves for killing off all the useless eaters!

Glad to see Crippen back and shooting with both barrells as usual. We need to stand up to Boris and his Brexit cronies. As disabled people we are seem as being useless eaters and we all know what happens when the right wing get their teeth into us!

I read a quote from Michael Rosen today http://michaelrosenblog.blogspot.com/2014/05/fascism-i-sometimes-fear.html
“I sometimes fear that
people think that fascism arrives in fancy dress
worn by grotesques and monsters
as played out in endless re-runs of the Nazis.

Fascism arrives as your friend.
It will restore your honour,
make you feel proud,
protect your house,
give you a job,
clean up the neighbourhood,
remind you of how great you once were,
clear out the venal and the corrupt,
remove anything you feel is unlike you…

I must admit that I’m getting more than a whiff of fascism whenever Boris opens his mouth. Should I start portraying him in a nazi style uniform yet … or is it too early?!