During the period 2011 to 2014 when Iain Duncan Smith was secretary of state for work and pensions and had overall responsibility for the running of the department, over 70,000 claimants were underpaid by some £340 million after being transferred from older benefits on to the employment and support allowance (ESA).

Of these, five thousand chronically ill and disabled people have died before they could be reimbursed for the error that left them thousands of pounds out of pocket.

Marsha de Cordova, the Labour MP and disability rights campaigner, described this as a “national scandal”. She explained that the Government has been conducting a review of cases potentially affected by the error, which arose when some people who were receiving incapacity benefit and severe disablement allowance had their claims converted to contributory ESA. 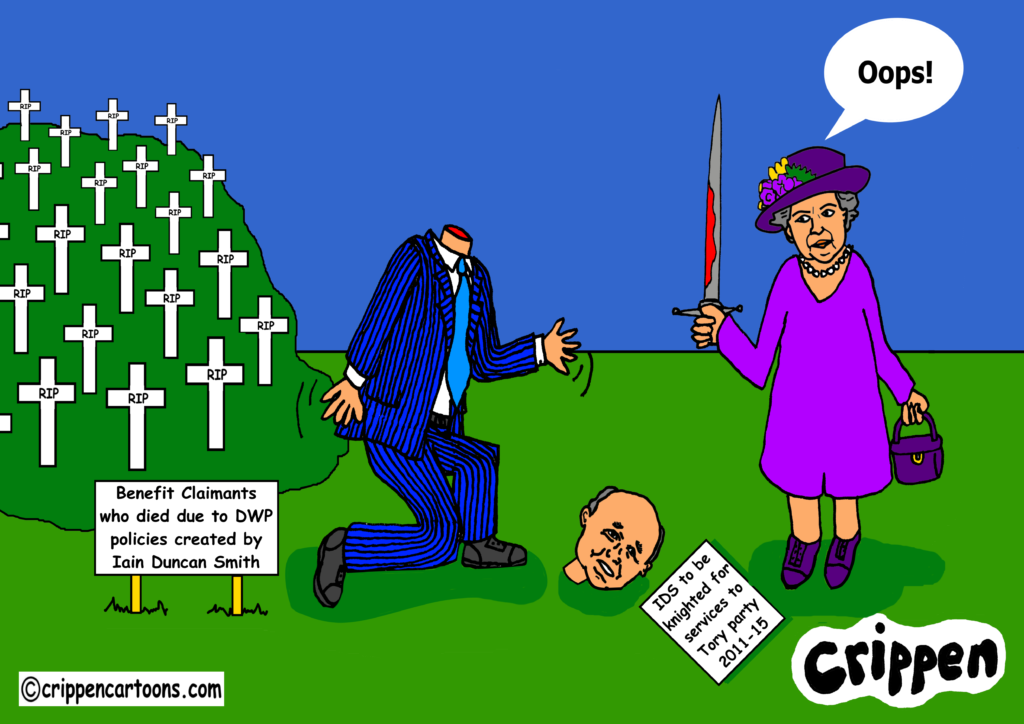 Death due to error cartoon © Crippen

However, officials at the Department for Work and Pensions (DWP) failed to follow their own legal guidelines governing the transfer process, meaning that in many cases they failed to properly check claimants’ full entitlements. The review has been looking through 600,000 potential cases of those who missed out. Some 122,000 people have now been repaid £5,000 each on average, according to the new figures.

Iain Duncan Smith, who was in post for all but the last few months of the period covered is held to account by a damning public accounts committee (PAC) report.

The cost of fixing the error, which the PAC report said stemmed from a string of avoidable management failures, was expected to cost the DWP at least £340m in back payments to claimants and £14m in administrative costs. In the meantime, Iain Duncan Smith was awarded a knighthood by the prime minister Boris Johnson in the 2020 New Year’s Honours List … WTF?!