As Dominic Cummings whispers in Boris Johnson’s ear about letting the elderly and vulnerable die off to help the economy, an open letter from Dr Matt Morgan, Intensive Care Consultant, from the University Hospital of Wales, Cardiff, has generated much more speculation about the lack of available treatment for the Corona virus 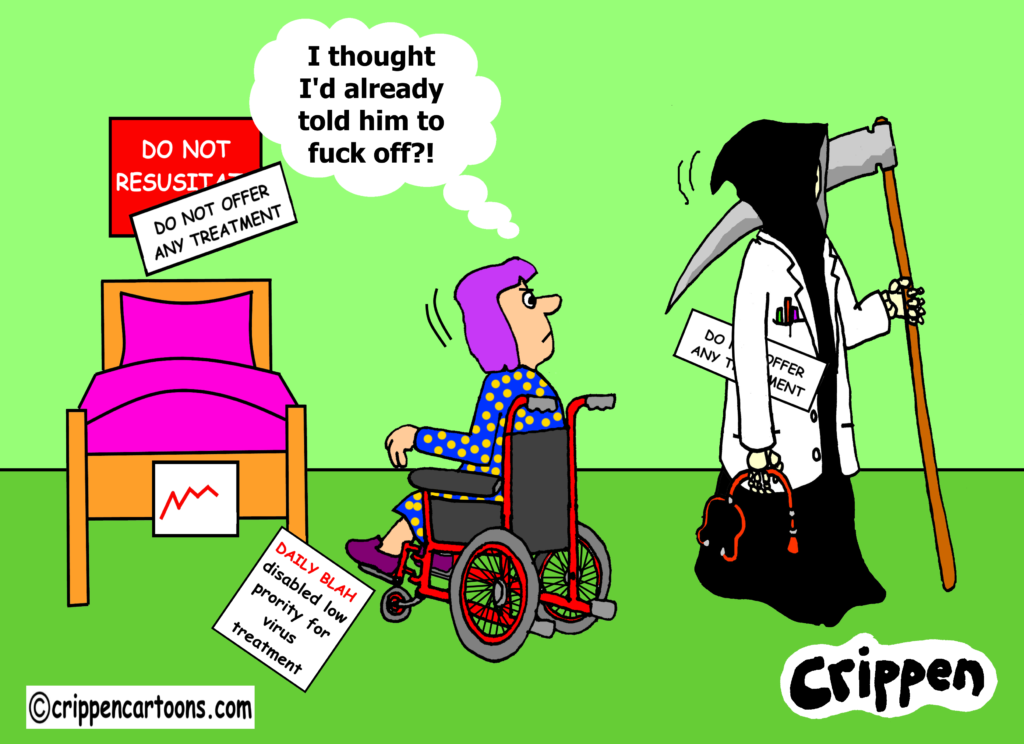 He wrote: “We will be honest, we will hold your hand, we will be there. [Sometimes] intensive care offers no fix… but there is always care.”

According to government sources overwhelmed doctors will be given new guidelines to help them make life-or-death decisions about coronas virus victims if they run out of intensive care beds or ventilators.

The criteria – expected to be issued on shortly – are a recognition that hospitals are likely to be faced with terrible choices in the weeks to come and cannot be expected to make them alone.

They will cover patients with certain conditions, although it is unclear whether they will also set an age limit above which treatment could be withdrawn.

Potentially, it could also see a patient already on a ventilator removed to allow someone with a greater chance of survival to take his or her place.

It is understood the guidelines have been put together in little more than a week. This explicitly sets out the “comorbidity” – the level of sickness – criteria that will decide access to intensive care and ventilators, and potentially age.

Underlining the speed of the move, it comes only a few days after Boris Johnson suggested such fateful choices would be left to local hospitals. The prime minister told the Commons the issue was “one that is not unknown to the medical profession, and we will be relying on the clinical decisions of those medical professionals”.

The move follows terrible scenes in the worst-hit parts of Italy, branded “an apocalypse” as older and sicker patients are rejected for treatment in favour of the younger and fitter.

In the UK, the low number of ventilators is already a huge controversy. The NHS has just 4,000 – forcing the government to put out a desperate appeal for manufacturers to urgently build more.

A young female wheelchair user in a night gown is alongside of her hospital bed. At her feet is a newspaper that reads ‘Daily Blah – disabled low priority for virus treatment’. Above her bed is a sign that reads ‘do not resuscitate’ which is partially obscured by another sign that reads ‘do not offer any treatment’. The grim reaper is walking away from her in a white coat carrying one of the ‘do not offer treatment’ signs under his arm. He has a stethoscope around his neck and is carrying a large scythe. The disabled woman is thinking: “I thought I’d already told him to fuck off?!”

pleased to say the amazing barrister Steve Broach is on the case and a legal challenge to these horrendous guidelines is imminent.