Responding to a survey after the National Audit Office found that at least 69 suicides could be linked to problems with benefit claims over the last six years, Dr Chris Allen a Consultant clinical psychologist with the Berkshire NHS Foundation Trust, writes:

“Current explanations of suicide suggest that a sense of not belonging and feeling a burden are important triggers for suicide attempts, so it’s no surprise that stopping benefits, or handling them badly with people already prone to such feelings due to mental health problems, has led to an increase in deaths (Dozens of suicides linked to handling of benefits claims)

“When worth is increasingly defined by ability to be economically productive, and mental health issues are discounted as a reason to not be in the workforce, the underlying message is that you are a burden and that you don’t belong. 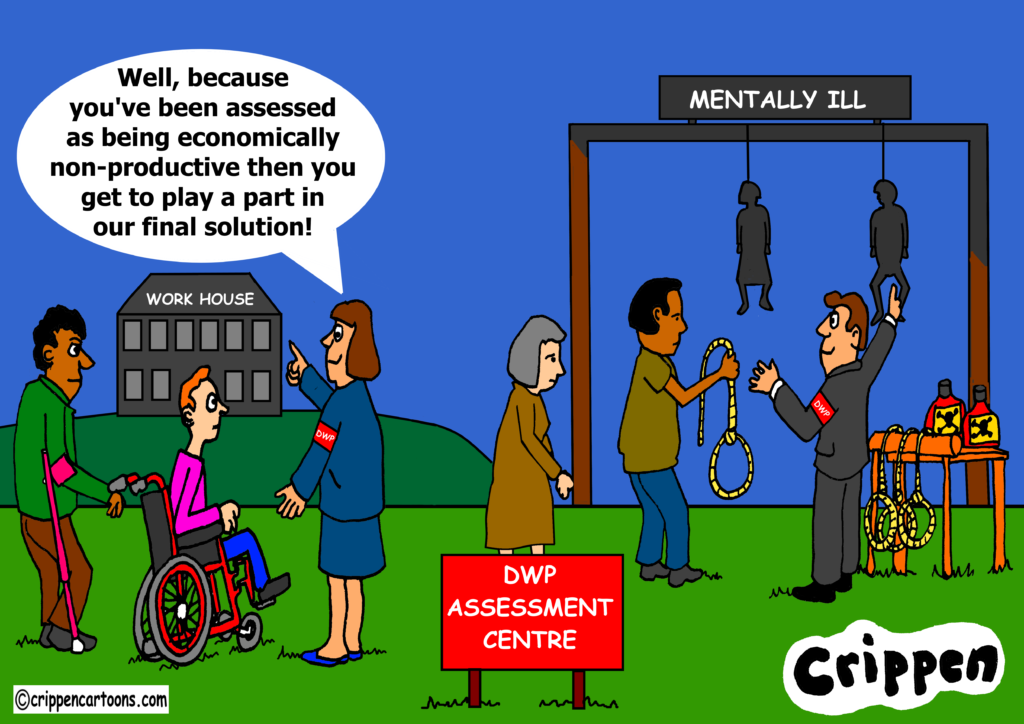 “Indeed, this link of a society that increasingly defines worth via ability to work may also be contributing to rising suicide rates for men aged 20-24 when they try to join the workforce and develop careers, men and women aged 45-49 when they can be facing a plateau in their careers and redundancy, and older men who can be more prone to defining value via work role.

“A compassionate society would care for people experiencing difficulty, recognise that contributions can be made outside work, and facilitate this, rather than communicate a sense that if you cannot work you may as well be on the scrapheap, or even not here at all.”

Having had several friends who have taken their lives after failing the DWP work assessment tests, I feel strongly that we need to bring these issues more to public attention. I hope that my cartoons are doing this, even though they may cause some distress to friends and relatives of those who have found themselves in this position. It is certainly not my intention to cause more distress but to raise enough awareness that this cycle of destruction caused by the DWP is stopped. Please let me know what your thoughts are on this …