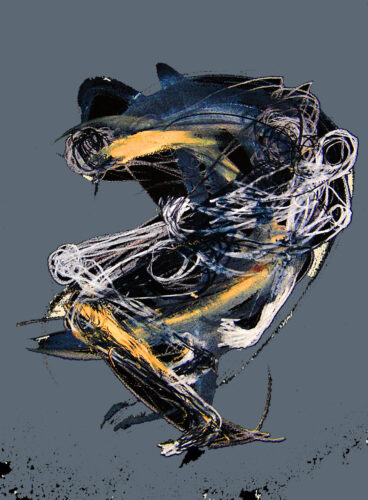 With my deteriorating eyesight caused by a condition called retinoschisis, sound has become an increasingly important part of my visual art practice. I am now conscious that I hear sound in my mind as I make drawing and painting strokes. In this blog I would like you to meet composer Freddie Meyer’s who I have been working in collaboration with since 2017. With Freddie’s incredible contribution my hope always is that anyone who is sight limited or blind will experience the full context of the emotional dramatic work we create.

I have invited Freddie to discuss the motivations behind the work he is creating for Deluge.

Our space in isolation is lonely and empty, separated from one another. One of things I’ve found most striking about being separated is the amount of information that gets lost when we communicate with others outside our lockdown bubble. The subtleties of gesture, tone and emotion can often not be conveyed effectively online and therefore things become less clear.

In the practice that Rachel and I have been developing, this type of information loss is something that we’ve become used to. In a technical sense, our pieces have been studies in the connection between sound and vision. Having said this, the aim of our process is not merely about translation, rather it is to discover new expressions that are hidden in the cracks that appear when you move expression from one medium to another.

American composer, Alvin Lucier uses a process similar to this in his work ‘I am sitting in a room’ where a recording of his voice is played into a space on speakers. It is then recorded once more, a process that not only picks up the sound of his voice, but also the reverberations and resonances of the space itself. This process repeats until the words he speaks are lost. The speech of Lucier’s text is permeated by his prominent stutter and in many ways, this is his aim for the piece. The concluding line of the spoken text reads: “I regard this activity not so much as a demonstration of a physical fact, but more as a way to smooth out any irregularities my speech might have”.  This reinforces my belief that the process of disintegration and decomposition, through our interaction’s technology is not a destructive process but an interesting and constructive one.

With this in mind, Emily (violinist for Deluge) and I spent some time workshopping material for Deluge, focusing on ideas of communication and instability, the game of will it sound or won’t it. We began by playing with unstable timbres, ones that would only have a chance of pitch emerging, changing the way that we listen. Rather than hearing the pitches that Emily produces we are drawn to the other coincidental sounds that are created as Emily plays the violin: the rustle of the hair of the bow against a string, the hushed scratch as she moves her left hand up the fingerboard.

Harmonics are a sound produced by placing the finger at a resonant ‘node’ on the string. As these get higher, the left-hand fingers come closer and closer to the bow — moving up two octaves takes her from being half a foot away from the bow to just a few millimetres. Up here, the slightest movement completely destroys the pitch. Each string also resonates in its own way, and can even vary daily, depending on factors such as humidity. We experimented with a single melody starting on the lowest string, where the harmonics are most rich. As we moved up the strings, this melody became more fragile, with the physical sounds of the violin overpowering that of the music.

Sound Extract 2: a wandering melody in high violin harmonics that passes up the strings until it disappears into air-sounds.

Deluge is about the way in which stories are told, how they are transformed, and about the new stories that unfold when we open up to express. Deluge’s music is about change and about the cracks that form and open up when we explore. By pulling into the uncertain we unveil the grain of ourselves.