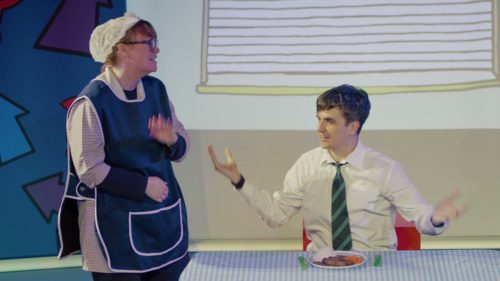 Warren wants to be a DJ

Robin MacDonald is an autistic actor who always puts 100% into every perfomance. He first saw ‘It’s my move’ as a performing arts student at Southgate/Barnet college. He then asked to do work experience with Face Front and when he finished his course was accepted as a supported artist by the company. His talent, commitment, great teamwork skills, hard work and enthusiasm saw him gain a place on the ‘It’s my move’ team playing the part of ‘worried Warren’. `2019 is Robin’s third year performing the role.

How did you start acting?
I joined a drama group at Finchley Youth Theatre that is how I started acting, then I did a performing arts course at college but not straight from school.

What is the best thing about acting?
The best thing is working in a team the worst is being nervous and not understanding my script.

What character did you play?
The character I play is called Warren. He is a bit worried about leaving his friends behind when he leaves school. His Mum wants him to go to day services for five days a week, but he wants to go to college with his friends, do ICT and be a DJ.
After the play, the audience get up and show Warren how to stand up for himself and speak to his Mum about what he wants. They show me how to say what is Warren’s choice 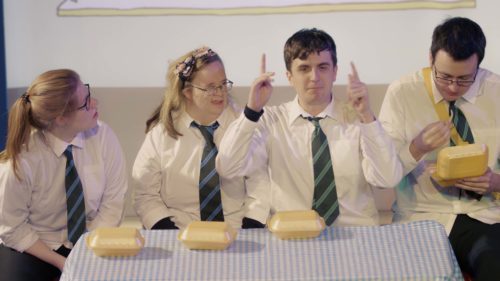 Robin acting Warren in a lunchtime scene with his school friends

What was your favourite venue?
My favourite venue was Oaklodge school because I used to go to school there and I spoke to the audience about how they could be actors like me and some of them wanted to be DJ’s, actors or dancers. I also liked the Dugdale Theatre because that’s where I perform with ‘Broken Silence’ the other Face Front group I am in. I liked doing the theatres because of the lighting and it’s great having wings you can go in and out from – it makes me feel a more important actor when we perform in theatres.

What were the most challenging and best moments on tour?
The hardest moments were getting tired, long journeys, it was hard work bringing the set in and clearing away and doing the workshop after the play.
My best moments on tour were when we did a ‘Shakespeare run’ in rehearsals, when the audience shouted for Warren to ‘do both!’ (Day services and college), helping young people to know what they want to do when they leave school, that I knew all my lines, the sound effect for my DJ scratching, talking to the rest of the actors and having fun! 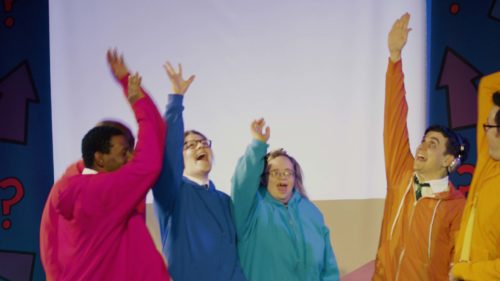 What would you like to do next?
Be in a horror film or be the next Dr.Who! 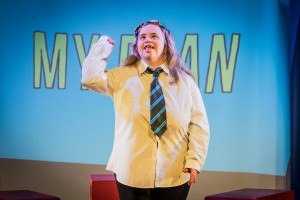 Great to read Robin’s experience with Face Front – best of luck with the tour what is the play called though?

Thanks Colinetto, the play is called ‘It’s my move’