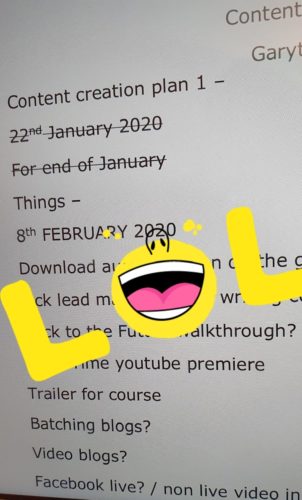 A to do list with ‘lol written over it

It feels weird right? I’ve had that word weird in my head for a while now. That moment between not really scared and not knowing what the hell is going to happen.

NO ONE in this country has ever experienced this before – super weird – and just, well, actually for some of us writers, it’s actually no different. And now I don’t know if THAT’S weird.

Some stuff has been said already on twitter and elsewhere that, actually, this is what disabled peoples’ lives are sometimes like ALL THE TIME. Yet still not many will give two hoots about that, yet again. So what exactly is weird about this, if this is very close to my normal everyday?

I’m being slightly – not sure what the word is here – but I did clearly used to go to events, and visit friends. At least every couple of months or so. Or to my shame, I’d sit in a wetherspoons and order a burger on the app whilst sitting at a table near the bar. I’d always be weary of using my paypal details over their public WiFi though, so I’d need a phone signal to log in.

Last time I went out like that was a Tuesday after work, 25th February. I know that because I was in Wimbledon for a New Wimbledon Theatre Founder Friends monthly meet-up, and a guy from Disney marketing gave a talk. I helped him out with some technical stuff to do with the speakers. Then once we settled down the talk was really interesting, and at the end we all kind of knew that the next meeting would be the AGM in March, and that was that, it was in my calendar.

Obviously since then it’s all been cancelled. Pretty much everything has – super, super weird – and now it’s like, ooooh, what happens now?

My paid job used to be every Tuesday and I’d go to Freewheelers Theatre co, two stations away on the train, and that was my job. Then  every now and again, I’d get a new Arts Council grant or get additional work, usually to do with film-making or writing, when it came in.

So every day except Tuesday I’d be ‘working from home’. No idea why I put that in quote marks because that’s what it is. I have this theory that self employed people have to work much harder than employed people because on top of our day jobs, we have to find additional contacts and future work too. On top of everything else! And I’ve not even mentioned looking after my mum. That takes a couple of days out of the week, so we could go to places, but you know how that is now.

But that’s how it was, which is a long winded way of saying, I was at home a lot. But then every now and again, I’d get weeks where I was out most days. This was inevitably networking or paid work but, I’d be like ‘oh, next weeks going to be hard, am out every day’.

So is it weird that, actually, I don’t feel like my existence has changed much at all? Is that weird? It feels weird, but maybe I’m just comparing myself to others, and I need to stop that right now. Nothing good comes from comparing you to anyone else, so stop it.

I have no idea about any of this. The good thing about that is, neither has anyone else. Hoorah! But that’s just weird too. I feel like, actually if this only lasts till June, and then it can change a little bit, get a bit better, that’s not so bad. But we can’t predict the future. Even the experts don’t know. On a side note, if SARS had reached the UK in 2014, this could have happened much sooner. But it was contained, so it didn’t. It’s the not knowing that bothers me most. It’s the arts council saying no more project grants until we don’t know when.

Other organisations saying maybe we’ll start again in September, we’re not sure yet. There’s the staring at some really hot guy on facebook for like  an hour because I’m ‘working at home’. Ah, that’s one reason for the quote marks. But they can’t go anywhere either. There’s the thinking about additional money and what will happen. There’s the thought of Wandsworth Fringe being cancelled, but I can write a new play for next year. But when will it be shown? Theatre’s not reopening, and I’m not going to Eurovision this year even though I had tickets to the live final. And friends were going too.

Some resemblance of normality is starting to show. Work had our first Tuesday media session via zoom today which worked really well. Now I’m going to have my bath like I did when I used to get home from work. Even though I’ve been home all day.

I find it hard to think beyond this year. Beyond a time when this is all over and everyone is out and about and doing things again. Theatre’s and clubs are open and everyone’s mingling again, it might even be just the end of the summer it all returns to normal. But I find that really hard to see right now.

I concur Gary… life is not all that different for me either… am used to working from home and often having whole weeks of hardly leaving the confines of the flat where I live. The hardest thing is the anxiety and the worry over so many who are in hardship, not knowing how they will make ends meet, or are ill, or who have lost their lives … and the not knowing how long it will go on for.