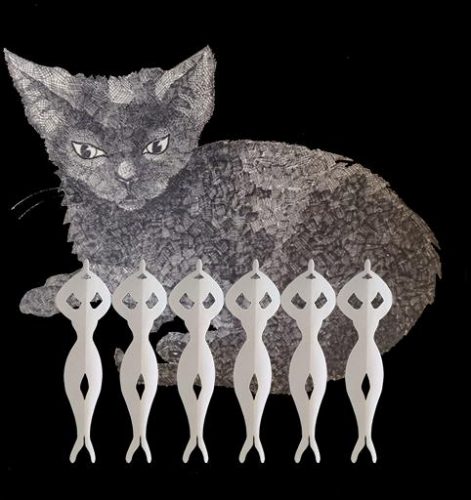 As a frequent traveller, I found it impossible to keep pets. I was touched when a great friend of mine appointed me godmother to her new kitten, Alfie.

Alfie was a house cat and my friend’s house was not accessible, consequently when I wanted to visit my godkit he was brought to the door and handed into my lap.

This worked well while he was small, but although he never became large, he did reach a state where his dignity forced him to protest this handling.

Curiosity about the nature of a caller, would bring Alfie to the door. Nothing would persuade him to bring all four paws over the threshold. Fooled once into placing his two front paws on the chunky stone doorstep, he shook each paw violently in disgust and hastily retreated – shaking a back paw on his way to the kitchen.

From behind my friend’s skirts, Alfie would become bold enough to shout at me, but the one time she attempted to lure him out to join our tea party, he accidentally caught sight of the sky.

Shocked and horrified, Alfie never came near the door again.

In my current state as house human, I’m suddenly relating to Alfie. Forays into my garden have become hasty, furtive affairs, cloaked in tension. What if…people intrude?

My online shopping gets unpacked in the porch after the delivery person has backed two meters away from it to verify my identity, and then beat a hasty retreat.

The packaging remains outside.

Outside is suddenly, potentially lethal – I can still hear Alfie screaming his warnings at me – see the horror in his bright blue eyes.