Sophie Partridge: The Art of Storytelling

From waking to sleeping our lives exist in stories. Graphic designers weave magical lines through our shower gel and breakfast cereal; fact and fantasy clothe us and form our impressions of health and happiness; media selections colour our days louder, bolder and brasher. City planners lay down the scenery, politicians create the score; stories, other people’s stories, swirl around us like snowstorms.

People, ordinary everyday people, need to tell their own stories; need to express their own realities, their own truths and be confident to take their own unique place in the unfolding chaos and order.

Knowing your own stories and having the skills and the confidence to share them, is what the latest LinkUpArts project, Travels, is all about. In a series of Awards for All funded workshops, Travels aims to equip participants with new skills and to awaken fresh curiosities for a variety of ways to create and communicate their own tales.

For our first workshop last May 2017, we were lucky enough to have the wonderful Sophie Partridge sharing The Art of Storytelling. Like an enigmatic pixie-Janus, she welcomed us to the gateways of our own tales; invited and encouraged us to go further, deeper into our creativity, sparking my idea for a series of short stand-alone pieces each inspired by a different workshop.

I’ve always been a little in awe of Sophie – maybe it was that that made the day so special. Or maybe it was simply that Sophie was in fine form. It was a magical day.

I believe in a person’s right to create and recreate themselves. I heard myself say the words out loud and there was power in them. In the moment of utterance I knew that this was another universe. The words, drawn out of me, had opened a door and I was suddenly on the other side. In this new universe resided a clarity and wisdom that dazzled my senses.

I was supernaturally aware of all the times other people had created someone they had claimed was me and I could suddenly see how powerless those images were. Those spin-off identities, amalgamations of fact, fiction and wishful thinking, were no threat to me here. Here I was free to concoct my most meaningful reality, free to choose the balance and weight of the words that would deliver my tale as faithfully as any kind of reality would allow.

My first choice was about admitting or denying my status. It had embarrassed me, so my first instinct had been to hide it. Here in this place, I could watch the spin-off who paraded that same fact with pride; I could register the spin-off who built-up the part with a liberal dose of exaggeration and I could observe the spin-off who got doxed and had withered in shame. Here, it was abundantly clear, there need be no choice. I was all those spin-offs and I was none of them. I could embrace them all without needing to control any one of them. Here I could draw my own lines between realities and might choose to adopt or abandoned them – all and altogether, or fragmented to zero.

Fineness was a quality I was drawn to utter and define in an attempt to communicate without boxing and shrinking the essence of fineness into a token, superficial enough to be mine to bestow. My guide had this quality, to a degree overwhelming in any universe but this one. My guide, this story-telling pixie workshop leader, together with my fellow travellers, pulled qualities from life and spun cotton candy into the details of our journey. We practiced spinning alternate realities. We made and unmade ourselves, threading ourselves through and around each other, always with an eye to our guide, always aware of the fineness we and our realities were being nourished in.

In this universe there was no need to define solitude. Here I could embark on a solo journey without going alone. Here my journey was no longer a singularity. We ate, but food was secondary. Our laughter offered a rarer nourishment. And the fineness blew my mind. For that day, my reality was visible fathoms deep under sparkling ice, backlit by the purity of snow and haunted by the Tanuki. The indivisible stuff of legend and reality.

There are universes where tanuki exist only as caricatures in broken plastic containers of dead plants in dry and dusty alleyways. I am there too, I create them for luck. On other universes small-hours Tanuki are fed sausages by wildlife enthusiasts with night vision cameras and awed breath. I am there too, absorbing this shift in reality, open to the idea of cute.

Other, easy to reach, but harder to access universes are home to sinister, predatory tanuki who defy extremes of ugliness to encroach upon human hearts and minds, tampering with truth and realities. Am I here too? I shy away, but how do I know? And why do I know? And why would I back away?

Backing into now, I bump into my pixie guide. I back into the presence of my fellow travellers, each returned and paradoxically still here, waiting. And the now has acquired value from our absence, a rarity that impresses upon me. Is it possible that the pixie fineness is somehow catching? Can we take it, share it and keep it?
I collide with calmness and a sense of purpose, strong and secondary to the paradox of fineness. I bump into me, the me who has followed and learned something poignantly local and immediate and relative; relative to me, relative to cotton-candy, spun threads and these totally intangible sensations of fineness.

On a grey and English flavoured day,
suspended between past and future. Echo of
my own suspension between east and west (between
my grandson’s pre-birthday flight to Okinawa
and the anniversary of Bedstemor’s birth),
this was an unanticipated adventure
of a workshop. When, once upon a time
a child was born under northern lights, nobody
was looking into the future of her grandchild’s
grandchild, no one anticipated the leap from
Nordic ice across Europe into the East.
The little Danish girl, so much an afterthought
her older sibling inherited her, emerged
on what would become the most significant date:
Liberation day. And on this same date
her daughter would meet the man and the beginning
of the cross-generational journey that pauses
here, in the fineness of this workshop, before
acknowledging its genetic diversity
in eastern universes, where the tanuki
promise luck to my sceptical son and his son;
to the mother who made her own way from China.
Luck for the flight, from home in Tokyo to the sun
early warmth and cooling seas of Okinawa;
luck for my three-year-old half,
soon to be four. Luck under grey sky,
where tales have the clarity of pixie dust
and tanuki travel from legend
to reality – the wild raccoon-dog
spinning multiplicity through
the art of story telling.

you’ve reinforced my need to work more on the introductions. I remain partial to your work. Thank you. 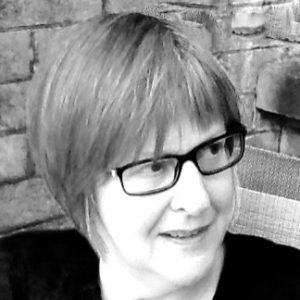 I’m a freelance writer, mentor, tutor, dramaturg, and scriptreader. I run Playwriting Salisbury+ which supports writers throughout the South West. As a mature student, I gained an MA in Scriptwriting, and a degree in English. I have 25 years’ experience working with writers, taught on the Open University Scriptwriting module, and with Community Groups including ... 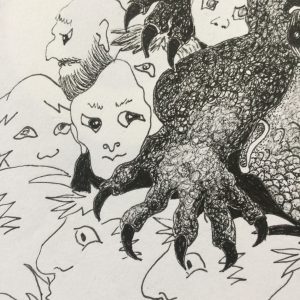 Last in the Travels series: Performance with Tam Gilbert

Cascading down through the gears just as fast as I could, I braked, eased the car off the track and swung open the door; hanging my head out into the breeze, I waited for my guts to erupt. I certainly didn't want to mess up the interior of the Ferrari. I got exactly that same gut ... 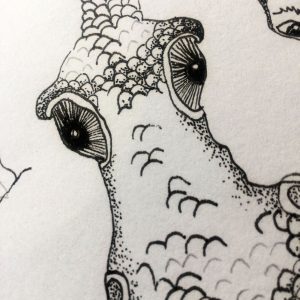 Pitch Yourself: on the pleasures and pitfalls of publishing with Penny Pepper

On 1 July LinkUpArts brought Penny Pepper to Salisbury Arts Centre to lead us through a workshop. The sun shone and there was a buzz of anticipation in the room. Today was not just another creative explosion, today was getting down to the nitty-gritty of publishing. A screen covered the back wall, a technician tweaked ...