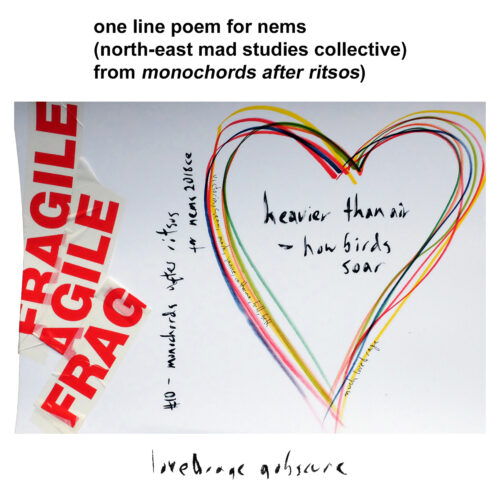 it is valentine’s day, are you with massacre or the mascara?  johnson, the prime minister of drowning street product of a broken home fantasises godfather that bloodbath ending.  as for michael gove, he’s on the record as saying al capone is his kind of guy.  find the smartest man in the room, embrace him close and slam his head into the wall. again, again, again.  and then there’s tony, patron saint of tough love popping up to rewrite the covid rules. what’s that about? tough love social workers, tough love psychiatrists, pip assessors – tough.

we’re slowly touring the show, provoked to madness by the brutality of wealth. this and we’re making air quotes here support worker said to us, ‘what do you need books for, you’re homeless?’ shows our revenge, 13 years of reading, graduating from the open university in 2016.  we read maslow’s hierarchy of needs.  that approach doesn’t work for us. having the bare minimum is never enough.  we all need more than that supposed extra. what’s the thing that gives you meaning?  that moves you on from just being a head just above water? is it a book, pen and pencil, paper?  used to break out of one psychiatric hospital to steal headphones for someone who needed them to still the voices.  food psychology shows if you only have ‘enough’ more air quotes, everything becomes firefighting. you can’t move on.

someone who experienced a lot of oppression said lapsang souchong, we said what’s that they took us for a cuppa. soldiers had laid down in the tea leaves that were drying. farmers were furious cos the crop was ruined. they smoked them found they could earn more money that way. we listened to this person who’s experienced so much oppression and we’ve learned and we’ve grown. they have little. yet they’ve shown us more than any social worker, psychiatrist or st. tony. a county durham child’s the only one who’s ever taken the time to give us a visual art class. they taught us to draw. under covid, museum of homelessness with others set up a task force. they fed folks, performed street solidarity and received backlash. why were, even more air quotes, ‘treats’ being given instead of the basic minimum. yet adding that additional ingredient creates a psychology of plenty.  it allows breathing space, dreaming and healing become possible.

andrew vachss, who’s been reframing narratives forever, says it’s not about surviving but transcending.  he took aid into biafra in the 60s.  person next to him, got their brains blown out. he didn’t. thus he survived.  he said survivings just dumb luck. the trick is to transcend.  the existing narrative. the tough love one is very good at allowing us sticking plasters at most a brief gulp of air our head above water before we’re plunged on down.  and elif shafak talks of wounded democracies.  and more and more are joining the club. what unites some of the wisest writers we’ve listened to from audre lorde to laurie anderson, to elif shafak to andrew vachss and the trauma therapists and the non-academic academics who demonstrate change really is possible. and the economists like kate raworth on sustainable and equal economics. it’s reframing the narrative. that’s how we turn things round.

it’s wonderful being the love-technician for the newbridge project up here in the north-east, for the second year running, golden envelopes and virtual love and more and we’ve had so many messages of thanks.  year one commissioned lovebite biscuits, art and artfulness. storytellings with fridakahloctupus she may be crocheted but like all the cephalopods, this octopus has three hearts – that’s evolution. there were prints on sanitary pads and collecting for period poverty, storytelling with cups of barry’s tea. this year, we quote the newbridge website, ‘gobscure and their diverse crew have been filling golden envelopes with recipes for love and posting them out across the country. they’ve started dropping into doormats and offering love for all in the widest sense. recipes for love follows on from 2020’s love hearts for all, sharing the love as far as possible.’ this year, year two, all the letters and artworks are available to download. we wrote ‘we realise it feels there’s little love going around right now. but we’re on the case. valentine’s postcards, letters to a younger self, a recipe for sri lankan love cake and also a workshop zine.  wishing all a more loving year ahead. year of the ox has just begun so be strong. please help yourself to this love.  go to thenewbridgeproject.com under events look for recipes for love and help yourself. pass it on and share. for now, a short story we wrote a lesson on love learnt at our council flat back yard once the violence at the gate stopped. it’s for thi wurd, glasgow based publisher, they held a magnetic field 69 love songs night, pick one of the songs and write something short in response. love and rage to yous all.

for thi wurd magnetic fields night (from papa was a rodeo) : burn

love was a truckers hand.  warp n weft ov fairy-light pilots us off the transpennine grey n into the truckers hand where skin-on-skins-electric

before i learned to stand.  edge-yu-cayshun : others bullied for no reading, were screamed at for taking the kiss ov book after book after book.  rationed to one skinny text per term after

mama was a rock ‘n’ roll band.  our sleeping bags nicked driving to that demo.  they get it back, bonus is oil stains off their hands.  dancing to age of chance they climax on dont get mad get even.   put match to fire we’ve built, whisper they’re ruby ax

i love yr questioning eyebrows.  eyebrows get plucked into literal question-mark in the de-gendered bogs.  ruby ax hears library-rumble, bursts out offering to truckers-hand each n every.  they really do truck, mostly they tuck, yu definitely don’t wanna fuck … with

55 years later.  blood n bone makes the best fertiliser.  our roses have the fattest thorns.  stand at back-gate, close eyes n … breathe deep.  this perfume-ripping-flesh is our mirror-ball.  age 55 n we’re finally safe to turn our back on world.