rant nine for elif shafak, and her strategy, the bisexual pen.

its rainbow month. the year before the pandemonium set in the local supermarket, here on tyneside had pride month in its window. i think this is the most notorious homophobic supermarket. 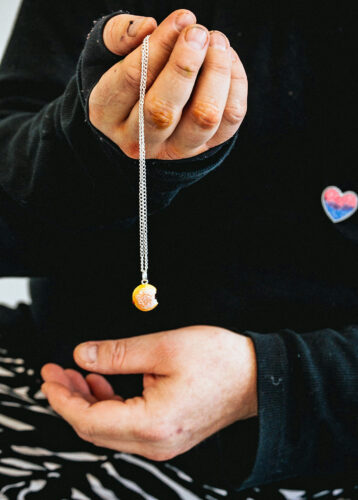 having our cake and eating it. Photograph: picturesbybish

thus, if it’s homophobic, it’s biphobic and transphobic. but it had pride month stretched across the window. didn’t mention any of the actual words just pride month. we thought maybe they’re celebrating sliced white bread. we like language reclamation, but the word queer on its own. it’s very straight friendly, isn’t it?

queer. doesn’t take up much space. pride doesn’t take up much space. i reckon we should enforce the adam boulton test. adam boulton some extremist, homophobe and newsreader. so bad owen jones had to walk out of one of his broadcasts because after a massacre in the states in florida a few years ago, that newsreader that extremist that homophobe and thus biphobe and transphobe, refused to use any of the words you know, lesbian, gay, bisexual, transgender, queer, pansexual, intersex, asexual, non-binary, plus. they just talked about that massacre as people, owen jones rightly walked out. we reckon there should be the adam boulton test. every time the rainbow tribe, us, we’re talked about everyone everywhere should use all the words and use them without pulling funny faces smirking, coughing, or let’s hear everyone say lesbian, gay, bisexual, transgender, queer, intersex, asexual, pansexual non-binary plus. let’s take up space.

back in the early 2000s we were in a homeless hostel after a sectioning and libraries still existed. and there was a large bunch of people and we wanted to avoid them so we we curved, we didn’t go straight we curved that was through world cinema dvds. we saw the title the colour of pomegranates, and we picked up the dvd we we’re intrigued. we looked at the pictures they just blew us away. turned out this was a filmmaker from geographic transcaucasia sergei parajanov fat, mad, bisexual, big kid, lifelong dissident, imprisoned for his sexuality, but even then the soviets couldn’t label him right. he was bisexual. they labelled him as committing homosexual crimes. he was a big kid, his art glorious, amazing, incredible, uncategorizable. he thought one way, no matter how repressive that regime was, no matter how much they locked him up, denied him his freedom denied him his artistic freedom too when he’s outside. he was irrepressible. he was a big kid. he jumped in the street, his art, he just could not conform.

yes, way more repressive regime than here. but we are one of those many people who just the system here it makes no sense. we can’t conform if we tried. and we fell in love with him. he’d died a while before he was just this larger than life amazing, lifelong, dissenting artist. and we’ve spent ever since working on this body of art around and about him and us and dissent and protest and channelling fat mad, big kid bisexual dissidency. we were given free space a year or so ago, it was amazing. finally, people in the arts starting to listen was wonderful. first thing we did we banned them even considering this for rainbow month or mental week or homeless day. every day should be rainbow and mad. and marking those of us have a roofs over our head and those of us who don’t

and right now, folks look at this art and they say, oh, it’s not queer. it’s too much. it’s fat, and it’s mad and it’s big kid and it’s bisexual and it’s dissident. that’s too much. they can’t cope. they want a nice easy box. we’ll be getting to elif shafak, and her strategy the bisexual pen. in a little while. we have an album of bisexual sound art ink any body, celebrating sergei parajanov. celebrating elif shafak. also celebrating lou reed in a track record called loud reed and more. it’s on bandcamp. we’re performing rose carved in rain for newcastle fringe live in person and also live streamed this 28th of july. please see it.

we are working thanks to futures venture radical art fund, with edinburgh printmakers part in person and part on line with prints and performance and participation on writing liberté with the lips. it’s all spiralling out of celebrating sergei parajanov and fat, mad, big kid bisexual dissidents.

there’s an old word multipolar instead of bipolar. this is nothing to do with the more recent use of it in mental distress terms. this is a geopolitical term. cultural christianity in this country has created a binary. other stories, myths, legends for example, the norse myths are multipolar their gods and goddesses multiple could change gender, change species, played tricks, drunk, fought, fucked, laughed, loved, wrote poetry, and eventually killed themselves out. they were licked out of a glacier by a giant cow. sounds more intelligent to us. point is they were born and they die. they were very human. and they were multi polar, multiple possibilities, multiple truths, multiple perspectives, rather than a bipolar and remember that’s a term used politically going decades and decades and decades back left/right capitalist/communist, woman/man, et cetera. cultural christianity is binary, multipolar or using elif shafak’s, wonderful term the bisexual pen it’s both and makes way more sense.

something to point out from both within and without biphobia is everywhere. the wee illustration that we’re using for this rant, is also part of the show, we have a small piece of jewellery, no one’s ever bought us jewellery, we bought ourselves some thanks to curious arts and queer arts north bursary, it’s a wee doughnut we like to have our cake and eat it and wear it. and of course, having your cake and eating it, is a biphobic slur, just a small one. it’s a little teeny, weeny one. biphobia is everywhere, within the queer, the rainbow, the lgbtqia tribe, as well as without, bi erasure. the erasure of bisexual identities is a part of that. please remember, those of us who are bi are significantly, statistically poorer and more mentally distressed, ie disabled, ie mad, than lesbian and gay folks. yes, trans folks are even worse off.

we experienced biphobia, just as we experienced disablism continually and constantly the other week in a supposedly safe space, the rainbow space, someone refusing to accept that the b is part of lgbtqi+. we’ve not heard biphobia called out other than by other bis. and one or two radical folks we’ve not seen bisexual, included in safer spaces or braver space policies. unless we’ve fought to place it there. it’s knackering. it’s bruising, and part of the reason why our mental distresses and our disabilities are so poor. remember this, biphobia is everywhere within and without. the b we are the largest single portion of the lesbian, gay, bisexual, transgender, queer, intersex, asexual, pansexual, non-binary plus group. we have protected characteristics, same as those of us with disabilities. yet we’re rarely protected.

so please remember this next time, you don’t call out biphobia, when you’re quite rightly calling out to transphobia and homophobia. think of those two lasses that took that beating on the top deck of that london bus a couple of summers back. if you’re not actively calling out biphobia, alongside transphobia and homophobia. you’re actually saying one of those lasses deserved the beating. you are no ally. be an ally. yeah. elif shafak said, “stories cannot demolish frontiers, but they can punch holes in our mental walls. and through those holes, we can get a glimpse of the other. and sometimes even like what we see.” when you’re looking at us, bisexuals elif shafak, sergei parajanov included, start liking or even loving and hopefully laughing along with what you see. love and rage.