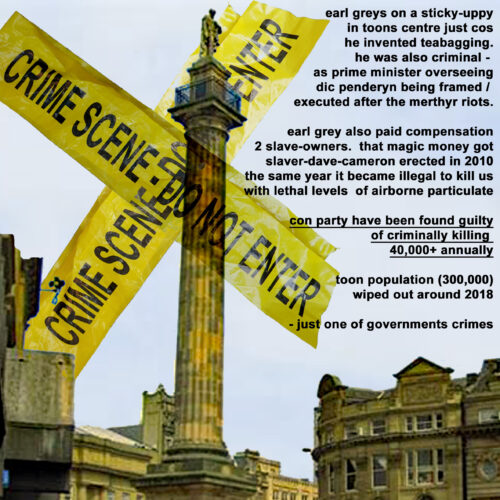 this text is adapted from what we wrote for the zine thats part of our show called provoked 2 madness by the brutality of wealth. in the show everyone gets a free copy of the zine and a piece of crimescenetape sending back their creative resistances to a collective map.

i know where everyone else is buried
i’m the last, i am. i had words and they didn’t

final lines of a poetry-set from way back about our worst sectioning. after, a ‘support worker’ said ‘what dya need books for yr homeless.’ were all born with voice, mostly it gets stolen / silenced / denied. at most were permitted to speak on certain ‘things’ in small ways. our first battle is regaining voice.

Andrew Vachss says ‘anybody who has served in combat in any way understands that words are weapons. And I’m in a war. The war hasn’t stopped.’

war was declared against us long ago. in any war some folks make a killing. this shows partly about that. our revenge on that ‘support worker’ was thirteen years of reading including Engels condition of the working class in england – the line ‘provoked to madness by the brutality of wealth’ really st(r)uck. been saying for so long different battle same war. sometimes battlefields join.

don’t think of an elephant. now yr thinking of elephants. its title of a book by George Lakoff which energised Bernie Sanders 2016 c.e. (common era) campaign. whoever frames an argument wins it. we know who’s framed ‘the’ argument, ‘the’ narrative. pushing-back against a dominant story means were only ever firefighting. to stop losing we need to reframe … stick to our values, but argue our way so were heard. lets reframe housing for example. britain signed the universal declaration of human rights just after world war two. article 25 says we all have the right to a standard of living adequate for our health and well-being and this includes food, clothing, housing, medical care and social security. telling the truth that housing is a human right not a brutality of wealth allows us to reframe the argument.

blogging as rational-insurgent Erica Chenoweth sets out the 3.5% rule. 3.5% of populations have tipped the whole over to a safer, less violent future. in britain that’s the population of wales, where we tour next spring.
Laurie Anderson replied to a question asking how can we begin again? with ‘i think that the resistance will be in the language, and i think that it will be artists that do it.’
Elif Shafak reminds that ‘stories cannot demolish frontiers, but they can punch holes in our mental walls. and through those holes, we can get a glimpse of the other, and sometimes even like what we see.’

part of reclaiming narratives needs to be telling good news from zapatistas to rojava. this show reminds britains not a ‘small island’. zakynthos isa small island. during world war two the small greek island of zakynthos hid all 275 jewish people safely from the nazis and no-one died

thanks cardboard citizens for introducing us to Augusto Boal’s theatre of the oppressed. we all need liberating from the ‘cop in the head’. and we love ‘spect-actors’ – regaining voice, trying different solutions, allowing yourself possibilities. alongside this zine, this show (safely) offers crime-scene tape encourages you to post your own creative resistance and give them a collective home. having a voice is needed more than ever. thank you Museum of Homelessness for hearing us and many others via catalyst – just one strand of your essential work.

heres to rewriting whichever part of narrative you wish to (ta Audre Lorde 4 reminding there are no hierarchies of oppression). 2020 c.e. (common era) is Engels 200th anniversary – history doesn’t record what cake he liked but he’s into us all baking, having and eating our collective cake

our best friend Marty was killed under austerity. she once said the most important lesson life taught was her dads words before world war two : never eat with yr mouth half full. fill it first and then speak for maximum effect

camden peoples theatre gave us a bursary (our first!) to perform with our mouth full a few years ago, the first version of this show