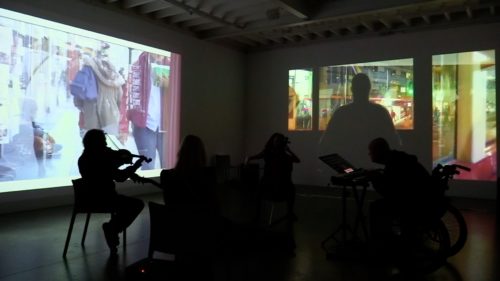 The installation/performance of ‘Surroundings‘ at the South London Gallery on the 24th of April this year was well received, judging from the follow up discussion and comments in the audience questionnaires. And as ‘Surroundings’ is an R&D project, feedback is an essential process for informing and further developing my experience in creating a more fully immersive artwork. The next stage is to work with artist Sue Austin to create a more ambitious 360°installation/performance. This will take place at the Plough Art Centre, situated in Great Torrington in North Devon on the 26thof June 2019.

Creating the installation/performance at the South London Gallery was a totally new discovery for me. I did not and could not have realised its full potential until being immersed in it myself. And being one of the 4 musicians (including Dee Fry, Jo-anne Cox and Zack de Santos), this experience created yet another dimension, as the voices I had recorded came to life. There was something magical about sharing in a live improvisation to powerful stories and observations, to the point where all my internal dialogue switched itself off, as I was overcome by the voices of others.

From the process of making the first half of my project, I have learnt how to improve focus in my line of interviewing. This has enabled me to find more links between participants in both emotional tone and subject matter. And I have now completed all my interviews in Bavaria Germany and North Devon. Recordings of people in Bavaria are primarily with older people, while in North Devon, I have found younger people, particularly those who are disabled, or who have a learning difficulty.

Compared to interviewing people in Southwark, those from Bavaria and North Devon are much less ethnically diverse. Although in Bavaria there are participants who settled from Austria and North America but all European in origin. And there people who have migrated from other parts Germany to live Bavaria, particularly families who were divided by the East and West divisions after the Second World War. Participants’ family histories often haunted by pre, during and post WW2 memories.

Many family recollections contain shadows inherited from the Nazi regime and the Russian invasion. In North Devon, the disabled people have shared experiences, of isolation and segregation, particularly from their families, or within schools and college. These accounts have struck a particular chord, now that I have both hidden and visible impairments. And not being able to drive, traveling across North Devon proved particularly awkward and lengthy, much more so than I am used to in Hitchin and London.

From both Bavaria and North Devon, I have been deeply moved by the participants’ willingness to share so many painful, funny and joyful memories, recollections and thoughtful observations of their surroundings. And I have almost completed the editing of the voice soundtrack, which has taken quite some time, as it is so hard to know what to use in representing something of what each participant has imparted to me.

My next major task is to create and edit videos and photographs into a montage of imagery that is pertinent to my experiences of the visual surroundings of each location within North Devon and Bavaria.

Thank you Richard, that’s very kind of you. I will be in touch.