My final ‘Surroundings’ installation/performance was installed on artist Susan Austin’s amazing 360°rig. It is a sculptural structure that provides a perfect platform for my 360°image projection, space for us musicians to perform in and accommodate the audience. A space the audience can walk into and around a good proportion of it’s outside circumference. This structure was set up at the Plough Art Centre, Torrington in North Devon. 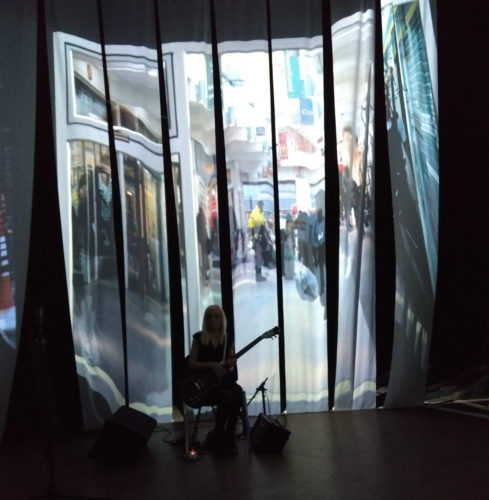 There were 4 scratch performances with musicians Dee Fry (guitar), Jo-Anne Cox (Cello), Zack De Santos (viola) and myself (keyboards & iPad). We did not have long to prepare for playing our instruments to the voice soundtrack and all the musicians performed admirably, providing a highly evocative background improvisation to accompany the voices, reflecting the nuances in what people were expressing in their powerful accounts of their lives and experiences, in relation to their surroundings.

The attending audiences were made aware that this was an R&D project and were asked to fill out a questionnaire, although no one was made to feel obliged to do so. Having briefly read through, as much as I can, the response are positive, which is highly encouraging. Therefore the outcome was far better than I could have hoped for, although from the onset, as an experiment I was not at all sure of the success of the outcome, having never worked with 360°technologies before. There were many desperate hours/days/weeks spent on editing the participant’s voice soundtrack together with my imagery, to fit into the appropriate 360° format.

I am currently working on stage 3 of my ‘Surroundings’ project; trying to work out how to upload and publish the original 360°artwork, as well as the 360°video clips of Plough Art Centre installation/performance, recorded by Sue Austin. Therefore devising and delivering this project has given me many sleepless nights, negotiating the extreme creative learning curve that I have given myself. But then, that was the intention, to push myself into uncharted creative territory. And it will take me some time to get the final product/s up online for 360°viewing, hopefully in the next few weeks. I will let you know how it has all transpired in my final ‘Surroundings’ R&D blog.

That looks like a very impressive installation, must taken a fair amount time to come up with the idea.

Surroundings – making connections on the theme of ‘home’

Ivan Riches is a disabled visual/ sonic artist, filmmaker, musician/ composer and writer. He talks to DAO about his final conclusions from the research and development project Surroundings after nine months of work. I began developing ‘Surroundings’ following personal impairment related issues that changed my relationship to my immediate environment. I wondered what it was like ... 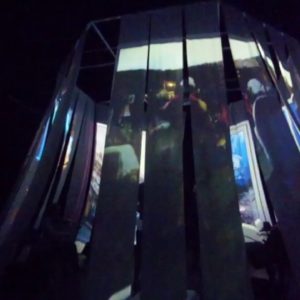 After considerable time recovering from all my hard work creating a 360° online artwork and 2 insulations/live performances, I am trying to complete the final part of my R&D ‘Surroundings’ project. And this is where you dear blog readers, enter centre stage. To further the progress of my 'Surroundings' project, I will need your responses to questions concerning the ... 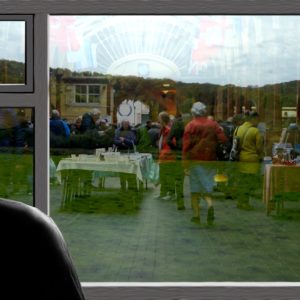 My Facebook live interview wasn’t easy to keep going for 2 hours, particularly when answering online questions and responding to passing comments. But somehow it seemed to be successful, after trying to work out which way up to hold my iPad. A comic and rather embarrassing start to what turned out to be an enlightening ...