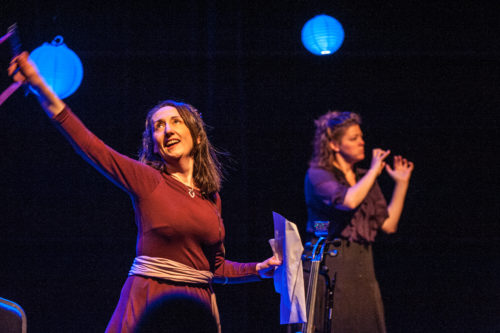 Last April  I performed the first scratch of my show Defiant Journey at Stratford Circus Arts Centre. Supporting me with blogging, project partners DAO ask what I learnt and how did it meet my expectations? I have decided to answer this over several posts. In order to give  quality feedback, from myself and audiences reached.

The aim of Engage and Interact was to create an inclusive electric cello performance involving audience participation with digital and sensory arts. The compositions were to be selected from pre-existing material. The creative contribution of the audience was to form an essential part of the final outcome.

The grant application was written slowly against a backdrop of crap! To be specific, an utterly draining and prolonged PIP review and a friend bringing bed bugs to my flat … twice!  During this time I was lucky to be supported by a therapist, who works outside limitations of institutionalised recovery. Every time I went to therapy I held and spoke to ‘dragon’, a fierce and protective friend selected from shelves of enticing figurines.

As the funding application, bed bugs and PIP, dragged on, the power of ‘dragon’ from therapy became embodied in the powerful sound of my Bridge Dragon Electric Cello. Bed bugs sought me out in the night time and caused havoc in my flat. In my mind the bedbugs became profiteering disability assessors  and the recovery model robots who leave us superficially ‘cured’. By the time I got the funding everything was different. New compositions emerged from the year of crap. Setting out to link the compositions together Defiant Journey was born. A story bursting to be told with Dragon Cello at the centre.

Audio to light technology designed by creative technologist Charles Matthews and supported by Help Musicians UK, has helped me provide new ways to access, engage with and co-create with live electric cello. It is also an excellent way to convey the emotional intensity and exquisite sensitivity at the heart of BPD/EUPD.

Vibrotactile sound (designed by VibraFusionLab, and made by Together! 2012 artists)  has surpassed my expectations in offering ways in for Deaf and Neurodivergent audience and has become a key feature of the show and workshops.

The use of iPads (kindly lent by Drake Music) in the show offered audiences ways to contribute and interact musically. An unexpected outcome was the bedbug app designed by Charles Matthews. This took the use of music technology, beyond “music” and into immersive story-telling.

Artistic BSL interpretation of my cello music by Laura Goulden offered access for Deaf audience and gave the show an extra dimension.

The introduction of story led to my first attempt at first person audio description.

Audience interaction and engagement at the story-based show led to freer more intimate Together! 2012 workshops.

Many thanks for reading!

Two backdrops in one. Well done.