I’m Katerina (Kitty) Holmes. I’m a young disabled writer and artist. I’ve worked with Unspoken and independently with my own company Ignite Arts. This article is about a film that was commissioned by BBC New Creatives in 2019 and made together with Resource Productions, called ‘Speak To Me Listen To Me’.

People are often too scared or embarrassed to talk to disabled people or they don’t see us as people. This means we can’t get what we need. The social model of disability says that people are not disabled by their condition but by barriers in society that mean they can’t access things in the same way as everyone else. The barriers are caused by things and places not being accessible and by people’s attitudes to disability.

I hope my work will help people understand that disabled people have a voice and should be listened to when they say what they need and that we are not here to be feared or pitied. 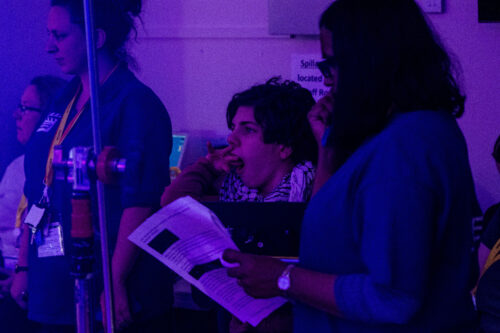 What gave you the idea for this film?
People who you meet. They get shocked by my disability. They are usually kind but they don’t know how to deal with me. Often they ask whoever I’m with ‘How can I help?’. The answer is always ‘Speak to me’!

The original idea was to show different disabled people facing different barriers because they aren’t being listened to and the barriers being taken away when someone just did that simple thing.

I want people to understand that disability is not just an issue for disabled people. It’s for everybody to think about the things they do and say and how they impact on other people.

How did it all come about?
I did the BFI Film Academy at Pinewood, which is run by Resource Productions. Resource are amazing. I learnt a lot on the course and at the end they told us about the BBC New Creatives scheme and I was interested straight away.

I went to some workshops with Resource and Screen South, who are running New Creatives in the South East, and started working on my idea. My proposal was finally accepted by the BBC in July 2019 and I started work on the film, with Resource as my production partner.

Did you get support with your application?
Yes I did. The guys at Resource were very encouraging and supported me at all the workshops and development days. The Screen South development days were very useful. Jo Nolan and the others asked me lots of questions and really made me think about how to get my message across. We heard from people in the industry and learned about how to use images and sounds to tell a story. I got some really good ideas on these days. I really enjoyed talking to Jes Benstock and watching his film The Box.

How did you develop your creative vision?
I started off with four different stories but I wanted to find a way to join them together into one. It’s really Jay’s story now and it tells you about how he learns not to judge people by what they look like.

The music is important because people sometimes judge this kind of music too. It seems out of control and threatening but when you listen you find it has something to say. That’s what happens with Jay and the two women he meets in the film.

How was the film made?
When the script was approved by the BBC we could get started. Resource looked after the production side and helped put the team together. They did everything they could to make it accessible for me and the cast. We shot it in 2 days at Treloars college. Dom and Abhi were on site the whole time making sure I was able to control things. The first day was the night shoot and it got very late and very cold and wet. Poor Imogen was really suffering by the end!

It takes a massive crew to make a film, even a short one, and it was great to see everybody working together. People in film are just really committed to getting it right. 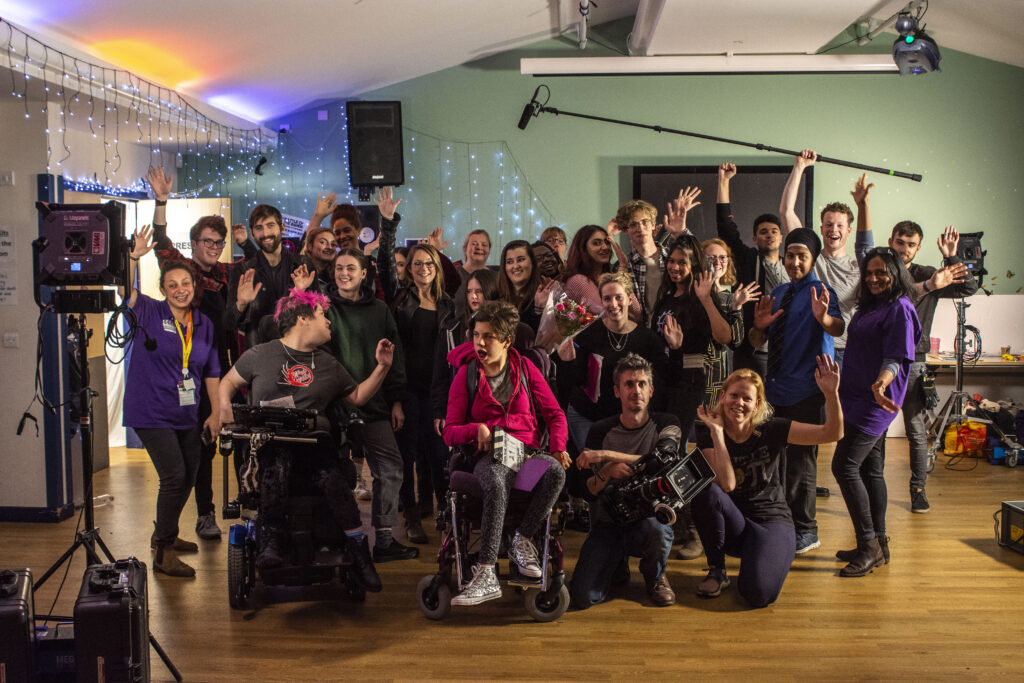 The crew after the shoot

We did the editing by email. Euan sent me his edits and I gave him feedback. It took a few goes before we had it right. It was great to finally see the film with music and sound in the post production studio. The crew there and Steve from Screen South did a great job and I’m really happy with the final product.

What other projects are you working on?
I’m working on a documentary project. I’ve been doing interviews online with my friends and contacts about how you become independent of your parents. This is a big thing for all of us but even more if you have care needs. It’s really just talking about what people want and need and how they can get it.
When we’ve finished we’ll have different interviewers talking to different people of all ages and in all situations. It will be like a conversation and I hope it will show us all something about ourselves and also help people understand what it means to be disabled.

Hopefully when we can get out and about again we will go and film people in their homes and communities. If you want to learn more about this project or anything else you can contact me on social media or by email to katerina@ignite-arts.co.uk.

This is a brilliant and important film with hard hitting messages for society, and society means all of us. Very many congratulations Kitty on a great piece of work.

Great effort, Kitty! Where can I see the finished film? Just like Maartje I find it difficult to make contact with you when I meet you (very rarely). Maybe this film will teach me how accomplish that in the future. Keep it up and lots of success with your film,

Well done Kitty, an excellent Q and A.
I am looking forward to seeing the fruition of your projects.

Really enjoyed reading this article about the film you have made. It is a great achievement and we are so pleased for you and proud of you. Paulene

Really great work Kitty. The idea for the next project too is so important, look field to viewing it, a brilliant piece of work.