A few years ago, I would never have dreamt of performing my work in public let alone flying out to Berlin to lecture German students about what it’s like being a British-Asian disabled woman writer.

Last year I received an email from Dr. Katrin Röder, a professor at the Humboldt-Universität zu Berlin, requesting a copy of my self-published pamphlet “Rag Doll” which was out of print. I directed her to my new pamphlet “Patchwork” and my novel. Katrin was searching for disabled British women writers.

She was very impressed by my work and asked me if I would like to come to Berlin to do a reading of my work to her students. I could not believe it. I was flabbergasted and I asked my publisher if this could be possible. Simon Fletcher was amazed too and said I should take the opportunity. The trip was planned for June 2018 but due to some complications, it was postponed to November 2018. My husband was busy and he suggested I go with my publisher who knew my work and could support me in the lecture. I’ve never lectured at a university before let alone flying out to a different country! Simon was thrilled when I asked him to escort me to Berlin. He used to live in Berlin in his early twenties when the Berlin Wall was still up. And for him, it would be a good trip to see how the city had changed. I also lived in Germany in Frankfurt in my late teens-early twenties, between 1989-1992. It was the time when the Berlin Wall came down, which I was not aware of then. My parents had sent me to Germany in an arranged marriage agreement. Although I felt I wasn’t ready for marriage at 18 years of age, I still had to go to Frankfurt several times to get all the paperwork sorted.

The Germans were terrible in addressing disability. They didn’t believe that a disabled girl like me could marry someone able-bodied or marry at all. I don’t think they had ever seen a girl with cerebral palsy before because the German immigration officer demanded that I have a privately paid ‘brain scan’ before any marriage proceedings could go ahead! I had to comply with this unnecessary and expensive requirement. And the results were surprisingly normal.

The German officials were still not entirely satisfied even when I showed them proof from the English government. I was not happy with their prejudiced treatment towards me. In the end, all marriage plans fell to pieces and I returned to England as a single young lady, which at the time was frustrating for my parents but pleasing for me!

So, Germany was a weirdly exciting experience for me, as going back to a country that clearly did not respect disability, and I wanted to know had things changed at all? On 19th November, I flew out to Berlin and delivered my lecture on the following day. Dr. Katrin Röder was such a lovely host. She escorted us around Berlin and the Humboldt-Universität building. The lecture was very informal and the students and professors were amazed by our presentation. Simon Fletcher and I talked about – ‘Finding a Voice: Writing with Disability and Across Cultures’. Kuli and Simon with German students and professors

I wore half Indian, half British clothes to the lecture (Punjabi kameez with rose gold jeans) to mark my identity. I managed to talk for just under 2 hours with the help from Simon with a question and answer session at the end. They all were very impressed with my writing and all my achievements in my life, despite being underestimated and disadvantaged for most of my life. I thoroughly enjoyed the whole experience.

The answer to my question, has Germany changed its perspectives on disabled people? I think there’s a long way to go in comparison with British culture and acceptance. As Simon and I walked the streets of Berlin we saw a number of ignorant people who backed away from us as we approached them, however, some people were very helpful and kind: a very mixed bunch indeed. I would like to thank Katrin for giving me this amazing opportunity and Simon for supporting me.

Here is a villanelle I read at the lecture:

Entered the world like an uninvited guest;
I hid away, embarrassed- I was a disgrace.
Flawed, I survived this sentence. A tough test.

A child who was compared with all the rest,
I was different- an alien from outer space;
entered the world like an uninvited guest.

Benefits, wages kept me together, dressed,
I was a cash point- abused without a case;
flawed, I survived this sentence- a tough test.

On display to men for marriage; suppressed,
I was a British visa for Asian men to chase;
entered the world like an uninvited guest.

A lucky escape, rescued by a husband; blessed
with a family that I could love and embrace.
Flawed, I survived this sentence, a tough test.

My dreams came true and all were impressed,
a valued writer, poet, working mum, a place.
Entered the world like an uninvited guest,
flawed, I survive this sentence- a tough test. Beautifully written Kuli you have an amazing talent!! May you go from strength to strength as an advocate for Asian Punjabi women who have a disability. Feel privileged to be part of the Punjabi Women Writing Group with you.

Very well done! You are a wonderful and inspiring example to us all! A great success. ☺

Wonderful Kuli
You are an inspiration to us all
Well done

What an accomplishment Deepi, proud of you. I remember going to Germany with you! Very well done and I hope one day you shine internationally xx

I remember that! What a journey! Thanks.

Fabulous Kuli. I am privileged to have been part of your journey

Thanks Robin! It’s been a very uplifting experience and journey to finding my Voice!

Truly remarkable lady and devoted mother and wife. Goes to show that nothing can hold you back if you have desire and passion. Well done.

What an amazing story, Kuli. You’re an inspiration to us all. Thank you for sharing your experiences of Germany both then and now.

Beautiful villanelle and a moving story. I would say you’re anything but “surprisingly normal” !!!

Well done, Kuli! And what a fantastic experience 🙂

So beautifully written and inspiring. Proud to have read your work and the one thing that stands out more than anything…no matter what race, gender or health issue you may have… anything is possible. So glad I was part of your life as a child in school and now as an adult. Keep doing what your good at

Well done Kuli We are proud of you!

This is fantastic, Kuli! What an inspiration you are. Loved the villanelle.

It’s wonderful to see you go from strength to strength. I am so pleased for you Kuli

Kuli, I have known you for over 20years, as my neighbour and my friend, although I did not know about your early life, I have always known what a lovely clever person you are, and nothing has held you back, I hope your remarkable work and this story inspires others to realise, no matter what gender, race, or disability they may have, that anything is possible. xx

What a story is yours. Indeed, what a life is yours. Thank you so much for sharing your remarkable journey through life. Blessings…

Your journey in life is truly inspiring. Your Survivor poem has touched a nerve and I admire your skill and talent in writing. I can imagine the impact you must have made with the students in Berlin.
You are a role model for many women and people with disabilities and I feel proud to know you.
I wish you every success.

Dear Kuli,
I thought the account of your Berlin trip was fascinating to read and I so enjoyed your villanelle Survivor.
You have a unique gift in being able to reveal the real you to the reader in the outside world.
I like your rose gold jeans very much… I’d like to order a pair with a 36″ waist and 29″ length from your seamstress immediately!

A very interesting account of your trip and past experience Kuli, and absolutely loved the poem! You have inspired me to read more of your work which I shall enjoy doing. 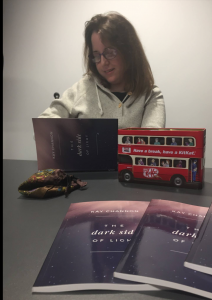 Thank you so much for this fascinating, honest blog Kuli. Really well done on the poem Survivor too. I’ve always been impressed by your work and hope that one day we can meet.

Your life so well documented in writing,your story so well written and presented for us to read it leaves me thinking how strong you have been through life facing different hurdles.
You should make a film about your life im sure it would be a hit.