Legitimately could’ve sworn that I posted this back in September – better late than never though, right?

Welcome to the second part of my two-part blog documenting my 2 week ‘Drawing Marathon’ experience of the Royal Drawing School. As described in the first of these two blogs, this course was the core part of my Emergence Bursary from artist-network, Shape Arts and Disability Arts Online. Onto week 2!

I felt more confident going into this week – I was familiar with the route in, the building, the structure, what I had to do. There were a few new faces this week to replace the ones we lost from last week (as people could choose to do either one of the weeks or both) and I recognised the confused look on their faces about not knowing what to do with themselves on arriving into the studio. Those who had done the first week were generally very helpful at giving some guidance.
I don’t honestly remember all that much from today, except from the fact that one of the tutors brought in his very tiny sausage dog, which was VERY cute and had the ability to transfix a room full of 40+ people. It was a full day of life drawing; there were two models – male and female – and we did a load of fairly quick charcoal drawings. I remember wondering if I would be able to see a noticeable difference in the quality of my drawings compared to last Monday. But I don’t remember if I saw an improvement or not! 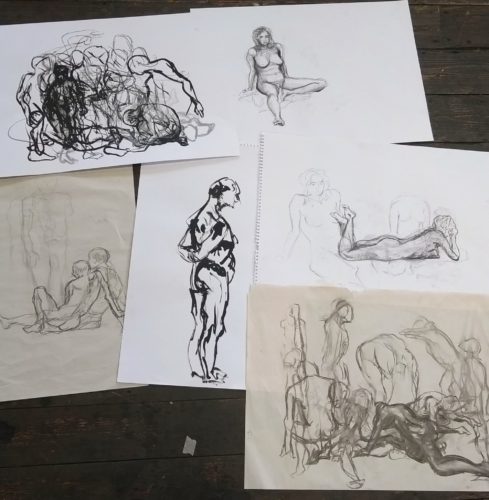 I was really looking forward to today – in the tradition of many an artist, we were going to draw a musician! The woman we had in was an amazing cellist. She sounded incredible. I had really struggled with the overwhelming silence the previous week so to have the room filled with sound was a very welcome and refreshing change. I learnt quite quickly however that I can’t draw cellists very well! I think it’s the flatness-but-roundness and structured symmetry of the instrument itself that I found difficult.

I enjoyed the creative freedom of drawing her deft movements though, how her bow arm is full of loose but precise energy whereas her fret arm held a controlled tension – it was really interesting to try and capture that life. There was one thing we were instructed to do which didn’t really work though. The idea was to make marks which firstly reflect joyful sounds from the cello, and then marks which reflect sorrowful sounds. Excellent exercise in principle, except for one problem – it was a cello. A happy cello sounds very much like a sad cello. I don’t think that one was thought through!

In the morning we had another hour lecture, from the same woman as last week, about how artists have drawn/painted musicians over the years and how music and art interlink. It was interesting and introduced me to new work yet I held the same critique as last week, being that there was no real depth or context to much of what was being explored.
The afternoon was very much in my comfort zone as we did some really enjoyable experimental exercises. The best one was where the artists took it in turns to draw in front of the cellist, which she then interprets as sound. And the rest of us around the room respond to that sound on our own paper. This group improv exercise resulted in my favourite piece of the day, which was totally abstract compared to everything else (which I generally wasn’t pleased with).

My partner is a very accomplished guitarist and it got me thinking about how we could play off each others crafts in developing our skills and in producing new work. We’d be constantly challenging and trying to outsmart each other so it’d keep us both on our toes! We spoke a bit about how this could work between us and have some ideas – watch this space!
Another thing I remember from this day was seeing one of the studio technicians wearing a 2019 King Crimson tour t-shirt and feeling gutted that I’d missed them. Funny what random things stick in your mind isnt it?

Today was an off-site day. There were a few on offer over the two weeks and we were encouraged to choose at least one during that time so I picked this one. It was at one of my most favourite places in the world, where I used to frequent as much as I was able as a child… The British Museum! I love this place so much. Such a shame most of it’s legacy is built on theft, slavery and an exploitative empire :/
I was dead excited to see what the day would entail.

In the morning, we headed over the to the Greek section where all the pots were. We were asked to look at the composition of the figures and decorative work on the pots, noticing the symmetry, movement, pattern and the contrasting use of colour. The first exercise was to find a pot we liked the look of and copy it. Not the most exciting thing in the world, but ok! Got comfy in one of those fold-able gallery chairs and got to work. To be fair, I quite enjoyed doing it. I don’t tend to copy things often but it was useful to do so as I remembered how much you learn by copying something. Nowt wrong with going back to basics.
The second exercise was to find two objects in this gallery and use them within in the same composition in the style of the Greek pots (in terms of positioning, composition etc). This was pretty tough to do because of how many of the objects in these galleries were laid out, like the differing eye levels (so if it’s up high you have to stand up to see it, but that makes it hard to draw) and positioning in space. In hindsight I wish I just went for a stylised look than trying to make it look real! Would’ve been much easier!

I really struggled at the British Museum. At first, the space we were in was relatively quiet, but an hour or so in and it was horrible. Every school in London and every tourist with a camera seemed to be visiting at the same time, so not only did the already stuffy room soar in temperature and noise, you had hundreds of people peering over your shoulder judging your work as you’re trying to draw… it was horrible. I don’t know how the less experienced, less confident drawers managed to be honest. Imagine if you’re venturing into drawing for the first time since childhood and you have all that pressure and weight on you. I moved away to a quieter area, but it seemed that when the crowd noticed you there, they wanted to come and see what had caught your interest enough to want to draw it.

Many had this tendency to stand there behind-but-to-the-side of you, boring their eyes into you and your work and hovering there forever, muttering, with the expectation that you’d turn around and acknowledge them. Please, people, don’t do that. And don’t do what scores of other people did too, which was to take unconsentual photos of me drawing, my work, the object of my focus, of my whole drawing set up… and/or take selfies with me in the background. I can sense your obnoxiousness and I can see you in the reflection of the protective glass. At least try and be sly about it. Just please stop making me, and countless other artists, feel like an exhibit, there for your own entertainment and pleasure. I didn’t mind the small, inquisitive children so much (they don’t know better) but 90% of the culprits were adults. Don’t get me wrong, I appreciated the sentiment of the handful who politely and respectfully tapped me on the shoulder and said they thought my drawing was good, but generally the constant overwhelming presence of intrusive onlookers and cameras set my anxiety and paranoia off. I made my tutor aware of the situation, and she was supportive of me (although I sensed she didn’t know how to handle it), as was another student I got chatting too. The others seemed to feel angry and annoyed at the crowds too, but it didn’t seem to affect them in the same way.

After lunch, we went back into the Greco-Egyptian galleries and went around drawing objects. It wasn’t a productive afternoon for me. The crowds were just as intense and intrusive to the point I started seeing imaginary figures in addition to the real ones in the reflection of the protective glass. I tried to find things in quiet corners, but few objects in those areas caught my attention and it felt like the crowd followed me there again anyway. I dunno. Just wasn’t a great day. For people with autism and anxiety who plan to go do the Drawing Marathon, don’t bother with the outdoor excursions – they were all this intense apparently.

After yesterday, I was looking forward to getting back into familiarity of the studio. Especially today – we were drawing a contemporary Indian dancer! She was lovely. And the music was refreshing. She was so nice to watch, and even better to draw. The first exercise, based on a Bauhaus exercise, was to capture the poses she made as two rectangles and one triangle. This exercise was to look at the shapes she was making with her body. Yes, loved this. I unexpectedly got a lot of praise for these as well.

During the rest of the day, she had dance pieces that she moved through, holding particular poses for a while to allow us the space to draw it. Yes, loved this too. Was difficult to do, but this was much freer, looser and experimental than some of the other directives we had during the fortnight, so this was good for me. I discovered that drawing loose suggestive marks alongside elements of detail (hands, feet, hair) really demonstrates the movement effectively. I did better in the morning, peaking around lunchtime (similar to last week) but this was an enjoyable day for me. 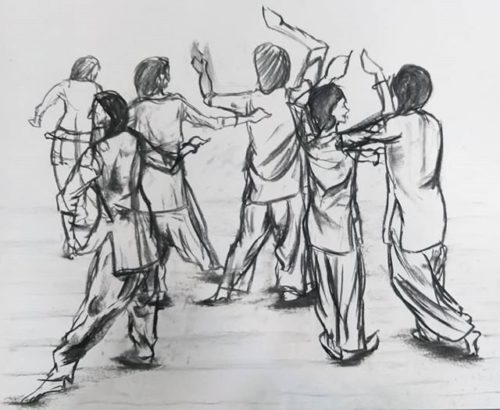 I went in feeling kind’ve sad that this was the last day of my experience, my last full day in London. I was conscious of taking everything in en route (“Oh, the regular buses! Oh the buildings! Oh the tube!”) as I wasn’t going to see much of it again for a good while, which is probably why I noticed the most awesome sign, alongside other health and safety notices, on the my Underground carriage: 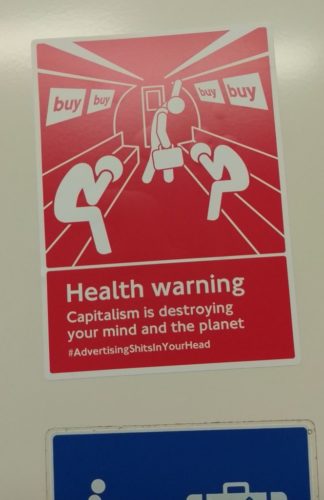 This last day was all about the life drawing again – male and female – and again, I made a conscious effort to see if I could notice any improvement from the first life drawing day. We did mostly quick drawings with a 35 minute one in the morning. Again, I don’t remember anything hugely specific from the day. The tutor gave the same confusing speech as he did last Friday, and we had another crit scheduled. Like everyone else, I laid my work out, but it looked like I was going to be at the end of the line this time. It seemed that a few of the students who experienced the lackluster crit the previous week picked up their stuff and left before their work got looked at, myself included. It was a real unceremonious end to the experience. And again, no real opportunity for feedback.

Thoughts from the week

And that was my experience at the Royal Drawing School! I will be exhibiting some of the work created there at solo exhibition in the Humber region sometime soon, funded by YVAN and the rest of my Emergence Bursary.