I am a perfectionist with a huge problem with procrastination. It’s funny to me that perfectionism is the problem they tell you to admit to in job interviews like it’s a good flaw that your future employers might want you to have. In my experience it’s a terrible flaw, in my experience, it’s paralyzing. (I talked about this a little in my last post) Procrastination and perfectionism are bound together, I know this because in 2012 I spent 2 days listening to an audiobook called ‘How to Stop Procrastinating’  three days before handing in my final degree. The book explained that both perfectionism and procrastination stem from deep-rooted emotional issues and had a load of exercises to help you discover what the cause of your procrastination is, and when I get round to doing any of them, I’ll let you know my results. 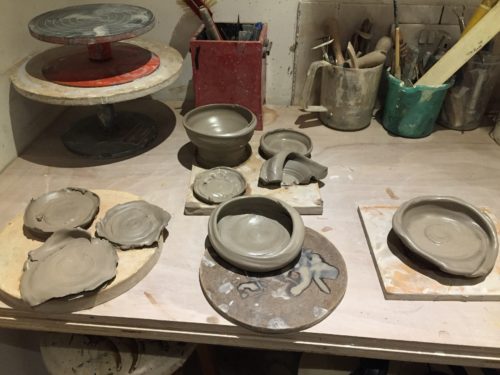 This is the results of my third ceramics class. My phone malfunctioned and deleted the pictures from the first week. I guess it was getting into the spirit of things.

This blog post is not about that book, it’s about the teapots I’ve been making. We’ll get there I promise. A few years later in 2015 when I should have been working on a hand in for my MA I read this Tumblr post by author and illustrator Ursula Vernon (it came into my life via Neil Gaiman) advising all creative people to study ceramics, specifically throwing,  if they ever got the opportunity.

The whole thing is good, you should read it, but this bit particularly stuck with me “Pottery, particularly wheel-throwing, is wonderful for this, incidentally. You fail over and over and you fail fast and you are creating quantity to lead to quality. You throw and throw and throw and things die on the wheel and things die when you take them off the wheel and things explode in the kiln and after you have made a dozen or two dozen or a thousand, none of them are precious any more. There is always more clay.”

She also talks about how liberating it is to smash up the stuff that didn’t work at the end of term. (It’s worth noting for context I still own everything I ever made on both my degrees. Even the dreadful first-year stuff.)

I’m precious about my work sometimes, (a lot of the time) I’m afraid of making mistakes. I’m pretty sure if I’d ever done any of that hard work exploring the reason I procrastinate they would have told me fear of failure is a major cause. Everybody who writes anything about creativity and the making of art agrees that you can not simultaneously be afraid of making mistakes and make good art. It’s an idea that’s very much in the zeitgeist. Brene Brown says it. Austin Kleon says it. Amanda Palmer says it. Better, more intellectual and impressive people I can’t think of right now say it. It’s advice I hear over and over again and never embrace your failures, embrace your mistakes, and yet I still hate making mistakes, I can’t get past it, it’s a problem. 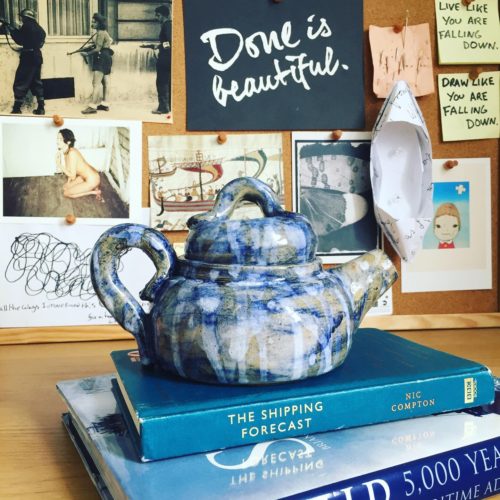 My first successful teapot – it even sort of pours.

When I was starting to do some experiments for my Emergence Bursary work I wanted to so stuff where using my hands was an essential part of the processes because not being able to rely on my hands after an MS relapse is partly what the projects about. Experimenting with ceramics felt like such a perfect way to do that because clay is so tender and tiny hand movements leave lasting impressions in the material. That’s how I pitched the idea to everyone anyone, but I was also thinking back to Ursula Vernon’s Tumblr post, and hoping learning to throw would finally cure me of my fear of failure.

Am I cured? Honestly, learning to throw is amazing. I’m embracing the process, I’m learning by doing, I’m making frequent messy mistakes. I was bad at it when I first started. Like even for someone who had never done it before it was bad. I’ve now seen quite a few other beginners and my first efforts were objectively the worst. But that’s not the point, I embraced the process, I carried on. I spent five weeks being terrible and making rubbish and chucking it out and I made this misshapen teapot that only sort of works, (it lovely, I’m proud beyond all proportion).

Then I spent another five weeks being slightly less terrible and making a slightly better class of rubbish to chuck out, and I’ve just finished a second teapot that marks a significant improvement on the first. When I look at my teapots I can see the progress, I can see the effort and the learning, the ghost of all the afternoons where every single thing I made ended up in the slop bucket. It’s magic, I’m so glad I did it. It hasn’t cured me. 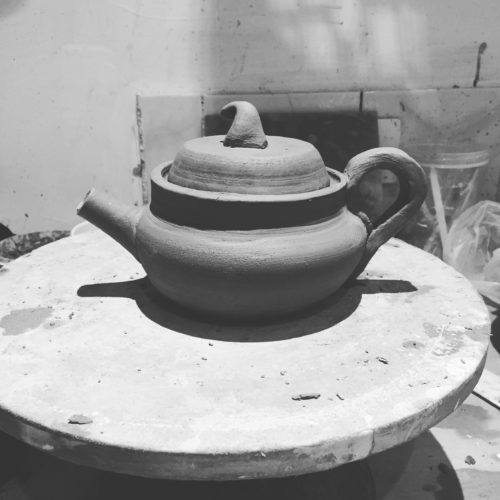 I assembled Teapot 2.0 this week. It’s drying before it goes in the kiln.

Ahrgh. I know. That’s a very unsatisfactory conclusion to this story. I’m as disappointed as you are. Wouldn’t it be better if I’d grown and changed as a person? And I guess there’s still time, I’ve still got another 10 weeks of ceramics lesson. I haven’t fully embraced the Ursula Vernon philosophy and smashed up the precious teapots I spent so long making.

I could do it in a glorious live stream at the end of the year. But I don’t think I will, I think the truth is this, getting comfortable failing in the ceramics studio is a good thing worth doing, but I think it maybe only gets you comfortable failing in the ceramics studio, I’m not sure it’s a transferable skill. Here’s the lesson I am reluctant to admit I have learnt. You have to slay the actual dragon. An effigy will not do. What I mean by this is – I can not get over the fear of writing this essay collection I’m meant to be writing by being bad at ceramics, I can only do that by writing a bad first draft of my essays.

Ugghhh. I guess I have learnt and grown in predictable ways through this process. I just don’t want to because the lesson is I have to get over my self and get on with my work. Which I think we can all agree is the worst possible lesson to learn.

Tottaly agree that pottery & ceramics are a great craft for teaching about failing (clay is a very sensitive material!) and building up a store of perserverance. It’s taught me to keep on going as well as an artist.

My problem now is I want to use ceramics to get perfect at failing.