You’ve probably heard by now that our event at Tate Exchange on the 21st of March has been postponed. I can’t pretend to be anything other than gutted about it. I also can’t pretend that it’s not 100% the right decision. I take medication that modifies the way my immune system functions to help manage MS and I had a phone call from my consultant today telling me to start thinking about social distancing. We are living in a hard time, and we all have to be smart right now and look after each other. 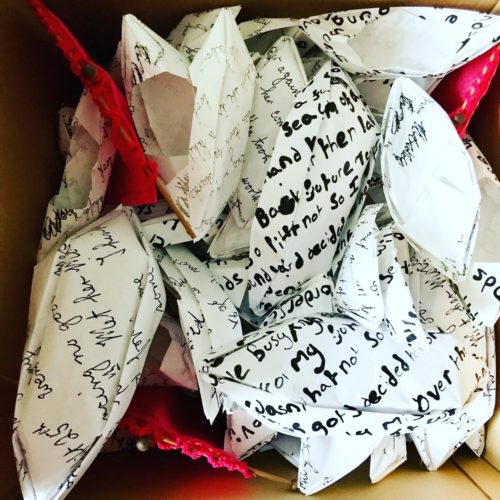 The boats packed up ready to go to London. I got the email saying the event was cancelled 20 minutes before the delivery driver was due to collect them.

Over the past year of I’ve been working on Seaworthy Vessel, a project which, amongst other things has seen me working on a fleet of 1000 origami boats. The project is in part, about my Great Grandad who, after an injury to his hands in WWII knit countless slippers as rehabilitation. In a lot of ways folding these boats has been my slipper knitting, as it’s really helped me learn to trust my hands again after an MS relapse affected my fine motor skills. One of the things I was really looking forward to at the Tate event was seeing all the boats out together, I don’t have room anywhere to put them all out. I was also really looking forward to running a drop-in origami workshop throughout the afternoon.

I’ve told this story quite a few times at this point, I first had the idea for Seaworthy Vessel when I saw a line of massive anchors in a scrapyard from a train window. I knew from a lifetime of conversations with my Great Grandad who was in the merchant navy that ships get scrapped when they aren’t seaworthy. I got caught up wondering what it would mean if you could apply this idea of seaworthiness to people. If there was a test that you could pass or fail, what would that mean for disabled people? That’s what I put on my Emergence application. The bit I didn’t add was this, what would it mean for unnamed artists who don’t have their shit even a little bit together? This is the part of the story I have told less. A year ago when I started work on this project I related more to the anchors in the scrap yard than I did to a ship on the wide-open sea. 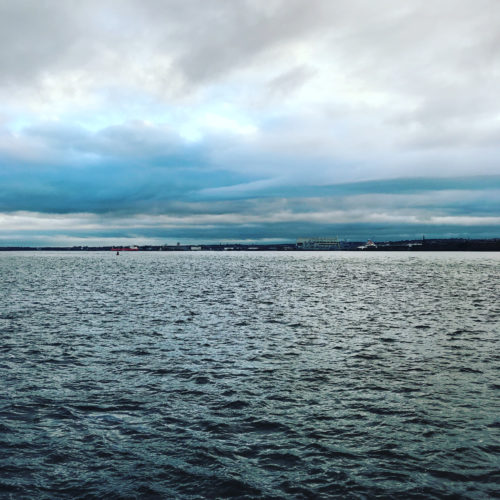 This isn’t the sea, it’s the river Mersey, but in these times we all have to work with what we’ve got.

Working on this project for the last 12 months has taught me so much though. I’ve learnt so much about myself, and about ships and I think people in general. This project has taught me that we are resilient and adaptable, that we stay afloat in the most inclement of conditions. The final phase of my project, which I was going to be launching at the Tate Exchange was going to be all about helping people celebrate the idea that we are all seaworthy. Given everything that I’ve learnt, everything this project is about, I couldn’t really be faced with something like a global pandemic and not find a way to adapt, could I?

So, with that in mind, I’m still going to be giving my origami workshop on the 21st of March, only instead of at the Tate Exchange, I’ll be on Instagram Live at 1pm.

I still need to make 400 boats to hit 1000 and I hope you’ll help me out by getting involved (I’ve put together a full guide on how to do that here), I’m asking for people to submit some text to be included on some of the remaining boats or to make a boat of their own and pop it on Instagram with #IamSeaworthy so we can build a special online fleet. (Just so you know I’ll be pretending I’m living my true dream of presenting a Blue Peter make the whole time) 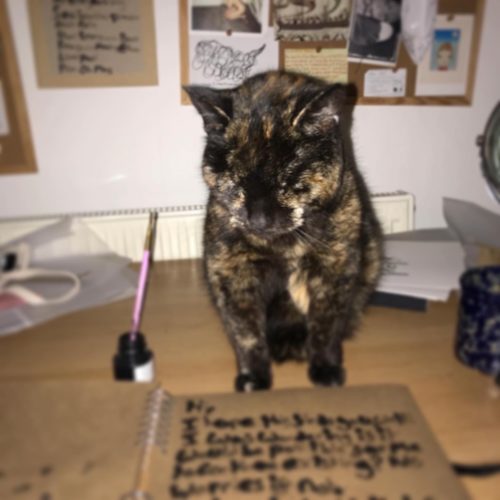 This is my home working situation. I need to connect with humans. My cat is a very harsh citric.

I think something I’ve really learnt over the last year is that the thing I value most as an artist and a writer is connecting with people. I think I make work both to try and figure stuff out and because I want to start a conversation about the stuff I’m trying to figure out. The lengths I’ll go to for a chat. I am not one of those artists who would toil away in the studio for years perfecting a masterpiece and then never care if anyone ever saw it. I only make work because I want people to see it or read it. I was planning on bringing the proof copy of my project book ‘Some Days I am The Sea’ down to the Tate with me so people could read it. I don’t want to wait until the event gets rescheduled to share it – I’m impatient, so for the next few weeks I’m going to make it available as a free download on my website.

I’m still going to be trying to figure out ways to connect with everyone over the coming weeks and months. I think that’s one of the most important things we can all be doing right now, staying connected. So please, if you fancy it, come and make a boat with me on Saturday at 1 pm.

Ha ha, love that your cat is your harshest critic. With me it’s the dog!