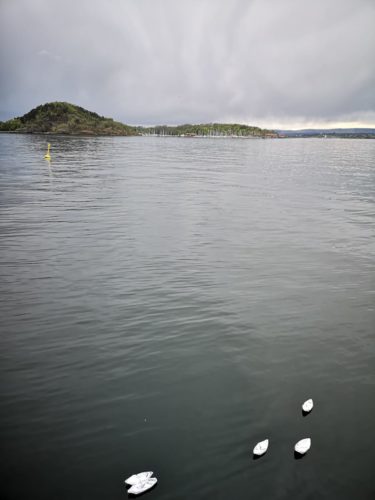 Here are some origami boats I launched into the Oslo Fjord in May. Hopefully, they will be an appropriate allegory for my artistic career in that they went to unexpected places and stayed above water significantly longer than expected.

When I was doing my MA another student had this quality that I really admired, she would always admit when she didn’t know things, I do not have that quality. Where she would say “I don’t know, could you tell me more about them?” I would say “Oh yeah sure, I know all about that.” Then google them later. I am, by instinct, a bit of a charlatan. Sometimes that can be a good thing, false confidence is almost as good as real confidence in a lot of situations. Sometimes it holds me back though, you can learn things a lot faster if you admit that you don’t know how to do it in the first place. I think the art world, (probably the whole world) would be better if people like me stopped pretending we know what they are talking about and just admitted that we have no idea what we are talking about some (a lot) of the time. With that in mind, I thought this would be a good chance to admit in a public forum all the things I’m a little bit embarrassed not to know about the art world.

When do I stop being an emerging artist? When am I emerged? I’ve seen some places say five years out from art school, which technically is almost me, but since I spent three of those years waiting for my limbs to stop moving of their own volition, phoning up hospitals to track down my lost referrals and watching Judge Judy I don’t think it counts. Is it when I start working with institutions? When I get a show in a public gallery? When my mailing list isn’t made up mostly of blood relatives? (This is a joke. I do not have a mailing list, is it when you get a mailing list? Is it when you stop undermining your serious points with jokes?)

What on earth is a self-directed residency? The Jerwood Bursaries fund them (according to their guidance notes), but like, what the heckins is one? I’ve consulted my best connected and most intimate art world contact about this (google) and they provided me with exactly zero useable answers. 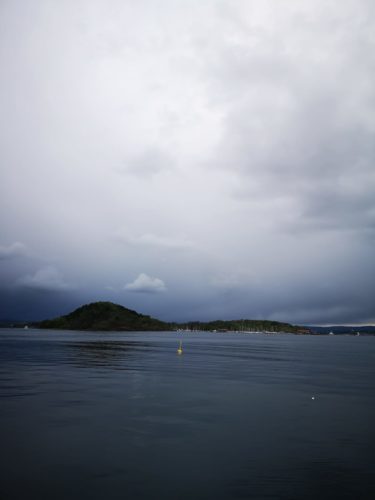 Maybe you already know this very view features in the background of Edvard Munch’s The Scream, but did you also know the existential crisis that inspired the painting occurred in a mentoring session between the artist and a curator that went badly wrong?

Is it one of those residencies (which are news to me) where artists just pay to go on them? Is it like a thing where artists approach organizations about using their resources but the organizations don’t provide any official or monetary support? If I hole up in a rented cottage in Lindisfarne for a month and take daily windswept walks and make a tonne of work inspired by isolation and history and the mournful cries of seals is that a self-directed residency? If I hang out with some seals for a month and then put that on my CV as a self-directed residency will I get in trouble off like the art world equivalent of trades description or something?

How do you get a mentor? I would love to have a mentor, I feel like that would really help me figure out what my next steps are in my career and I’ve seen a few funding opportunities that would pay for this, but when you read the guidance notes it basically says “You don’t absolutely need to know who would mentor you, but let’s be real we aren’t going to pay for you to get mentoring from your imaginary friend?” How do you find artists or organizations that offer mentoring? And once you’ve found them, how do you know they are any good? I have had some less than ideal experiences with random organisations in the past.

On that topic, how do you make contacts, period? I was talking about my goal to show in Newcastle the other week and someone asked me “Do you have any contacts in Newcastle” and I had to say out loud “I do not have any contacts anywhere.” I read guides for emerging artists and they always say, “Use your contacts,” and I’m like mate, who is it that you think I know? I live in Haworth. It’s just me and the ghosts of the Bronte sisters, who, frankly, are unwilling to embrace the cooperative ethos necessary to put on a group show. This is actually a pretty serious one though when we did the Emerging Artists Discussion at the Tate Exchange back in March, social isolation was one of the most common things people said was holding them back.

I honestly am starting to believe that the art world (maybe the entire world) would be a better place if people like me just stopped pretending we know what we’re talking about when you don’t have a clue. Here is what I’m learning: admitting out loud (or in this case, in writing) that you don’t know the answer is a powerful thing to do, it gives you chance to learn, the opportunity to ask questions and get help. If it turns out that nobody knows the answer to your questions you get to learn this – that there’s nothing to worry about, that everybody is winging it, that you aren’t alone. 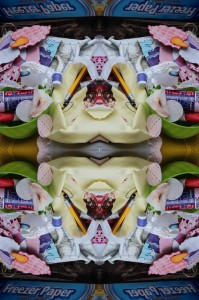 This totally resonates with me. However, I do vocalise this. I am always saying that I don’t understand how the art world works and asking more established people. The main answer I get is ‘there is no right or wrong way to do things’, which offers no real answers at all. If there are explanations, they are often coded in artspeak. Sometimes I don’t even realise they are. Certain words seem to infer different things in the art world, beyond what they simply mean in regular life. Now I’ve been in it a while and particularly having written lots of… Read more »

Kirstina I think a guide to being an artist is an excellent idea! I promise to compile one if I ever make it.

This is great. Thank you

Many thanks, I really enjoyed reading this piece. Ans thanks for Christina’s comments too. Both are really helpful and timely

Thanks Sue, I’m really glad you enjoyed it.