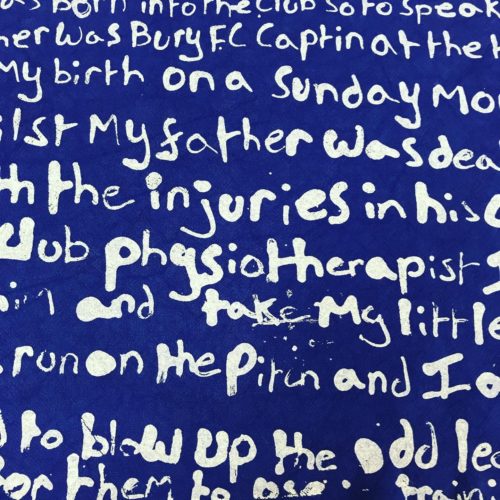 Here’s a close up of a fan account of playing with her dog on the Bury pitch while her Dad worked at the club.

I’m one of the many people attempting NaNoWriMo this month, which for the unfamiliar is when you try to write 50,000 words towards a long-form project in a month. The idea is basically that you write a very rough first draft of something without editing or deleting anything you’ve written and for people like me who really struggle with perfectionism, it’s a really useful exercise. This is my fifth year doing Nano, but last year was the only time I hit 50,000 words. As I’m writing now I can’t help but think back on last year, I was working on a narrative non-fiction project and really running out of things to say when I saw the call out for the applications to the Emergence Bursary. Because I was really struggling to hit my word count I figured I’d use the application questions as writing prompts, never intending to actually apply. Then right at the last second, I decided to send it off anyway. The moral of this story is to apply for stuff, even when it seems unlikely because, as it turns out, unlikely things happen.

Here is another example of an unlikely thing that has happened in my life this month; I’ve had a specially commissioned project in an exhibition about a football club. I was very surprised by this commission, I have never watched a football match in my life, I don’t support a team. I probably know more about Situationist Asger Jorn’s proposal for three-sided football, and I don’t know a lot about that, but I did once listen to a documentary about it on Radio Four. In May when I went to see the Spice Girls at the Etihad Stadium my friend asked me if I was bringing a jacket in case of rain and I said “Why, is it an outdoor venue?” and she said, “It’s Manchester City’s home ground.” And I said “Oh, that’s a football club right?” apparently they are quite famous.

You can understand why when my friend Zoe Hitchen first told me she was putting on an exhibition about Bury Football Club and she wanted me to make some work for it my first instinct was to say, sorry, you’ve got the wrong girl. Zoe asked me to hear her out, she told me she had a story I would be interested in hearing. So we met up for a coffee to talk about it, but I was pretty sceptical and full of preconceptions. Zoe told me about over 100 years of history at the club and the community around it. She talked about its closure this year and all the feelings it evoked. As she spoke it became clear to me that this project was not really about football at all, or at least it’s not just about men running after a ball on a pitch. It’s about community and loss, it’s about emotions, intimate family histories, it’s about people finding connections with each other and coming together in spaces that contain links to their past and hopes for their future. It’s about women carving out spaces for themselves to thrive in. Those things are all very much my bag. 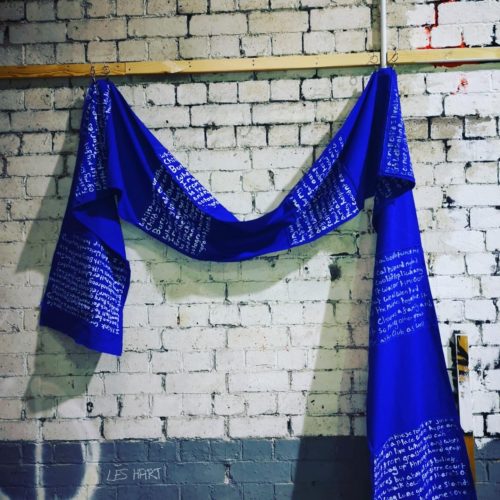 Here’s the We’ve Got Joy Scarf at the exhibition.

That’s when I had the idea for We’ve Got Joy a project that seeks to celebrate and commemorate the extraordinary women who found joy and community in Bury football and each other. Inspired by Bury fan Joy Hart who chained herself to the gates of the club to protest its closure.

The project had a pretty quick turnaround, so I gathered first-hand experiences from female fans using an online survey. The stories that came in were very varied, but they shared common themes, family, found community, a sense of belonging. I also did some research into the history of Bury for the project and found that the Mills in the town where once a world-leading centre for the dyeing and printing of calicos, with some printing techniques invented in the town.
The project culminated in a five-meter long scarf printed with text gathered from female fans describing in their own words what the club has meant to them. To embody the idea that whilst the club is gone the community remains. The scarf is made from calico printed and dyed to represent the towns industrial past in the team colours.

The project was on show this weekend at the We are Bury exhibition as part of the Design Manchester Festival. Full disclosure, the making of it nearly killed me because my MS fatigue was really bad when I was doing the printing for the project, and five meters doesn’t seem huge until you are printing and sewing something that long, then it seems very, very big indeed. I’m trying right this very second to remember the points where making We’ve Got Joy felt impossible, and link it my mind with how good it felt seeing participants interacting with it this weekend because right now writing 50,000 words feels a bit impossible too, and I’m also reminding myself that last year it felt impossible that I’d ever be accepted onto Emergence. But at least with this blog post, I’m 800 words closer to the end.