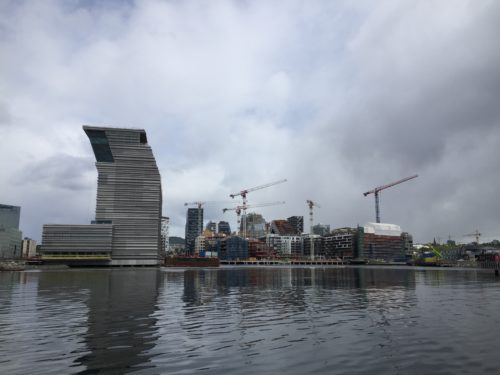 This dock was the main merchant shipping hub in Oslo in the 1930s, soon it will be the new Munch Museum.

I went to Norway at the start of this month. Then I came back and spent 23 days trying to write a blog post about it. I’m not exaggerating (well, not much) when I say I sat down every evening and tried to get something down, but I just couldn’t. It’s partly because my MS fatigue has been off the scale since I got back, a cosmic trade-off for the fact it wasn’t too bad while I was in Norway I guess.

It’s mostly because I’ve been psyching myself out. I do that sometimes when I’m working on something I care about. I really want to do a good job and nothing I make or write feels like it’s good enough so I procrastinate instead of doing it. The longer I put it off, the more impressive I feel like it needs to be, the more I hate the work I make for not living up to my unrealistic expectations, the more I hate it, the longer I put the work off. You get the idea. All this is just a long-winded way of saying, writing this blog post nearly killed me, so as you read it, please be kind.

I was in Norway as a sort of pilgrimage to my Great Grandfather, who was regularly sailing from Newcastle to Oslo and Bergan with the Merchant Navy. The ship he was serving on had to flee the country at the outbreak of WWII.  He used to joke that he sailed round half the world twice with the merchant navy. I don’t know every where he went, but I know it was a lot of places, most of the world. Norway was the only place he ever wanted to go back too. Having been there now, I get why something about it lingers in you.

There’s so much I want to say about my time in Norway. The mystic beauty of the fjords, the way the air felt; an encounter I had with a singer sewing machine on The Fram (that’s the ship Amundsen used on his expedition to the south pole). And the fact the apartment I was staying in turned out, by fate or coincidence to be on the refurbished docks that 80 years ago all merchant shipping was coming out of. I launched some of my paper boats into the fjord. I’d love to tell you about it but I don’t have the words yet. 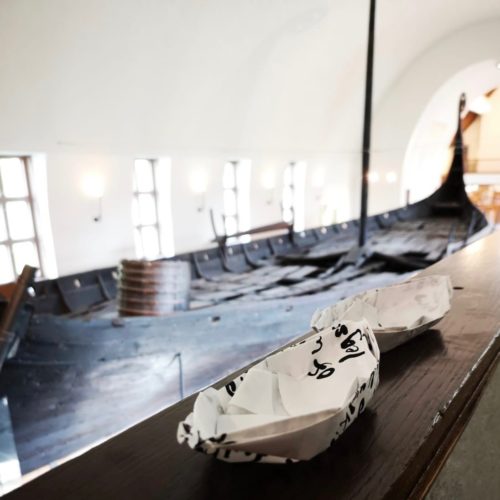 Here are some of my origami boats with a Viking ship.

Here’s what I have figured out how to say. I loved my time in Norway, I miss it in a way I didn’t expect. When I was there I went to see these Viking ships, the best preserved Viking ships still in existence. I couldn’t get over them – because they were beautiful and easily the oldest thing I’ve ever stood in front of and just seemed so small in comparison with the sea.

They looked so fragile compared to even the most basic of modern ships, like the ferry I took to visit the museum. But they worked didn’t they? Vikings sailed their boats as far as North America, far enough for peacocks to end up as grave goods in Oslo. Those boats were strong enough to get people where they wanted to go.

That’s the lesson that finally got me through trying to write this post. Maybe it’s not everything it could be, maybe I’ll build better versions in the future, but it’s the best I can make it tonight, and hopefully, it’s enough to get us where we need to be.

Thanks for this blog Letty. You convey the connection between your origami boats and the viking boats you’re responding to, beautifully. From this piece of writing I get a real understanding of the fragility that is behind your intention in making the paper boats and the relationship to your family history. I think there is something gently revolutionary in this kind of art writing. It cuts against the grain of the pretentious art bollox that’s been taught in art schools for the last 50 or 60 years through its honesty in describing your relationship to the creative process using straightforward… Read more »

Thanks Colin, I’m really glad you liked it. Means a lot to me.