Hello and welcome to week three of the Measuring Up project blog.

The Clock Is Ticking

Yes, the clock has been ticking in more ways than one this week. It’s our last opportunity to make new work, as next Monday we will start to rehearse.

Personally, I have had to work hard to stop worrying about the fact I have to learn all of this new material being generated. Such thoughts can very quickly, if allowed, filter into the rehearsal room and stifle new ideas.

So I have banned them!

But the ticking hasn’t just been in my head. For the motif of a clock is important throughout, we’re using it both musically and visually. The tape measure being swung as a pendulum may have gone, but the idea that time can be both an enemy as well as a driver is still present. 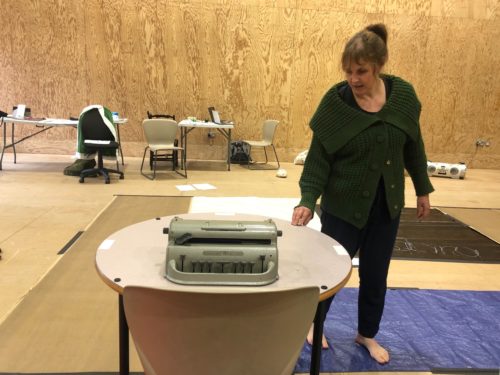 Mandy navigates the central table feeling for the braille markers.

For example, the set has a round table in the centre on which my brailler is placed. We like the idea that it can be seen as representing either a clock or a compass. The round table is a useful navigation tool for me, I find that by running my finger along the edge, I can easily move from one part of the set to another. However, a few times I lost my sense of direction and wasn’t sure which way I was facing.

Then when working with Jos, we had this idea of putting braille around the edge of the table. We already imagined it as a clock, so why didn’t we make it an actual clock face. We put braille numbers around the edge and in between tactile dots.

This addition has increased my ability to move more confidently around, and create some very precise movement.

I love the fact that ideas seem to flow from everyone in the room. We have this list of scene ideas on the wall and from this, each day we tackle three or four. There is not always the whole team in the room, but whoever is there always has an impact.

For example, Craig, our musician, has been in twice this week. He improvises music as we develop scene ideas, but the music he creates has a direct influence on the development of a scene.

Last week we improvised quite a naturalistic scene around the fact that many characters created by the writer are cut long before they ever get to the the recording studio, TV film set or stage. Francesca, our Dramaturg, was in the room when we were talking about how we needed to move this scene into a more theatrical form. She immediately identified the subject as ‘Killing Your Darlings’.

This put a whole new idea into my head, an idea so strong that it woke me up in the middle of the night. Killing the characters I’d loved and created was exactly what the scene was about! The next day Jocelyn was in the room and we came up with a concept of creating physical representations of these characters that I could actually kill.

So we began work, I wrote some lines then we put it on the floor. Initially I worked with our co-director Charlotte to create the physical shape. Then the next day Director, Matt along with Craig added a whole new and much, more sinister layer. Just another example of how our collaborative approach is pulling this new version of the play together. I just need to try really hard not to kill any of these darlings!

Thank you for reading. I hope you’re able to join me again next week.