Welcome to week two of my blog, where I hope to share some of the more interesting developments in the creation of Measuring Up.

Getting Stuck In!
It’s been a full-on week. Matt, Charlotte and I have been in the rehearsal room every day developing new ideas, and have been joined at different times by others in the team. I’m really keen to keep away from naturalism so we’ve been introducing music, dance, spoken word and sound. 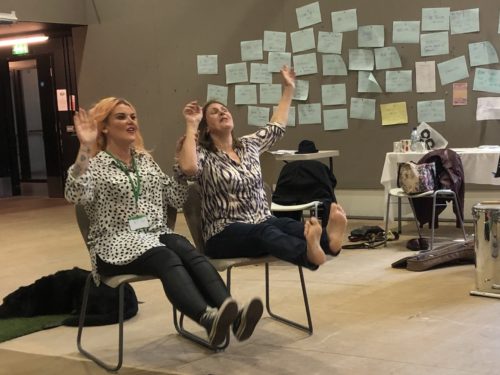 Rachel (left) and Mandy (Right) working on a scene. They sit together arms raised in motion.

Layering these elements on top of each other, both to provide artistic interest, as well as multiple access.

This week we’ve been joined by Rachel … who is an actor-signer. This has enabled us to explore how the scenes might work physically on stage. We’re really keen that the BSL Interpreter doesn’t simply stand on the edge signing words, we want them to be in there, part of the action, moving, responding, having a real role.

And to warm us up, Matt and Charlotte have had us doing quite a bit of dancing. In a new Jazz Braille scene, which shows me creating comedy, we end up bopping. We’re also working on a dance of Love, which tells the story of my relationship with my husband, which is quite beautiful.

A Set That Tells a Story
We’ve been considering how the set might reflect the writing journey I go on during the course of the play. How it might shift and change its appearance, how blank clean spaces might be filled, how various items might be dropped or thrown onto its surface. After all, when the writing finally goes well, there’s no time for anything else – especially not housework! 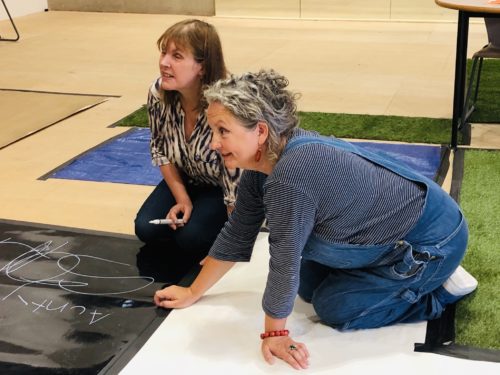 Braille Leaflets
We’ve also managed to find a way of integrating braille with a visual design on one sheet of card. We were advised that this was impossible, sticky lables or cardboard attachments were suggested, but none of us were keen on any of these ideas.

So Harriet the Producer worked with Laura our animator and marketing designer, to come up with a design that incorporates a block of braille text. Harriet then found a printer who has agreed to do an initial colour print, then they will feed the same carboard into a braille embosser to achieve the final integrated leaflet.

That’s all for now, but thank you for reading again and I hope you come back next week to catch up with week three.