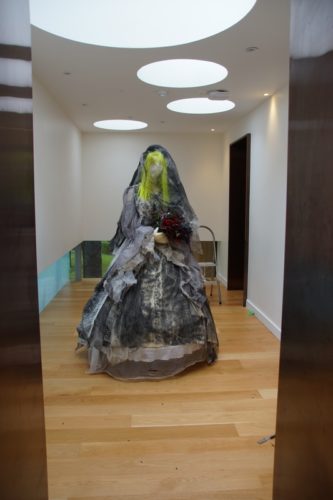 I am a multi-disciplinary artist and in 2012 I made work that celebrated the London Olympics and the Paralympics but also Charles Dickens’ bi-centenary, depicting Miss Havisham’s Wedding Dress. It’s now being brought out of storage for a new show, Impatient! Stories of service user advocacy at Bethlem Museum of the Mind.

Why Mr Dickens? I have always been curious about Mr Dickens, as he and I both experienced mental distress as young adolescents, and as the leader of largactyal shuffle walks, devised in Southwark he was a major part of our investigations. Not only did he live with his own mental distress, (he had server depression) but he visited asylums and hospitals and observed patients. One such observation known as the Pickwickian syndrome or “Extreme obesity associated with alveolar hypoventilation; a Pickwickian syndrome”…This “new” syndrome was described in a character, Joe the Fat Boy in The Posthumous Papers of the Pickwick Club, written by Dickens and first published in serial form in 1836-37. Source Meir H. Kryger M.D. Sleep and Be Well.

I often wonder was Dickens the first Dickens service user advocate to engage in co-production with services? I also noted that he uses the term ‘mental distress’ and not ‘mental illness’ or ‘mental health problems’.

The project that was called the Dickens News, and highlighted the fact that his books were published in the newspapers and he was paid per word, a very famous one is the Pickwick papers.

It was his personal life really that interested me, how he brought into his stories archetypes of people. Though I can only assume his observations in the asylums, I instigated a fashion show that explored Dickens characters by their clothes.

I chose to make Miss Havisham a woman from Great Expectations who lived in her wedding dress, after she had been jilted at the alter and robbed of her wealth by the man she was marrying, who turned out to be a conman.

Miss Havisham is very much a woman of her time. She was the daughter of a rich gentleman whom after her trauma becomes manipulative, restricted by the shame and harm she has experianced; she needs coping mechanisms. A single woman, who at that time needed marriage as an identity to be socially acceptable, and being a lady, made working unthinkable. The hate and revenge is clearly the only way she knows to protect herself

Charles Dickens is famous for his observations of patients inside asylums. Whether Miss Havisham is real or pure fiction, does not really matter, she embodies for me a state of suspended animation because of her trauma.

Miss Havisham’s wedding dress defines her sate on of mental health and her inability to let go and move on…how many times do those of us in mental health services hear the words, ‘let go, move on, get over it’.

What is meant by ‘let go’ ‘move on’, what do those expressions mean in a world where justice is only for the privileged and those with money? Miss Havisham is a metaphor of the all-consuming, overwhelming emotions of shame and trauma.

In my experience, the emotions of shame are at the core of a person it is an all-encompassing status, it comes from family and cultural territory which can consume you. Clearly Miss Havisham did not have access to talking therapies, so she had to develop coping strategies so wearing the dress and manipulating others became her roles.

For me, making this dress was fun, but thinking about my own mental distress, I don’t want to be her, yet traumas in my life have been reflected in her experience; in terms of the effects being all-consuming.

Bringing her out of the closet and making art is the only way I can move on, medicine and medical professionals are not the only cure. I am a trained artist and for that reason, art can help me choose what I want to explore in myself and in others.

2012 saw London embrace disabled peoples achievements through the Paralympic Games. Now in 2019 and many disabled people have died due to cuts to services and the glitz of the games is long gone. I believe the wedding dress I made in honour of Miss Havisham and her story in Great Expectations still bears the weight and that can be used as a metaphor to highlight the tragic political situation we find ourselves in, with benefits and support.

I hope you enjoy this piece and get to the show. If you are looking for Xmas shows I wrote a show based on the Dickens characters and I am open to redeveloping it and or any other works.

I am available to give talks run workshops and show art.

Those with a history of contact with mental health services have sought representation, support and advocacy for centuries. Service user advocacy groups are varied in nature: from grassroots to national, informal to established, conservative to radical, they reflect the diversity of society.This exhibition highlights the material culture of some of these groups, and charts the development and impact of their voices, and the challenges they have faced.