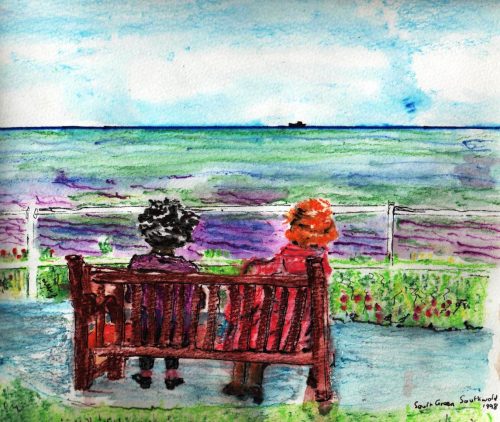 Algie and Doreen were in fine, nattering form: “We’re hoping the rain holds off” Algie told me. Like me, they had arrived early. Sitting beside my wheelchair space at the front of the coach, Doreen, a plump woman with frizzy salt-and-pepper hair, unpacked her bag, handed Algie his copy of the Star, and took out a packet of chocolate digestives. “Want one?” she offered. I declined, not wanting to start the journey with sticky fingers: it was already a warm day for our trip to Skegness.

Algie helped Doreen to polish off a good third of the packet as the coach began to fill up; most of the Rotherham Disabled People’s Association branch members were a bit like Algie and Doreen; some, mostly younger, more obviously impaired in various ways, were accompanied by older friends or relatives and brought various walking aids. The more elderly members, I imagined, might be content with sightseeing, staying on board the bus or finding a deck chair in a sheltered spot supposing ‘ the rain held off’.

I was new to this particular group of disabled people, but not new to disabled people in all their diversity, as I had worked in a disabled people’s outfit in London campaigning against discrimination. I had felt privileged to be part of a brave movement already on the streets well before I got there. It was interesting now to be part of this hardier but just as persevering group of’ ‘crips’ as we sometimes called ourselves in London but as an expression would not go down well I thought, on this particular trip.

I was getting impatient though. My friends Julie and James had not appeared. We had decided together on the trip, thinking that it would be a nice opportunity to do something independently from our wives and husband. We could get up to all sorts of things on the day: rollercoasters, fast foods and other naughtinesses. They each had a similar background in the movement as myself. The driver Jim, who had been having a smoke with his friends outside the coach, climbed back on board. Still no sign of J and J. “Well, We’ll be off then shall we?” Jim growled once somebody had murmured that she didn’t think they were coming. “Hope you brought your cossies girls!”. Well at least he was trying to enter into the spirit of things: he got a few titters in response.

Disloyally I had been banking on the two Js. As we headed out of town away from the steel and coal towards the hills and the source of the heavily polluted River Rother, I wondered regretfully how I had arrived on the trip. Just in case, I had brought a book and some sketching materials. But thinking about it I had no appetite for either sketching or reading. I craned my neck to examine the other passengers. Some of the younger ones were kidding their companions about going in for a dip. Other snatches of conversation concerned close-to-the-knuckle acts seen years ago at the ‘Skeggy’ Embassy Theatre.

I remembered talk of a Butlin’s. Perhaps I might find some entertainment – or something to sketch – after all. Doreen, meanwhile had a conversational approach to coach travel “Oo I love getting out into the hills — look at those cows! They’re lying down. It must be going to rain. D’you want some biscuits now? We’ve got some tea too. Get the thermos out Algie!” Well I couldn’t refuse could I? I was beginning to feel a bit peckish, and so a new friendship was cemented with slightly tacky chocolate biscuits and a thermos-lid-full of tea.

We stayed on board during the pre-ordained “refreshment” stop. Too much effort for the “full of arthritis” Doreen “I can hold on till we get there”. Algie was a recently retired steel worker and so we talked about the series of strikes which had preceded his retirement. “Well the settlement included voluntary redundancies, so I took my chance”. We hardly noticed the rest of the journey “First to see the sea gets an ice cream!” while some of the other passengers chipped in with memories of the strikes. We had drawn alongside the seaside promenade by the time someone spotted an ice cream stand. So we stopped. I bought cornets all round for the group of us who had been chatting.

I disembarked with my new friends. As we walked and rolled along the front we debated which snack bar to stop at. It was warm but windy (to be honest I was thinking “windy but warm” as the wind took the tops off the waves ). The others thought the same.  A shelter opposite one of the snack bars we had singled out stopped the breeze stealing inside my clothes. The talk centred around childhood seaside holidays. Reluctantly, but quite gladly, I was beginning to think how much I was enjoying being part of that elderly crew.