When I first wrote this blog entry, Australia was on fire. A Facebook post which was less than three weeks old stated that disabled protestors were systematically discriminated against at an Extinction Rebellion protest.

In 2019 the Book of the Year had been announced: The Uninhabitable Earth, A Story of the Future by David Wallace-Wells. Greta Thunberg had been named Time Person of the Year. 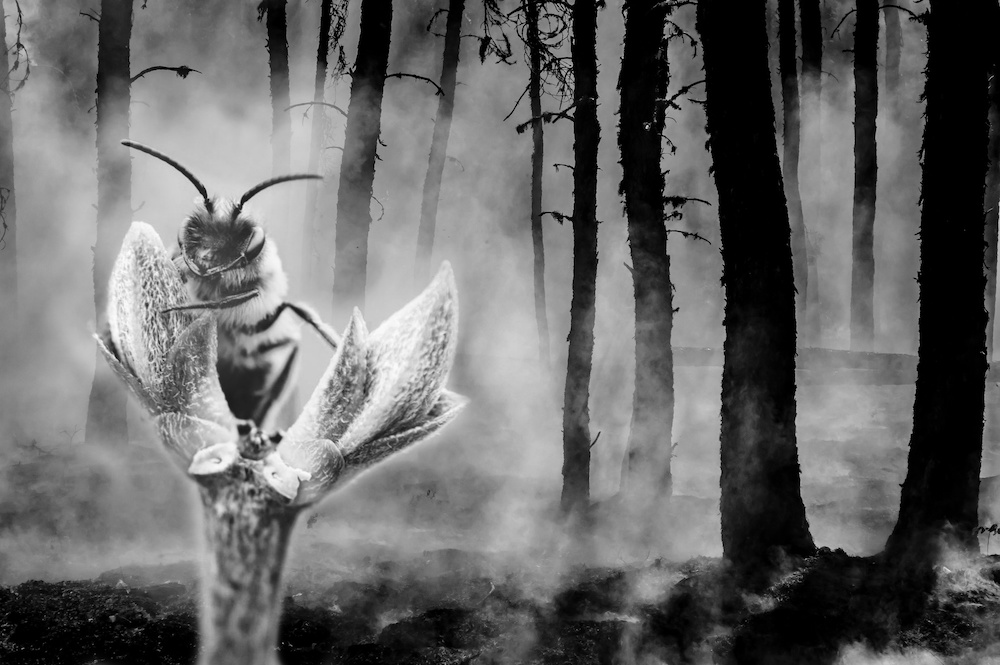 It is still winter, the season of hibernation, so nothing is moving quickly for me. I live in my dressing gown and wake only for meals.

All the same, since December I have been observing the evolution of an idea. In its embryonic stage it was small, simple and undeniably related to my other works. I imagined a bee. Sculpted in clay, cast in resin, coloured to lifelike accuracy. And dead.

My opening gambit in a conversation about our refusal to believe that tomorrow really is coming. To accept that the climate consequences we’ve been warned about will impact us and not some distant generation.

Despite the weight of fatigue I’m struggling under, this idea has grown audaciously. I think it’s safe to say it’s now in its larval phase. My bee has become a swarm.

A landscape littered with bees. A decaying host, no longer cast in resin but crafted from found materials, natural fibres and true-to-life textures. An installation which will decompose and return to the earth. A ticking clock to which we can bear witness.

Why bees? Because, even when I am housebound, I can hear bees buzzing outside my window. I can watch the alliums wobble under their weight and come across their bodies as autumn crisps. There is nothing as distant as the ice caps about the bee. Nothing elusive. The bee is the everyman. My humble, dedicated neighbour.

A six-legged poster child for a delicately balanced ecosystem which provides us with food, clothing and oxygen.

Devon Sculpture Park has offered both inspiration and location for my burgeoning idea. Home to some of Europe’s largest natural hives, it is a site uniquely suited to this project. It’s 100 acres are a centre for rewilding; a place where art and nature not only coexist but commune and become enmeshed.

Now my idea must move into its third phase: metamorphosis. Where the conceptual begins its journey to actual with the coming together – I hope – of many heads. One of Devon Sculpture Park’s ambitions is to become an inclusive hub for artists of all media and this project is an open call for collaboration.

I want this entropic event to provide a glimpse of something larger than the insect itself. Something cyclical. Interdependent. Something which every one of us has the power to influence.

There are many questions to be answered and so many possibilities. How will I engage people both onsite and off, and increase access to this remote Park with all of its latent potential? Which materials will best suit the creation of bees, from the size of a fist to the size of a Ford, which are ephemeral? And, if the decline of the bee is the starting point, where will the journey lead?

Could the swarm be toured? With decomposing bees littering city squares, providing a counterpoint to our hard-edged buildings and fast-paced thoroughfares? Could the swarm, at Devon Sculpture Park, be accompanied by performance art, digital art, spoken word and educational workshops?

My hope is that as the project takes shape it will attract a diverse range of artists, keen to experiment in an environment giddy with bees and abundant with nature as it should be: wild.

My mind is already wandering avenues of structure, interconnectivity, and microbiota. Did you know that bees are positively charged? Pollen is negatively charged. And they attract one another through static electricity.

Well, whilst my mind is bent on exploration, I’m afraid my body is inevitably attracted to the underside of a duvet and the cradle of a pillow. Once again, hibernation calls.

Hi Devon sculpture park has called me too – but as yet have not bee-n able to organise myself a visit as it would probably need someone to push a wheelchair – perps not on a good day!

Yes let’s hear it for the bees! I was surprised to hear that there is a hive (hives?) on the rooftops in central Exeter, somewhere in Princesshay. This could be part of an urban/rural exploration?

I have felt so worried re the bees also- as Ei stein said “ if the bee disappears ….. man ( et all) would have no more than 4 years to live.”
I would make bees out of clay or fabric or whatever . It’s sounds very interesting project ! See you tomorrow!
Ani

Interesting – read your blog last week? But also met you on Sunday – I wondered why your name was familiar – but didn’t know it.
I’d be very interested in collaboration – are you also in XR and SWSA and where are you based?
I am in Cornwall, N of Plymouth. Do you drive? meljoyguy@hotmail.com

Hi everyone – just saw all our comments!