16th Street, Kansas City the late summer heat was hitting 95 degrees. I walked a mile or so down from Fred Whiteread’s house, down past all the Stars and Stripes waving at me and then a line of Croatian flags, giving  me flashbacks of the time in Croatia as a war poet in early ’93.

Finally I was down on Central Street where I was expecting hustles and bustles of every size and colour. It was a walk into a nothing. Not one human being, cat or dog was in sight. Even all forms of transport were just lazed out in the hot sun. I kept stopping to look, left, right, behind me. Nothing.

It was then my autism kicked in and I couldn’t  remember where I was and where i had lost my left and right, stress smells of sickly sweet joss sticks kicked in and everything in the street turned yellow.  I had to sit and relax on the pavement until my head and my left and right along with my smells (smells which are never obvious to anyone else) came back.

There was a feeling of being in a Hollywood scary movie set where you just know something, or someone is going to jump out with a knife or chainsaw. I kept forcing myself to stop thinking scary: it was just my mind playing tricks at least that’s what I kept telling myself. It was all to do with experience, I’ve never really known such lack of moment and noise. Not even in the Balkans war. Even there was always a movement of some kind.

But not on 16th Street, Kansas City. It was just the lack of experience, well let’s be honest – we don’t have many scary movie sets in Wigan. So I turned right towards the Mexican quarters. My conversational Spanish was just about good enough to ask where I was if I met someone, but there was no someone. Still no signs of humanity. Determined to find someone I turned round and walked another mile in  the other way heading towards uptown, Kansas City. It was now feeling freaky like I was somehow stepping into nowhere.

I just need someone and then there he was: an elderly Vietnam Vet. He guessed my accent was English. Trying to find out where;  his words just seemed to slide out of his mouth: “This here is a blue collar area. They’re all working, those who can’t are in their house.”

He gave me directions back to 16th street and back to my home for the next six weeks and the start of my travels down to launch my latest poetry collection at the Albuquerque Festival.

HI Peter, It’s been a long time since I worked with you on BBC Radio Manchester in 1998 and before, I hope you are well, I remember our programmes together with great fondness. Your poetry has become better and better with every new experience, keep going. Harry. 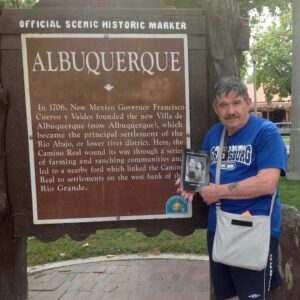 Mad Dogs and Me

Tuesday 24. 3. 09 Like any other morning: Tablets. Coffee. Shower. Breakfast. Boring, until hand written letter with a Kansas City postmark from a Professor Fred Whitehead (retired) Missouri Uni’ Kansas City? Dear Peter Street, I very much enjoyed reading about you in The Guardian Newspaper: James Morrison's: "Accidental Poet" Guardian: 17th December 208. iI would like ...