In the final instalment of a three-part blog diarising their latest trip to the West Bank as part of the Unlimited-funded It Was Paradise project, Rachel Gadsden and Tim Hayton report back on the last four days. Amani, our local disabled producer, has tremendous local contacts, and despite significant mobility restrictions – she is a wheelchair user, in a place where, for the most part, the infrastructure is not yet able to make any concessions – she is extremely active in galvanising the disability community, so over the weekend when we are not working, we are able to deliver not one but two art workshops in Ramallah. The first at the Khan al-Bireh museum, and the second at a community centre in the Al Am’ari refugee camp.

The Khan al-Bireh Museum has an interesting past, situated in the old part of Al Bireh is the Khan (caravan) Al Bireh. During the Ottoman period (1516-1917) the khan was used as a place to stay for travellers who came here to rest and spend a night before continuing on their travels. The place dates back to the Crusader period (12th century) and was founded by the Knights of St. John, who controlled the road from Jerusalem to Sebastia in the area of Nablus. We arrive early to set up the workshop assisted by a fabulous team of volunteers, the Director and our favourite simultaneous interpreter Rawan Manna, who has become a great supporter and friend of the project too. A local television crew arrive to film the workshop, and they also interview each of the artists too.

By 10.30am everyone has arrived and the workshop gets started. It is a large group, but the plan is for all the artists to lead part of the workshop and to share their skills and techniques with the larger group of disabled artists. Ultimately, the workshop produces lots of drawings and paintings too and the atmosphere throughout is both industrious and celebratory. These are significant occasions, not only is the project reuniting many friends but also a time when individuals can come together to be creative. Many of the participants live isolated lives and it is clear from the joy and happiness of the day that everyone gains a huge amount from the workshop.

The second group workshop comes as something of a surprise, as though it was intended for disabled artists of Ramallah, the group that arrives is approximately twenty strong and made up of young adults, with a range of severe physical and learning impairments, who have come not only from Al Am’ari, but Kalandria and Jalzone.

Rachel makes last-minute adjustments to the workshop to accommodate, and the local leader of the camp live-streams the event on his phone.  All the local children who keep running into the centre in the hope of joining the workshop are very pleased with the colouring-books and pencils they are given, so we have to hurry off quickly to a shop to buy some more. We also met 2 brothers Ahmad and Ehab from Al Am’ari Camp at this workshop. Rachel was told that they would just sit and watch the workshop as both of the young men had very severe learning difficulties and they were unable to do anything at all.

These young men remind Rachel why it is always essential to share creativity whenever and wherever it is possible.

The pleasure on the brothers’ faces throughout said it all, and the tears of happiness from mother and sister alike as they saw what they were able to achieve was very moving.

In the evening of the Sunday, we get dressed up and catch a bus to the newly opened Palestine Museum, located out of town, next door to the university in Birzeit. Tonight is the opening of a long-in-the-making exhibition of Palestinian traditional embroidered bridal-wear, dresses and gowns, Labour of Love. The clothing has been collected and donated to the exhibition from many, many different regions and sources, and is a rewarding and colourful show, charting effectively a rich, and profoundly cultured and artistic, Palestinian heritage.  We bump into the director of British Council Palestine, Brendan McSharry, at the show, the artists introduce themselves, and we make the most of the photo opportunity in such colourful surroundings.

This is the final day of the collaborative workshops – and I have no alternative but to stay in bed as I have a severe stomach bug. I have pills for it, so should knock it on the head in a few hours!

It has turned out to be a very constructive residency, and all the groundwork has been laid to create some powerful artwork and accompanying short film. The work will result in a series of high quality paintings.

The artists clear out the Red Crescent workroom; and at lunchtime we say our fond farewells to the collaborative artists, Emy, Mahmoud and Ali.  We have a clear plan for the way forward, and the collaborators, independently, and together, over the summer months will complete what has been started over the recent days; the creation of a comprehensive collection of paintings and other artwork for the autumn Unlimited International exhibition at the South Bank.

This is our last day, we drive out with Israh and Farris for some final locational filming. Our destination is the last of our three locations we investigated at the beginning of the residency; the somewhat windswept common-land overlooking the state-of-the-art hospital and residential developments on the outskirts of Ramallah. Rachel lays down paper and stones in the flower-covered grass to draw and be filmed. We then have three important meetings to complete before an early night in order to catch a very early flight the following morning. We go first to the offices of the Palestinian Young Filmmakers Society to review the footage taken during the residency, and in particular the footage from the day before. We have a debriefing meeting with Caroline and Merna at the British Council offices, which are close by. The support of British Council Palestine has been critical to the success of this project, the circumstances more complicated due to social and political conditions; and we are constantly grateful to receive this ongoing support. And from here we have one final and important visit to make; and so drive with Israh to a house which sits next door to Ramallah hospital; and are led through to the living room, where Hosaam sits, the fourth member of the collaboration, who arrived back from his Saudi pilgrimage just the previous evening. Hosaam is a mouth-painter, a wheelchair user who is paralysed from the neck down. He is full of smiles; he has lost weight and has had a haircut, and so looks very sprightly and healthy right now. The pilgrimage was a great success, his first trip abroad, which he found very interesting and exciting. As we chat, his extended family begin to arrive, one by one, home from work. There are two tiny nieces and their mother, a sister, and then his brother and a cousin, and an uncle, and another sister. Hosaam has brought some holy water back from Saudi (Israh, who is translating, tells us) so we all get a small drink. Very good holy water! Rachel delivers an armful of art materials to Hossam for the work ahead over the coming months, Hossam’s contribution to Unlimited; and since all of the other collaborators have received a digital camera to document, and to create artwork, and since Hossam for obvious reasons simply cannot use a camera, she gives him the money equivalent to spend on whatever he feels he needs in order to continue painting.

We say our goodbyes, and head back to our hotel.

It is time to pack, our plane is at 6am, so the taxi will be arriving at 3am.

And several hours later at Heathrow we are reunited with our beloved laptop!

may God give you happiness
All the respect and appreciation to you, his master Rachel and you Mr. Tim
And how glad I was to visit you
How I longed to spend my days with you
And we hope to meet in the coming times 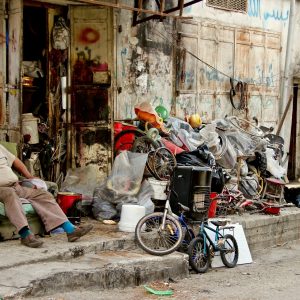 In the second of a three-part blog diarising their latest trip to the West Bank as part of the Unlimited-funded It Was Paradise project, Rachel Gadsden and Tim Hayton report back on the middle four days. Tuesday 13th March. Merna arrives first thing, we are grateful for her constant support as we finalise arrangements for our first ... 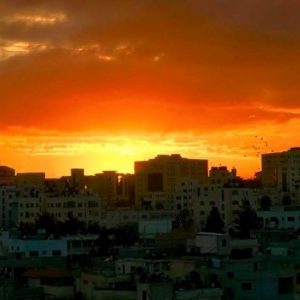 In the first of a three-part blog diarising their latest trip to the West Bank as part of the Unlimited-funded It Was Paradise project, Rachel Gadsden and Tim Hayton report back on the first five days. Thursday 8th March We are here in Ramallah again, in the West Bank of the Occupied Palestinian Territories. We are staying ...

After a good mornings work, Amani again provided a welcome lunchtime diversion, a ‘shwarma picnic’; Amani has been an irreplaceable support in organizing locally, and in making the group’s stay as comfortable and productive as possible. We had planned today to drive to Bethlehem as a group, to visit sites of interest and inspiration for art; ...