On 25th March 2019, I was thinking through the edifying decline of a prime minister and was reminded of the time I was given short shrift for not giving Theresa May time to speak at a Rights Now Rally in Trafalgar Square. Some observers at the time felt that a minister, if treated politely, would help make things change. Well. I suppose in many unfortunate ways they were right. Sadly my poetic prophesy came true too. 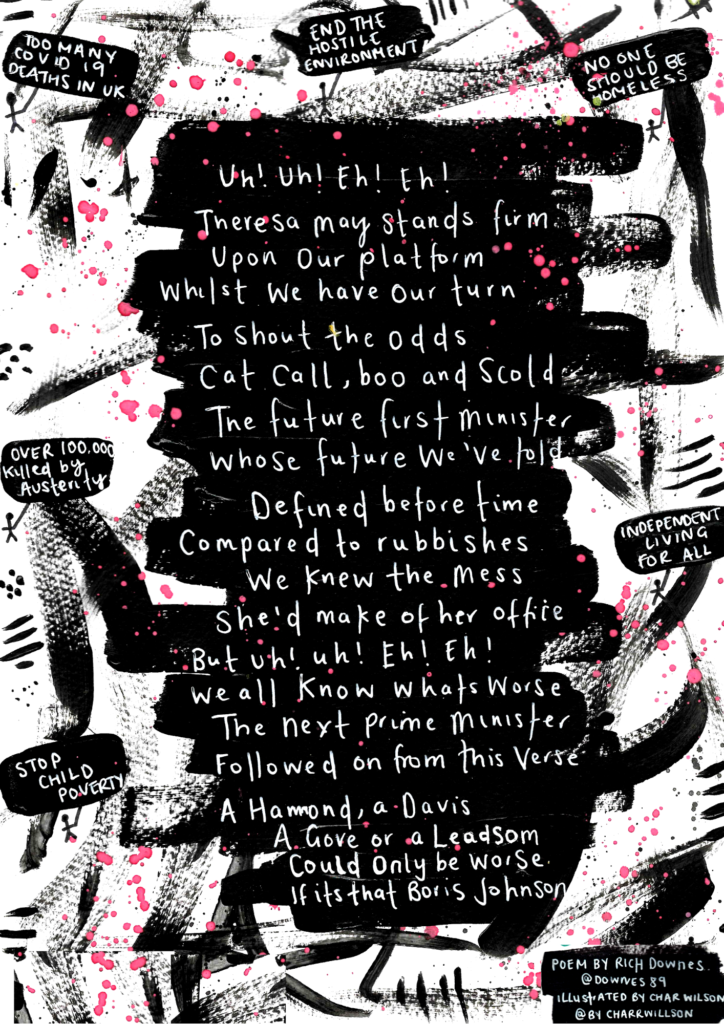 Illustration by Charlet Wilson who says; “This poem made me think about all the shortcomings of our current government.It filled me with anger for those deeply affected by the policies, words and decision making of the conservatives. For me compassion for others seems so black and white. However, I know that it is not. Our country’s politics are messy and chaotic and this is shown in the brush strokes. I worry for our future. I do not want any more blood spilled and this is what the red splashes signify. It also made me want to speak up and make change happen and that is why there are little people with protest placards”.

642 Ems and Eh’s Uh! Uh! Uh! Eh! Eh!
Theresa May stands firm
Upon our platform
Whilst we have our turn

But uh! Uh! Eh! Eh!
We all know what’s worse
The next prime minister
Followed on from this verse.

A Hammond, a Davis
A Gove or a Leadsom
Could only be worse
If its that Boris Johnson

Rich Downes is a profit – he saw this mess coming – like a lot of us i guess but he wrote it down and thats the difference – thats an artist.