This poem was born on a march and rally to save the NHS. A woman held aloft a placard reading “Kill Cuts! Cuts Kill!”. I was going to use a photograph of that to illustrate this poem. I might tag it on to the end of this.

On leaving the rally and walking up Whitehall I saw some people dressed as skeletons and just happened to take their photograph too. Much Later I was manipulating the skeletons for my gallery at Outside In. I noticed it was coming up time to blog this poem and sent it and the skeletons to my illustrator friend Charlet Wilson to see what she could come up with. I think you’ll agree she came up with a great translation for the poem. 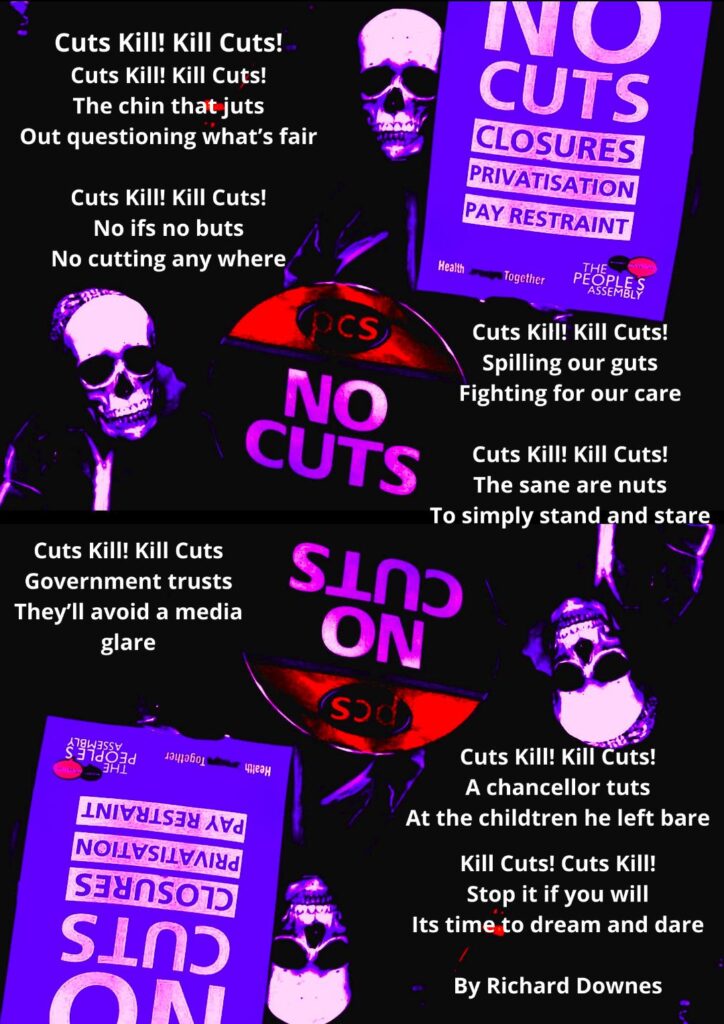 Illustration Charlet Wilson based on a photograph by Richard Downes

Cuts Kill! Kill Cuts!
No ifs no buts
No cutting any where

Cuts Kill! Kill Cuts!
The sane are nuts
To simply stand and stare

Cuts Kill! Kill Cuts!
A chancellor tuts
At the childtren he left bare

Kill Cuts! Cuts Kill!
Stop it if you will
Its time to dream and dare

I have recently resigned from my role in Adult Social Care – the NHS has had it bad but Social Care worse. What makes me sad is that Health pulled rank and many many old people got sacrificed, my mother and my husbands mother included both having died since this Covid 19 catastrophe. I couldn’t be apart of it anymore.