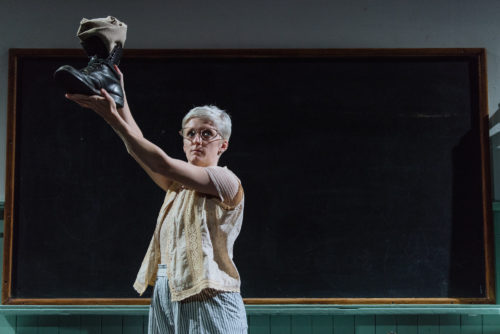 We are seated inside a wooden oculus, the dissection room at Summerhall. It is festival season. The tiered wooded seating is dark and curved for the purpose of peering down into a body-shaped well, where bodies where opened up for anatomical examination. Artist Brian Catling has written a new play returning to an old theme – The Resurrection of Bobby Awl – one of Edinburgh’s forgotten sons, who was dissected here.

Catling found a plaster bust of Robert Kirkwood in an attic with a host of other luminaries, long-abandoned to the shadows. He also found a skull with Kirkwood’s full name written in the eye sockets. The glass dome of the dissection room is papered with old black sheeting that leaks beads of sunlight round their tattered edges, drawing a mock constellation – a space that is part dissection theatre and part sham-planetarium. Catling has explored this territory in performance and poetry: the forgotten, the cosmic, the sublime violence and humour of it all. This is his first play, featuring a cast of disabled and non-disabled female actors who take turns to teach us ignorant audience members about Kirkwood’s life, performing a gentle act of resurrection that stays with you as you ease down the road – the violence of a life and its ending is all true, the narrator is at pains to clarify.

A woman enters the dissection pit carrying a black leather boot – Bobby’s boot. She cradles it i her arms and at her bosom, then raises it aloft in a surreal act of triumphalism. Owing to his deformity, the true story goes, Bobby was placed upright in the boot as a baby, his mother not wishing to catch lice from his writhing and biting mouth. From there the infant was demoted to the cats cradle, where he slept amidst scratches and fleas. A smart yet casually dressed lady with the formal air of a trendy young headteacher tilts a circular table forward and uses it as a blackboard – a sculptural equivalent of a chalk moon upon which to spell out words, dates and images conjured by the play – information as spoon-fed to primary school children in a victorian pantry, perhaps. Shadows cast by the actors, the table and the cast heads of Kirkwood form an at times shockingly vivid planetary diorama of the three female actors (graces) simple yet profoundly caring gestures. Bobby’s resurrection is an act of maternal love.

Robert Kirkwood graduated from the cats-cradle to the streets, earning his nickname Bobby Awl because he carried an auld wooden tool around with him. He was mocked and could not speak, laugh or cry, but emitted a terrible shriek somewhere between a hiss and a howl, practicing in the seclusion of the dormant volcano behind Arthur’s Seat. On one occasion he was verbally abused by a drunken pair who he struck back at with malice. Catling explores the creation and the complexity of the monstrous with relation to disability, suggesting that the violent social environment and the lack of care with which Kirkwood was raised is causally related to the violence that Bobby practiced later in life. Disability theorist Henri Stiker argued that disabled people represent ‘a tear in the social fabric’ – a reminder to the body politic and its associated rituals of purification of the uncanny familiarity of deformity and exile. The order of things is disrupted by people who do not, who cannot and who will not conform.

Brian’s play is not a pity-party though; it is Bobby that did the tearing, and it is for our moon-cast memories to glimmer, soften and repair the damage. As if to emphasise this point: at times during the play a concerned looking man in the audience would stand up and say something like ‘Poor man!’, eliciting a bemused look of consternation from the rudely interrupted narrators. Passages of a book – one of just three about Kirkwood’s life – are read aloud in Scottish, including by an actor who cannot ‘do’ a Scottish accent. The moon-table is wheeled about and turned flat. A sack is produced and vegetables taken out to describe different anatomical structures – the windpipe is a stick of celery, the kidney a radish… A history of grave robbing and then murder in the supply of anatomical specimens lends a further twist. It would be tempting to ruin the ending and other poetic and sculptural details of the play, it is so good, and to describe how the choral and operatic music climbs the curved walls of the oculus, but I will bury the urge for now.

The Resurrection of Bobby Awl is on at Summerhall, Dissection Theatre, Edinburgh until 25th August 2019. Contact the box office for tickets and to gain information about accessibility. Click on this link for information about the performance times and tickets

Postscript
Walking around Edinburgh and indeed any city in the UK these days it is impossible not to notice the level of homelessness. There is a couple living in a tent next to the main festival drag. Tickets for shows are £14, with concessions at £12, making it unaffordable for people like myself who are on Universal Credit. Festivals should be for everyone. Austerity has fallen hardest on disabled people, with many having died as a direct result of benefits sanctions and cuts, either from starvation or suicide.

This short text is dedicated to the memory Paul Reekie (1962 – 2010) a Scottish poet who committed suicide after having had all of his ‘benefits’ stopped.