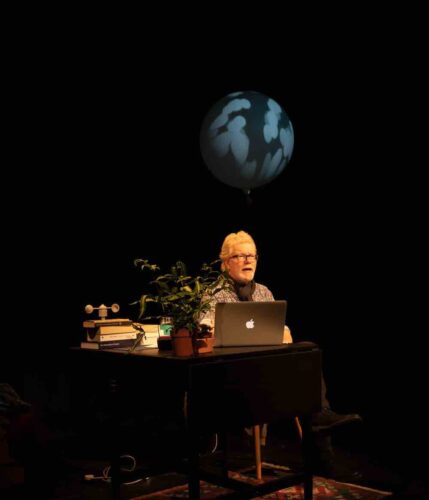 I was Naked, Smelling of Rain – Aidan Moesby

For the first time in its history, DaDaFest conducted its festival completely online. Steph Niciu reviews an event from day five of DaDaFest’s Translations – Aidan Moesby’s premiere event for I Was Naked, Smelling of Rain, which took place over Zoom on 1 December.

Before we saw Moesby’s piece, there was a conversation with Aidan and producer Holly Shuttleworth. This offered an insight into how weather and wellbeing inspire his work and there were discussions about loneliness, self-care and compassion.

I Was Naked, Smelling of Rain was a work initially launched in Bristol last April. It was a pre-covid time, the audience were able to experience the piece differently. For DaDaFest, it was a recording accessed via a YouTube link. Despite the difference in the way the piece was presented, it was powerful and intense.

Aidan is not an actor, but as he performed his monologue, he was compelling to watch. He presented his own autobiographical experience of mental health and its interconnection with the weather, as well as references to key historical and scientific moments. The production was very minimal. It focused the attention on Aidan and that worked really well. There was voiceover that came in at certain points while he was talking, and this was a great way to demonstrate the power and disturbance of his own thoughts.

Aidan’s aversion to supermarkets really stood out. He described them as contributing to the loneliness, obesity, and plastic epidemics. For him, they are overwhelming and too stimulating. This got me thinking about how a supermarket can resemble the mind. Much like a supermarket, your mind can be overwhelmed, and if you don’t take appropriate action, will lead to your mental health being severely affected. For the artist, the importance of learning how to manage mental health effectively became a key thread that ran throughout the piece.

Aidan’s exploration of loneliness was significant in the piece. The relationship he has with it but also our own relationship with it too. In a blog for DAO, The View is Different From Here, he poses the question ‘Is loneliness manifested from within or is it something that is manifested, externally, as if given to us?’ In I Was Naked… Moesby says ‘sometimes I feel exquisitely and painfully lonely’ – loneliness expressed as a neediness, a longing to be a part of something.

He talked about feeling most lonely when he’s seeing a play at the theatre. He referenced that while he was at his house in Northumberland during the winter, he was alone but he didn’t feel lonely. One of the reasons why was his connection with the snow. The weather can be such a positive force in your life and to your mind. Different types of weather can speak to a person more than others.

Aidan credits the weather for really helping with his mental health as it needs us to be present. He said that being present is an important part of keeping ourselves mentally healthy and well. He also talked about social media as contributing to loneliness. We live in a society now where loneliness can also manifest itself externally when we use social media platforms such as Facebook and Twitter.

What came out of Moesby’s exploration of loneliness was that there is no straightforward answer, but what is clear is our own personal responsibility to address it as much as we can, both internally and externally, so our psychological weather is as balanced as it can be.

After the film, audience members took part in a short Q&A with Aidan and Holly. The film gave us so much to think about that going straight into this didn’t allow much time for us to process what we had seen. Also, while the conversation at the beginning was insightful, there needed to be more moderation during it, so there was more of a balance between the two speakers and their contributions.

This was an ambitious premiere event and even though it was done through zoom, I still felt really connected to it. The event was programmed with support from St Helens Arts Service and St Helens Libraries. Before the event ended, it was announced that the piece would be part of a longer-term project with St Helen’s Council, so it will be interesting to see what Aidan develops as a result of that.

Ultimately, I Was Naked, Smelling of Rain was a poignant and personal reflection, giving us permission and space to think about our own mental health, which now more than ever is something we all need to be shining a light on.

I Was Naked, Smelling of Rain will show as a free performance as part of the Unlimited Festival at the Southbank Centre from 14 – 16 January 2021.

For further information about the Was Naked, Smelling of Rain project you can read Trish Wheatley’s response on her DAO blog