Just over a week to go before Outsider Art Association Conference 2018, Outside In, Pallant House Gallery, May 4th-6th, Barry Finan and Rosanne Robertson share their reflections, ideas and creative process as they prepare for their live version of their collaborative film ‘SCRRIPPT’ to present at the event. Rosanne: When asked to present at the Outsider Art Association Conference 2018 with Venture Arts Barry and I met up to talk about an idea I had about revisiting our project SCRRIPTT and developing it into a live performance. As artists our voices are in our work- and rather than talk about our work we decided to perform our work together. We decided on the idea of SCRRIPTT (Live).

SCRRIPTT was developed from a studio project during Venture Arts’ OutsiderXchangeS project in which we worked with writing, reading, sound recording and making performance for camera together. Rosanne: For the EOA Conference- we have been revisiting SCRRIPTT and developing it into a live performance for the conference audience with projected visuals. We have been working to re edit material from the SCRRIPTT video and produce new visuals from automatic drawings I have made from a script for a play that Barry outlined during our recent studio sessions together. We have practiced with some new experimentation with sound and reading to each other from new writing.

For me the act of reading to each other from Barry’s work has helped define our relationship as two artists together in the same space- communicating and sharing space, materials and ways of working. It has been a way to understand more about Barry’s work past the initial impact of the form. In our conversations Barry has explained to me that he is a writer and his dream would be to be a writer and an actor.

This has made the performance of Barry’s work even more important- he must write but he also has a great drive to present his work- to enact it and to find the best platform for it. His output of choice would be broadcasting- moving pictures, televisions, writing, script writing, acting and a paid acting job. I am inspired by the term Barry uses ‘Jumping off television pictures’ which I see as bringing things to life, which we hope to do by ‘going live’. Rosanne: I have found it important during this process to communicate with Barry my own ambitions- my chosen medium of visual, sound and live art. As a collaborating artist I am not an interpreter of Barry’s voice and nor is he of mine.  I have described how I am an artist and I want to be an even better artist- a successful artist with shows all around the world! As a person with an often-disabling anxiety disorder my voice can be lost and so my visual language is my voice. I want to make art that questions and challenges and is part of the conversation- part of the art world and able to be widely accessed. I share Barry’s ambition of being able to independent and rely on well-paid work that I enjoy. Like Barry I am ambitious, and I am working out how to remove barriers to allow me to do what I feel strongly about doing. I feel excited that Barry and I can achieve part of this ambition together.

Further Reading:
“The very nature of the outsider is questioned”: OutsiderXchanges — Reviewed by Double Negative
“I recently attended one of the best art events I’ve been to in a very long time”: OutsiderXchangeS Overview by Corridor 8
OutsiderXchangeS at The Baltic Centre for Contemporary Art: Review by Disability Arts Online 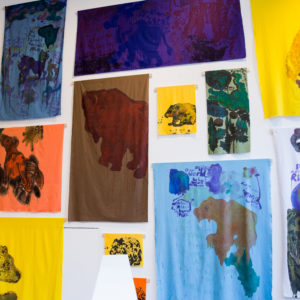 Thumbs Up, by Castlefield Gallery and Venture Arts is an exhibition by artists Michael Beard, Frances Disley, Harry Meadley, and Leslie Thompson. Responding to the physical spaces of the gallery the artists have developed the scale, materials, and methods of their work over a seven-month development period during which they worked alongside each other using ... 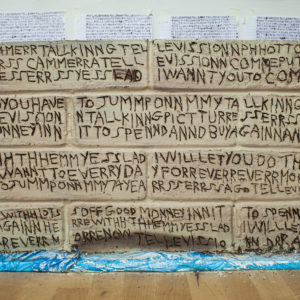 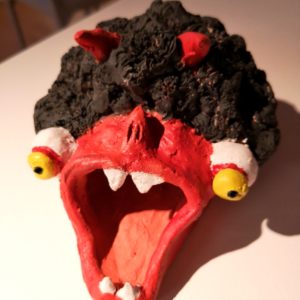 Conversations Series II: Other Transmissions is a project led by Venture Arts in partnership with Castlefield Gallery and the Whitworth, the second in Venture Arts’ four-part Conversations Series. An exhibition of the work from this collaborative residency is on show at Artlink in Hull from 30th March to 22nd June. Review by Gill Crawshaw This is ...