Artist and DPAC (Disabled People Against Cuts) activist, Vince Laws, has produced a series of ‘DWP Deaths Make Me Sick’ shrouds, 14 of which will be on display at Cambridge Junction on Friday 26 & Saturday 27 April 2019.

The ‘DWP Deaths Make Me Sick’ shrouds describe the circumstances of death of named people dealing with the DWP, and give more information about the current hostile environment for disabled people. I want to get them seen. I feel the need to carry on screaming about the human rights abuses of this current Tory government. The shrouds are actually quite painful to make. I take breaks. They are very sad. But also very powerful because they are the truth.

The 6 shrouds in this photo read from left to right:

Elaine Morrall
severely depressed, anorexic mother of 4
died alone, one afternoon, in a freezing flat
after a Universal Credit cut.
Elaine was told being in Intensive Care
was not sufficient reason for
failing to attend a UC interview.
Stop U.C. Alliance
www.suca.org.uk

John Walker
Saddled with debt due to the bedroom tax.
John took his own life.
‘Dead People Don’t Claim.’

Jodey Whiting
Missed a Work Capability Assessment while very ill.
Disability Benefits stopped. She took her own life.
Sign the petition for an Independent Inquiry
into Deaths linked to the DWP.
DWP Deaths Make Me Sick

Victoria Smith
Suffered agoraphobia +
fibromyalgia, in constant pain.
PIP re-assessed by Capita.
“A pack of lies,” said her mother.
Appeal turned down.
Condition got worse.
admitted to hospital,
died of a brain haemorrhage.
A week later a Tribunal decided
she was eligible for PIP.
Dead People Don’t Claim

The ‘DWP Deaths Make Me Sick’ shrouds were the backdrop to a live performance put on by Laws and 13 Norfolk based disability rights activists at Norwich Arts Centre in September 2018. A Very Queer Nazi Faust was commissioned and supported by Unlimited, celebrating the work of disabled artists, with funding from Spirit of 2012.

In the play, poet John Faust is suicidal. His benefits have been stopped without warning, the bailiffs are due to evict him, his dog is in the vets dying, his car needs a new clutch, and he can’t finish his poetic masterpiece while the voices inside his head tormenting him. In despair, he throws himself off Beeston Bump, Norfolk’s highest peak, clutching ‘The Tragic True Life & Deserved Death of a Benefit Scrounger by Himself’, but Lucifer won’t let John drown because she loves his work and wants a bigger part. You can listen to the podcast on Soundcloud

Anyone wishing to display some shrouds, get in touch with Vince Laws direct via vincelaws@gmail.com.

Vince Laws’ DWP Deaths Make Me Sick can be seen at Cambridge Junction on 26th & 27th April as part of I’m Here, Where Are You?, a new arts festival celebrating disabled artists across theatre, comedy, dance and visual art. For more information, please click on this link to visit the website. 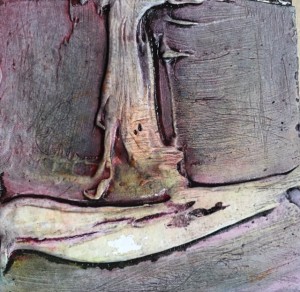 Hi Vince, your work is beautiful, hard hitting and haunting, keep up the good work, I hope one day we will be in a better position, where there will be no more deaths over DWP for you to create art but unfortunately I can’t see anything changing for a while.
I’ve been making work out of my own appeal letters after being awarded, DLA for life the government changed the rules and now every two years I have to re apply just in case I recover from a degenerative disorder I’ve had my entire life.
Good luck 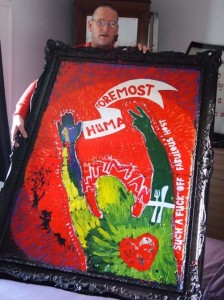 Hi Fae, only just seen your comment, thanks. I intend to stop making them as soon as the Tories are out and the system changes. Not holding my breath but working towards that. Shrouds are going to Nottingham next month for 3 week art show. I like that I can get them seen on gallery walls and at street protests.
I’d love to see work you’ve made out of DWP letters. I’ve just been denied PIP on nonsensical grounds. Carry on Screaming! (vincelaws@gmail.com)

Hi Vince I have been pointed to you by Kristina Veasey who I know from Womad.I was the Shape Open winner for my dolls.And our group volunteer in a lille gallery at Bromham Mill beds.I am putting on a social justice exhibition and artivism exhibition.As a chance for regenerative actions for saddened people.Kristina said you may lend out your shroud for a tour at Bromham Mill.Could you contact me.