Christopher Sacre’s epiphany as an artist may have arrived in an unexpected form – but since discovering a happy marriage between condoms and plaster since October 2010, he has never looked back.  The resulting work, ‘See what this man gave birth to after using 2000 condoms in 22 days’, is an extraordinary installation of 2000 of his plaster ‘babies’.

The creations are made by pouring liquid plaster into a condom, which is knotted at one end and left for an hour.  Sacre then peels away the latex and the emergent form is left to dry for up to two weeks, when he lops off the knotted end, giving it a flat base on which to stand.  Each ‘baby’ is unique: Sacre lovingly details their birth date and thus they become part of the ‘Adoption’ series. 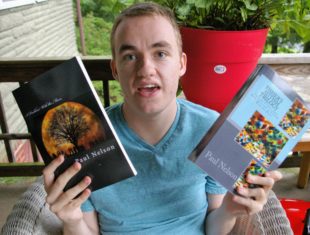