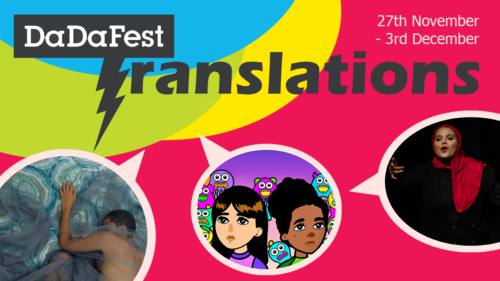 As a result, DaDaFest will be encouraging donations and a new film has been made to showcase DaDaFest’s life changing work.

This year’s festival theme is Translations which continues a 12 year journey for the organisation using the prefix ’trans’, used for its Latin meaning, ‘through,’ with its implications of change and moving forward.

We began that journey in 2012 and the festivals since then have explored the ideas associated with:

The programme is made up of new artworks across a range of artforms, and includes a lot of firsts for DaDaFest: we’ve commissioned a podcast series, a board game, and even a fitness video (albeit with a disability arts twist).

The theme of ‘Translations’ is approached in all kinds of ways – Amina Atiq explores what it means to be ‘Yemeni-Scouse’, Hana Madness and Alexis Maxwell’s animation reveals UK-Indonesian differences and commonalities… and elsewhere Dominic G will be sharing his manifesto for a fictional nation of weasels!

Other artists featured include Tammy Reynolds who will be examining dwarfism and control of public gaze, Deaf Explorer’s cross-artform collective, Ngozi Ugochukwa presenting an exhibition around body scars, and many many more.

The festival will include BSL interpreted, Audio Described, Captioned events, and there will be easy read versions available, all to improve access.

The full DaDaFest International programme will include artist talks, live Q&As and more, still to be announced.

Access:
The festival will include BSL interpreted, Audio Described, Captioned events, and there will be easy read versions available