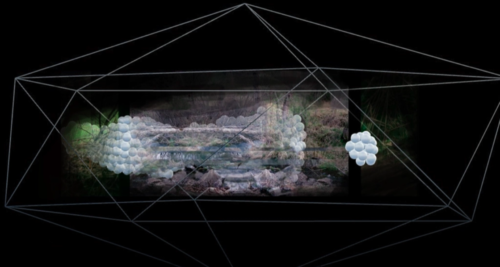 The Koppel Project is pleased to announce the opening of “Resonance Touches”, an exhibition featuring Isabel Bonafé and Lara Geary following the conclusion of their residency at The Koppel Project Hive Gallery. It will open on 18 May and present these two artists’ work and their respective explorations of how matter’s vibrations manifest through sound and light waves.

Inspired by the theory of a holographic universe, Isabel’s installation seeks to reveal the bond between tactile matter and immateriality, intertwining the randomness of the universe and the mechanics of (digital) memory. Data retrieved from a broken hard drive, known as data remanence, feeds her original algorithm, Quark 2.0, which attempts to regenerate, ultimately unsuccessfully, a landscape from corrupted files. In its continuous effort, it instead perpetually unfolds and implodes in a futile search.

In this way, she seeks to create a gateway to a collapsed digital space, where the presence of beings awakens Quark 2.0, and a soundscape is formed from the electromagnetic activity of the hard drive as it tries to read its contents.

Lara has explored being, language and voice and presents a site-responsive installation. She is working with sound, sculpture, generative visuals, writing and a sonic recurrent neural network—trained on her voice. The bod(i)es Lara has created echo and flutter a multiplicity, imagined, shifting x, y z registers—nowhere yet somewhere, flowing the surface(s), defying the bounds of this space. Voice-like–sounds make utterances of non-sense without meaning—yet familiar. “The hum of life slips through the gap between bodies. I speculate, now, how they must have arrived to then—imagining tiny particles silently passing through the drum of my ear without conscious detection. To which they go of where they came, I know not. Attention to them began, I think, as they attempted to leave—possibly the same way they arrived, they fail in their efforts. Maybe their mass increased in encounters, and now they bang the drum demanding to leave.”

The residency opens by appointment from the 29th of April 2021 and it will run for two weeks, culminating in an exhibition opening on the 18th May 2021. More details and live events will be announced soon.

Admissions: Due to UK Government guidelines we are enforcing a reduced guest list capacity. You must RSVP to one of the slots to join us at the Private View, unfortunately we will not be accepting any drop-ins. In between each slot we will be sterilising surfaces.