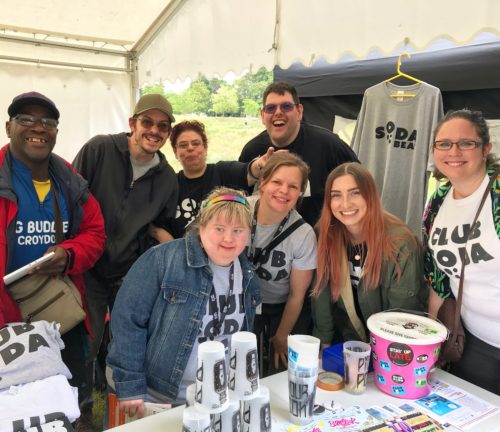 Club Soda are a group of adults with learning disabilities creating exciting social and creative opportunities in Croydon for ourselves and for other people. We were the first to provide accessible club nights in mainstream Croydon venues. We produce new and original art, by collaborating with musicians, DJs, actors, film-makers, fine artists, photographers and many others. We support and encourage learning disabled artists. We help to promote a better understanding of people with learning disabilities. We’re working towards a more inclusive, accessible, and fairer Croydon.

We do this through various projects, including weekly music workshops, live music events and Gig Buddies Croydon.

What is Gig Buddies Croydon?

In 2017 Club Soda was one of 10 organisations across the UK chosen by the charity, Stay Up
Late, to launch local Gig Buddies projects. We became the first such organisation in London
to run this pioneering project.

Stay Up Late was started as a campaign by the band Heavy Load in 2006. Heavy Load were
concerned at the amount of people with learning disabilities missing out on gigs due to their
support staff working inflexible shift patterns. Gig Buddies was created as a solution.

Gig Buddies is about empowering people with learning disabilities to access their local
cultural scene, building friendships and giving people choice about the way they live their
lives. Through monthly socials at different cultural venues and matching pairs of buddies,
Gig Buddies creates a community of people bringing about social change.

Since the launch of Gig Buddies Croydon in April 2019 we have:
● Engaged 30 volunteers and participants onto the project
● Matched 5 pairs of buddies
● Facilitated 4 volunteer training sessions
● Held 16 social events in local venues
● Had over 100 people attend across all social events
● Promoted Gig Buddies at 2 local festivals
● Presented at 4 local community groups
● Developed partnerships with over 5 local organisations and venues

To apply please complete an application form below and a 60 second video to tell us why you’d be great at the job. Send to cherilyn@gigbuddiescroydon.co.uk by the deadline. (Details of how to send the video to us are in the application form)

Contact Chez (cherilyn@gigbuddiescroydon.co.uk) for more details about the role.

Send us your listing