Multi-award-winning choreographer Yasmeen Godder will premiere her new work Face In this Autumn, commissioned by Candoco Dance Company and performed by their company of disabled and non-disabled dancers. Face In is the final commission from Stine Nilsen and Pedro Machado before they step down as Artistic Co-Directors of Candoco, as announced in January. “Yasmeen Godder is an artist that we have been wanting to work with for many years.  Her works often involve a mix of dynamic and intense movements interspersed with detailed gestures and playful expressions. This mix creates a very visceral effect, a feeling of a 3D experience of the work.

When we first saw Yasmeen’s work we felt that it had an affinity with what we were interested in exploring with the Candoco dancers, to push beyond known ways of expressing ourselves, of interacting and physically relating to each other.”

The new work is paired with performances from the Candoco repertoire: Beheld at The Lowry in Manchester for Face In’s UK premiere (24 Oct), and with Set and Reset/Reset at Italian dance festivals in September. Alexander Whitley’s Beheld features visually-striking powerful duets and breath-taking ensemble dancing set to music by Nils Frahm, while Set and Reset/Reset is Abigail Yager’s acclaimed 2016 restaging of Trisha Brown’s beloved postmodern 1983 Set and Reset. In addition to creating for her company, Godder has been commissioned by the Batsheva Dance Company, Matanicola Dance Company, Theater Freiburg, and more. All of her works have been presented in Israel and at numerous venues throughout the world including: Lincoln Center Festival, Sydney Opera House, Montpellier Danse, Hebbel Am Ufer, The Place and Tokyo Festival, among others

Godder is the recipient of numerous awards including a 2001 New York Dance and Performance “Bessie” Award and the prestigious Michael Landau Prize for the Performing Arts from the Tel Aviv Municipality. Most recently Godder received the Israeli Ministry of Culture Award for “Best Creation” in 2015 for her work CLIMAX.

Candoco, the leading company of disabled and non-disabled dancers celebrated its 25th anniversary in 2016 with a programme of performances, special events, participation work and international touring. Founded in 1991 by Celeste Dandeker and Adam Benjamin, Candoco quickly grew into the first professional dance company of disabled and non-disabled artists in the UK. Candoco’s current Artistic Co-Directors Stine Nilsen and Pedro Machado were appointed as Celeste’s successors in 2007, having danced with the company for seven and nine years respectively.

Nilsen and Machado have taken Candoco from the Bird’s Nest in Beijing to the Olympic Stadium in London, performing at the handover ceremonies in 2008 and returning, alongside Coldplay, at the Paralympic Closing in 2012 and have commissioned works for the company from leading choreographers including Emanuel Gat, Rachid Ouramdane, Wendy Houstoun and Javier de Frutos. 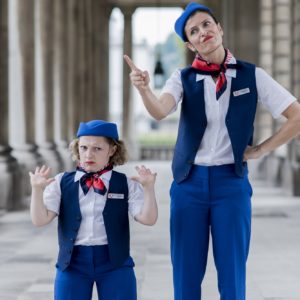 As part of A Bit Of A Do, a 3-day mini-festival of work by disabled artists organised by Drunken Chorus at London's Stanley Halls, Candoco Dance Company performed its new duet A Graceful Act of Stupidity. Using movement, spoken word and British Sign Language it follows the journey of two flight attendants. Review by Alexandrina ... 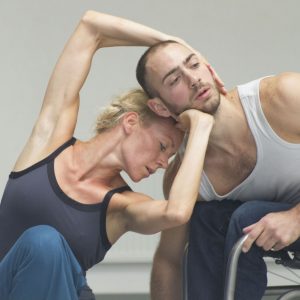 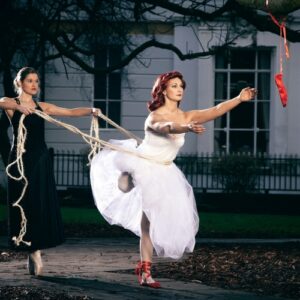 From Gene Kelly singing in the rain to that white suit in Saturday Night Fever, 11 Million Reasons to Dance sees Deaf and disabled dancers re-imagining iconic dance scenes across cinematic history. Jade French caught a performance of it on 29 November at the Brindley, Liverpool as part of DaDaFest International 2016. Commissioned by People Dancing ...