It is with the deepest sorrow that we announce the passing of the world-renowned dancer, actor, and advocate for equal opportunities for disabled people in society and the performing arts, David Toole OBE. David passed away at St James University Hospital in Leeds on Friday 16 October. He was 56. 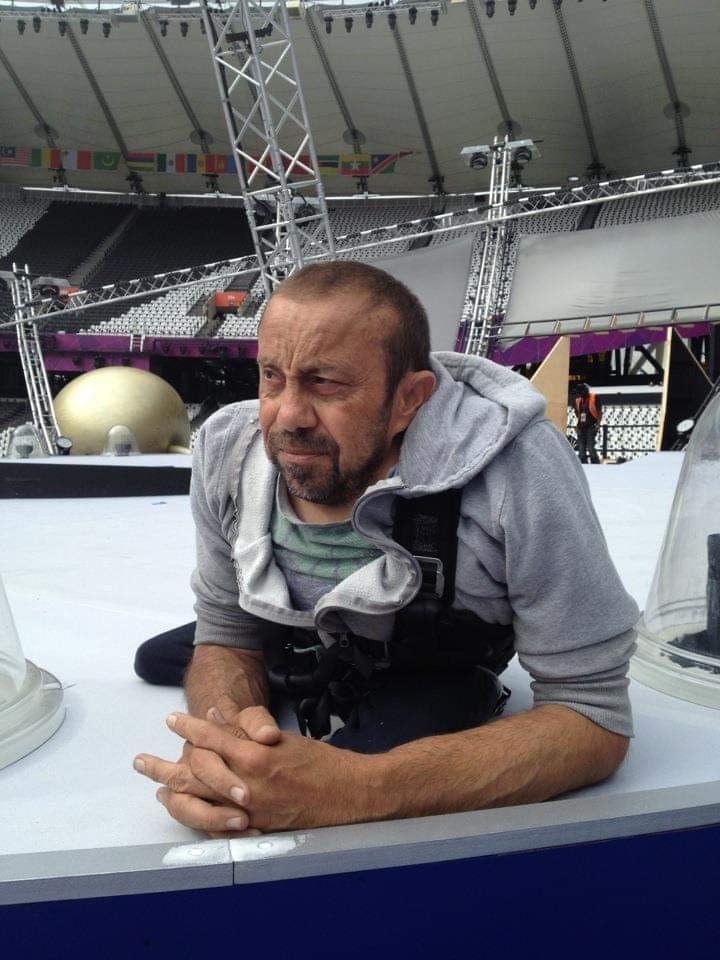 Born in Leeds in 1964, David was one of the founding members of Candoco Dance Company in the early 90s when they made an impact as a company of disabled and non-disabled professional dancers. In 1995, David had his first taste of theatre when he played the part of Puck in Benjamin Britten’s opera of A Midsummer Night’s Dream. This was followed a year later with an appearance in the Sally Potter film The Tango Lesson, playing the part of the Fashion Designer.

David performed with Graeae Theatre Company in 2000 and 2001, playing the parts of Edgar in The Fall of the House of Usher and Deflores in The Changeling, respectively. In the summer of 2000, he worked with DV8, creating, and performing the piece The Cost of Living for the Sydney Arts Festival prior to the 2000 Olympics. This show was revived in 2003 and also led to the film version of the show being made that year. David made headlines in 2012 as a soloist at the Opening Ceremony for the London 2012 Paralympic Games. He went on to perform with prominent companies such as the Royal Shakespeare Company, DV8, and the Leeds based company Slung Low.

For the past 10 years David worked with Stopgap Dance Company. As David said in a 2012 interview “I do have moments when I wonder, how did this dodgy postman from Leeds get to do all this?”

Throughout his career, David advocated for equal opportunities for disabled people in society and in the performing arts, providing mentoring support to many individuals who sought positive change.

In 2019 David was awarded an OBE for services to dance and for disabled people in recognition of his contribution to making Britain a world leader in disability arts.

Jenny Sealey artistic director of Graeae and co-artistic director of the London 2012 Paralympics Opening Ceremony: “Dave was so many things, our darling wonderful, grumpy, opinionated, glorious, silly, funny, kind, sexy, loving, and wise friend. The most unique and left-field man ever and funny beyond words. And of course, an extraordinary performer and a unique brilliant dancer. But above all, to all of us in Graeae, he was a dear friend and a cherished collaborator. We hope he is safe and pain free wherever he is”.

Alan Lane artistic director of Slung Low and friend said: ”We are all so sad to hear of Dave Toole’s passing. It was such a privilege to make so many adventures with him. He had an extraordinary talent; he was a brilliant actor and the very finest dancer we’ve ever seen”.

Colin Hambrook editor of Disability Arts Online recalls: “My first memory of seeing Dave Toole perform was with DV8 – but it is his work with Stopgap Dance Company that will remain most in my mind. He was captivating to watch on stage and brought something unique and compelling to dance. The 2015 Edinburgh Fringe saw Stopgap perform the cinematic Artificial Things with its haunting, surreal humour. Dave cast an unforgettable image confined to a glass box on stage and it was a terrific accolade to see the filmed version of this piece make it on the GCSE Dance syllabus. Lucy Bennett devised The Enormous Room with Dave in mind as a central father figure. He brought his acting skills to bear in this story of grief in a looking-glass world. Dave’s passing is a great loss to Disability Arts and to the world of Dance as a whole”.

A Tribute from Lloyd Newson, Artistic Director of DV8

David Toole was a truly remarkable performer and person. He personified the concept of ‘differently able’, or perhaps more appropriately, ‘exceptionally able’. David made you marvel at what a body, his body, could say and do.

He was funny, irreverent, droll and direct with an openness of spirit that meant he was up for anything – and that’s what made him such a joy to work with.  He had no time for pretension or middle class waft.

On stage he was magnetic and his attitude towards life won the admiration of all of us who worked with him on The Cost of Living. I remember him telling me the story of when he’d been working for the Post Office and he came home and said to his mother: “Mum I want to be dancer”. She replied: “Can I just remind you, you don’t have any legs”. That wasn’t an obstacle for David….. and he became one of the most outstanding and alluring dancers I’ve ever witnessed on stage. It was an honour to have worked with such a courageous and talented man.

A number of personal tributes have been posted online from some of the key artists / companies that Dave Toole worked with, including:

A statement from Jenny Sealey and the team at Graeae Theatre