A major exhibition presented by Outside In, an award-winning national charity which provides a platform for artists facing barriers to the art world, takes place at Piano Nobile Gallery, at London’s Kings Place until  1 January 2020. The exhibition features of over 80 works by 80 artists, exploring the theme of ‘Environments’ – from the personal to the political and from landscapes to alternative worlds. A judging panel of internationally renowned artists – including Grayson Perry, Cathie Pilkington and Robert Travers – has announced three prize winners from the exhibiting pieces. 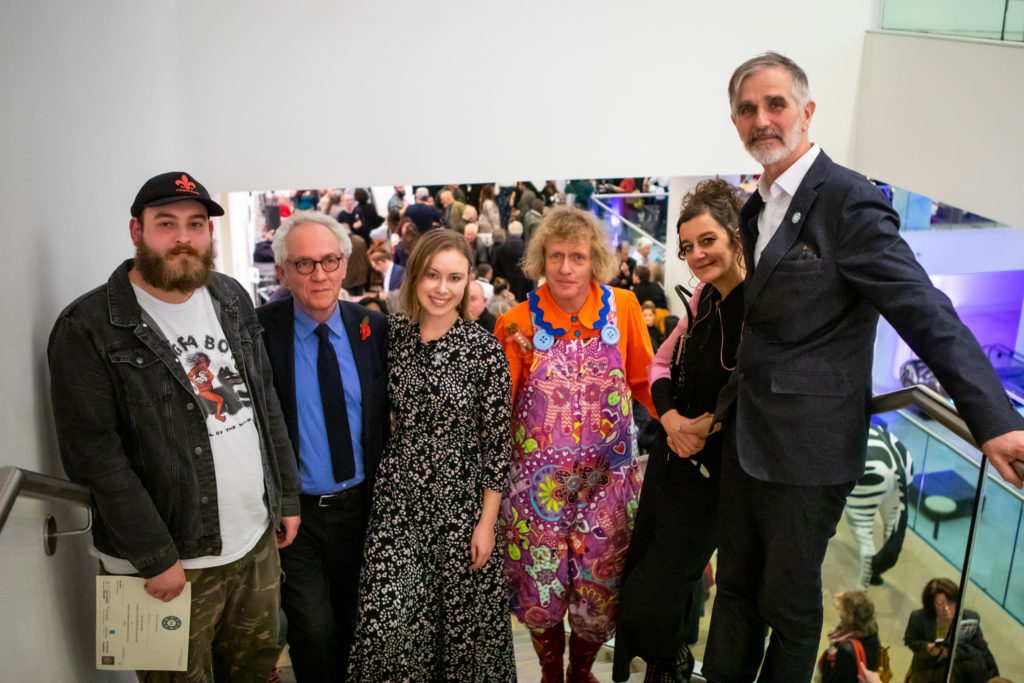 The winning work, made in felt tip pen is by Alan Payler and is called The Garden.  Alan’s drawings result from a gentle, delicate way of working where even large areas of colour are undertaken in small, careful steps. His pictures often combine small areas of detail with large areas of space and colour. Alan attends the Community Art Project in Darlington – a project for adults with learning disabilities. His work has been included in numerous CAP exhibitions. 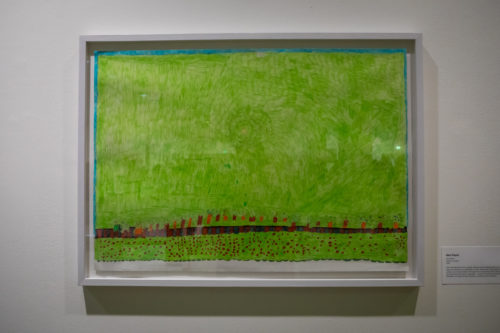 The first prize will be a solo exhibition in 2020 at Phoenix, one of Brighton’s major public arts institutions, whilst a second and third prize of art material funds will also be awarded.

Second prize has been awarded to Phillip Knights, titled The Conversation. Philip likes to create scenes populated with figures, machines and objects sometimes invented through his own imagination but also inspired by images from everyday source material around him. Philip attends the Community Art Project in Darlington – a project for adults with learning disabilities and has exhibited widely.

The third prize goes to Alasdair and is a tiny buddha in clay. He said:

“I started making art when I was aged 13. I get a pen and paper and it happens spontaneously.  It is the result of drawing for years and years. Sometimes my work represents how I feel, for example stressed or calm. There’s an aspect to art about what is aesthetically pleasing rather than how it makes you feel. I enjoy looking at other people’s work.”

Grayson Perry, as one of the judging panel, remarked:

“Art is a purely subjective thing. The winning work was the work of art that most closely aligned with something I would be happy to make myself and it gave me joy. Also, that I had never seen something like it before. I would  very much like to come and see Alan’s solo show in Brighton!”

Another of the judges, Cathie Pilkington RA, said:

“It is an incredibly moving and inspiring group of work. It’s been very difficult to choose a winner and I wish there were more prizes to give. The winner, Alan, managed to use such direct language and such simple means that was completely ungallopping, convincing and transporting.  Philip’s fantastic figuration was so inventive and Alasdair’s work was an example of wonderfully fresh figuration using the material to embody the spirit of the buddha. The two works made in felt tip and one in clay are all very direct and authentic. The ability to capture the bulk on such a small scale is quote something in Alasdair’s work, I was really pleased to be able to choose a sculpture within the winners.”

More than 900 artworks were submitted for the exhibition from across the UK and the Republic of Ireland. The successful works were then selected by a panel comprised of Outside In artist James Lake, artist Laura Ford and ActionSpace director and Outside In trustee Sheryll Catto. 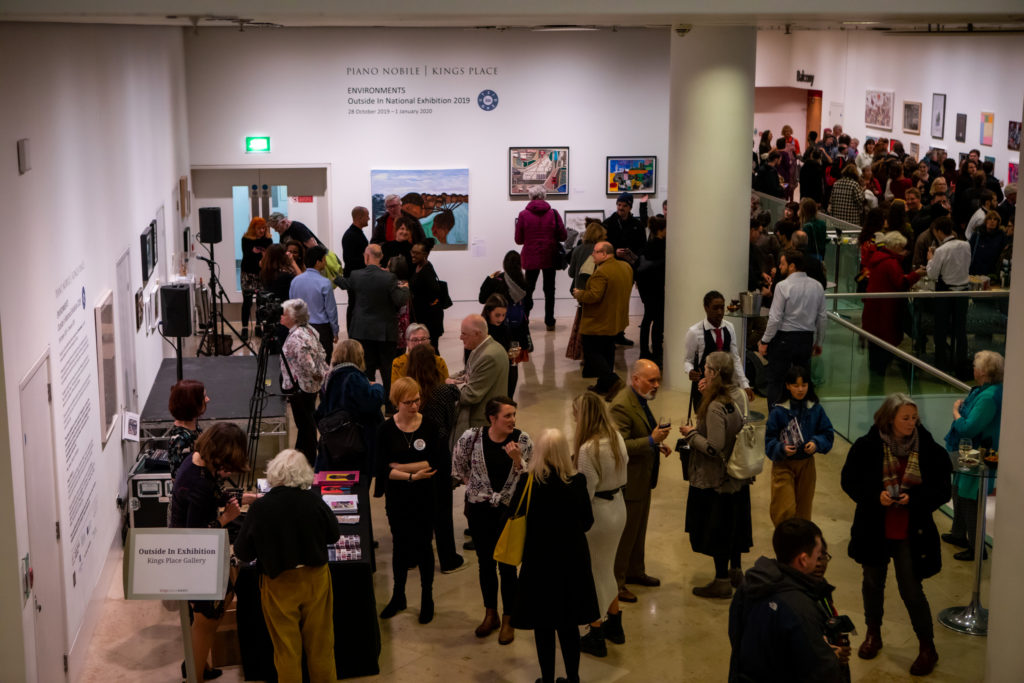 The crowd at the pening night

A call out this summer asked for artists to respond to the theme. Works could be in any form or materials and the artists could explore ‘Environments’ via their own perspectives on space, place and location. Inspiration could come from artists’ immediate environment; such as the city or the countryside, the impact of climate change locally or globally, or ideas about what future environments might look like, or how they might be experienced.

“The work the judges have chosen is wonderful and eloquent and full of joy. I am so pleased that Alan has won. The judges loved that all three artists were using non-traditional means to create work that speaks powerfully and with complete integrity.”

Works chosen range from digital print, photography, embroidery, assemblage and clay sculpture to works created with pen, pencil, chalk, oil paint, watercolour and charcoal. They include views of the countryside and inner city landscape, from New York City to the Scottish Highlands to the South Coast.  Also chosen are perspectives on daily life, from dancing in a party to taking the Tube, plus a wide range of abstract impressions and imagery inspired by nature and popular culture; cats, monkeys and The Beatles.

The exhibition is at Piano Nobile until 1 January 2020. More information about Outside In is available here.