Following a sell-out run at the Edinburgh Fringe Festival in 2016, Hijinx (Cardiff) in association with Blind Summit (London) are launching Meet Fred on a 50+ date tour around the UK next Fri 20 January at Chapter Arts Centre, Cardiff. Following the UK tour, Meet Fred will be touring Germany, Spain, Czech Republic and Holland. Meet Fred is a snapshot into the life of a potty-mouthed puppet with a feisty personality who fights prejudice every day. Fred is a two foot tall cloth puppet who just wants to be part of the real world: get a job, meet a girl and settle down. But when threatened with losing his PLA (Puppetry Living Allowance), Fred’s life begins to spiral out of his control. NB – contains strong language and puppet nudity.

Meet Fred takes a timely look at what it is to be disadvantaged in today’s society. Following an outsider who tries to make his mark in a world in which he needs support to surmount barriers, the show shines a light on how tasks like going on a date or finding a job present problems.

In an incisive and highly comical way, Meet Fred exposes the ridiculous situations some of the most vulnerable in our society encounter when their support is taken from them, exploding the myth that “we are all in this together”.

The 2017 tour of Meet Fred has been dedicated to the memory of actor Martin Vick, who was part of the original cast (as the ‘Stage Manager’) as well as being one of the shows original devisers. Martin, a renowned clown performer who had Down’s Syndrome, died in December 2016 following a stroke.

Hijinx’s Artistic Director and Director/Actor in Meet Fred, Ben Pettitt-Wade said: We are delighted to be bringing Fred to venues across the UK and Europe. The response we have had from audiences so far has been staggering and humbling. It is a bittersweet moment for Hijinx as we launch the largest tour in the company’s history, but without the talented actor and friend who has journeyed with us for so many years – Martin Vick. We will endeavour to move audiences in the way that he always did, with biting wit and touching poignancy.

Hijinx are one of the UK’s leading inclusive theatre companies. From their base in Cardiff, they create shows with casts that include actors with and without learning difficulties, and tour them across the UK and Europe. The cast of Meet Fred includes two actors with Asperger’s Syndrome and one with Down’s Syndrome, working as equals alongside four actors without learning disabilities. Hijinx are revenue funded by the Arts Council of Wales.

Blind Summit are one of the UK’s leading contemporary puppetry innovators. Their shows The Table and Citizen Puppet have enjoyed huge success in recent years, both at the Edinburgh Festival Fringe and on extensive national and international tours.

A full tour schedule for Meet Fred is available on the Hijinx website.
Tickets are available via the tour venues. Please click on this link to visit DAO’s listings for details.

Meet Fred is recommended for ages 14+ 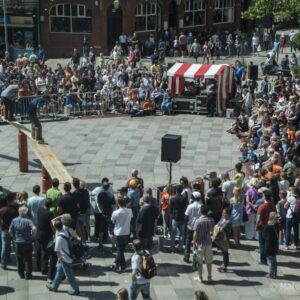 The countdown has begun for Hijinx Theatre’s unique line-up of inclusive and disability artists from Wales, the UK, Europe and beyond who will come to perform at the Hijinx Unity Festival in Cardiff from 23 June – 3 July. Once again, Hijinx Unity Festival will form part of Cardiff Festival, a programme of city-wide events ...