It sounds like a devastatingly tough film script, being in so much pain that it takes away your ability to work, to socialise, to care for your family, or even to move freely; but for over 18 million people in the UK with chronic pain – of which arthritis and musculoskeletal conditions are one of the biggest causes – this is their day-to-day reality.

These experiences are rarely shown or depicted accurately on TV or film screens, making people feel as invisible as their pain and enabling misconceptions about arthritis to continue, such as that it’s an older person’s condition. All this stops people from speaking up and getting the help they need.

That’s why Versus Arthritis has launched The Painful Truth: A Guide to Depicting Chronic Pain on Screen. For the first time, guidance for the TV and film industry aims to bring an increased and more accurate portrayal of chronic pain. 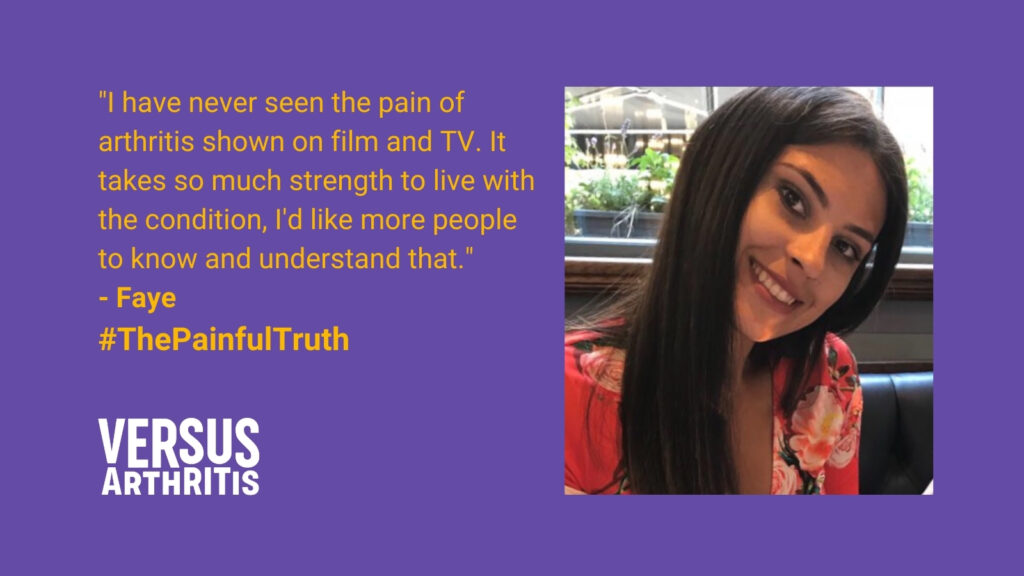 With research findings from nearly 4,000 people with arthritis and chronic pain, as well as input from TV and film professionals, this unique guide provides information about arthritis and chronic pain (defined as pain which has lasted more than 12 weeks despite treatment or medication). It also brings practical suggestions for accurate storylines and characters and features the personal experiences to illustrate what it’s really like so that society can begin to understand and so that people with pain feel represented, heard and seen.

Research from the charity highlights the huge impact of a lack of storylines and poor representation on screen, with a third (33%) of people with arthritis saying it has even made them less likely to seek out support. It also shows why TV and film need guidance as half (56%) of people with arthritis saying that TV and films don’t portray pain well, while nine in ten (87%) say their pain or condition have not been accurately represented by a character on screen.1

Versus Arthritis’ research also revealed that just six minutes of the UK’s most watched TV shows and films in 2019 featured chronic pain. But even when it did feature, it perpetuated unhelpful tropes, as there were no young characters living with painful conditions like arthritis, and characters hid their pain from those around them for fear of judgement.

Consequently, half (52%) of people with arthritis say they speak up less about their pain with family and friends and one in three (37%) report a negative impact on their mental health.

Faye Young, 27 from Bristol, living with axial spondyloarthritis and fibromyalgia said: “I have never seen the pain that I go through with arthritis shown on film and TV. It is upsetting. I don’t feel it’s represented in any way. If it was depicted on screen, I would be so happy as it would spread awareness of what people actually go through every day, like being bedbound by the pain, or so fatigued you can’t even drive home from work. It takes so much strength to live with arthritis, I’d like more people to know and understand that. It is not just the physical pain, but the mental and emotional pain we go through is truly overwhelming.”

Many people with chronic pain, a main symptom of arthritis, feel the TV and film industry has the power to make a real difference to how pain is understood and viewed. Four in five (83%) people with arthritis say that better portrayal of chronic pain in TV and films would help society understand the condition more. 1

“Living in pain can have a devastating effect on people’s lives, preventing people from caring for their family, being intimate with their partner, and even stopping them from having any chance of sleeping well. The invisibility of it on our TV and film screens has a profound impact on people’s sense of self and mental health, leaving many feeling forgotten and misunderstood. This is not acceptable. TV and film have incredible power to shape society’s attitudes; which is why we are calling on them to better represent pain.

“We’ve seen how better portrayal on screen of important issues has led to greater understanding. Now is the time for recognition and attitude shifts for chronic pain and arthritis.”

Jo Hemmings, behaviour and media psychologist, agrees: “TV and film play a powerful role in shaping our perceptions. Scientific research has shown that the portrayal of certain conditions and disabilities in popular culture has a direct and profound correlation to our response and therefore our behaviour towards them, sometimes softening our attitudes, sometimes hardening them.

“Popular culture can, and should, play an important role in progressing our attitudes and behaviours to create a society where the impact of painful conditions, such as arthritis is seen, understood and not tolerated.”

To read the guide and find out more about the campaign, visit Versus Arthritus