3 Years, 1 Week and A Lemon Drizzle is written and performed by sisters Alexandra and Kate Donnachie about the latter’s experience of life-threatening anorexia nervosa and the impact it had on their relationship. It played Underbelly Bristow Square 1-27 August as part of Edinburgh Fringe. Review commissioned by Dolly Sen as part of her guest editorship on Disability Arts Online, written by Joanna Matthews. Alexandra and Kate Donnachie in 3 Years, 1 Week and A Lemon Drizzle. Photograph: The Other Richard

Often in families people have a thing they get stuck with – in a good way or bad way. Kate’s (Kate Donnachie) thing is that she can bake cakes. It’s a possible fall back career option if the acting doesn’t always pay the bills. Otherwise, being the younger sister she struggles sometimes to snatch the spotlight away from Alex (Alexander Donnachie) who is not just taller but bigger in lots of different ways, is the first to do everything and ever so slightly controlling (a lot controlling from Kate’s perspective). Alex is the big sister and Kate the perpetual little one perennially bossed about and that is how it will always be.

Unless one of them gets stuck with being really really ill and then they have to work out how to do things differently, not always successfully – in fact, quite laugh-out-loud disastrously at times.

3 Years, 1 Week and A Lemon Drizzle explores what happens when two siblings with a close and loving relationship try to deal with one of them developing a mental health issue which threatens their life. This isn’t a play about anorexia nervosa, or a polemic on failing mental health services, or a guide to survival for others with an eating disorder. It is a beautifully crafted, very funny and sad theatrical experience about two engaging young women and their response to a shitty situation.

It is clever writing too. Using many different mediums (diaries, homemade videos, a cheesy game show, body art) it shows us ‘anorexia nervosa’ without telling us about the condition.

Cantering through their lives from toddlers to the adults they are now, we see and hear the impact that both the illness and Alex’s need to control situations has on her and Kate. Real food makes an appearance in the show, and as a performer, Alex does not shy away from demonstrating how uncomfortable her relationship with it has been.

This is as much a show about a sibling relationship as one about mental illness and it showcases elegantly that talking about mental illness can be done sensitively from the user perspective with humour. Other dramas on TV, in the cinema and in this festival fail spectacularly to get past the tropes and overcome the prejudices which still undermine serious and informed debate about living with mental ill health, its impact on other family members and unhelpful therapeutic responses. This play doesn’t fall into any of those traps.

The drama is structured so that the performance feels very real; as if the conversations and arguments are happening in front of the audience for the first time.  It is raw, like a wound that hasn’t quite scabbed over. However, clearly a lot of thought has gone into how best to tell this story and the Donnachie sisters are playing two characters called Kate and Alex with great skill.  The audience at the show I was at loved it, engaged throughout and generous with applause at the end.

Obviously, this is a play that deals with issues that could resonate painfully with people in the audience. The company make it clear in their publicity material what they play is about so anybody coming to see it knows upfront, plus there is a warning on the website.

They stay behind afterwards in case anyone wants to talk and Alex says that this often happens; both family members and survivors have had conversations with them. They don’t put themselves up as experts and Alex is clear that there are many different ways that people can successfully live with mental ill health; she has found a way that works for her and recognises that in telling her story it might support others.

It won’t be accessible to all audiences (there is no interpretation) but this show is my pick of the Edinburgh Fringe so far. It is really funny, quite painful and sad – like lives impacted by mental illness are. Above all, it is a great piece of theatre. 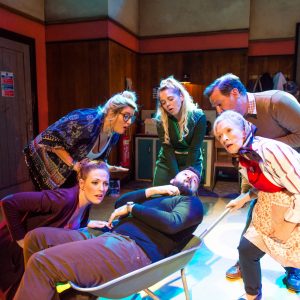 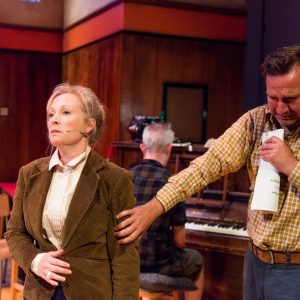 This year's Edinburgh Fringe has a preponderance of issue-based shows covering topics such as gender, race, disability, sexuality and equality. As the festival draws to a close, Kirin Saeed reflects on this trend of 'socially engaged' theatre at the Fringe. When I was asked to write an opinion piece on socially engaged practice, I firstly had ... 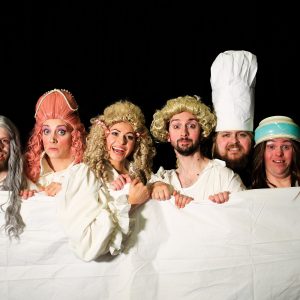 Hijinx and Spymonkey: The Flop

The Flop is a Hijinx production in association with physical comedy company, Spymonkey which plays Summerhall's Main Hall as part of Edinburgh Fringe 3-26 August. Commissioned as part of Dolly Sen's guest editorship, this review is written by Chlöe Clarke. A lot of silliness, clever wordplay and some very catchy tunes makes The Flop...well, unfloppable. Following their hugely ...